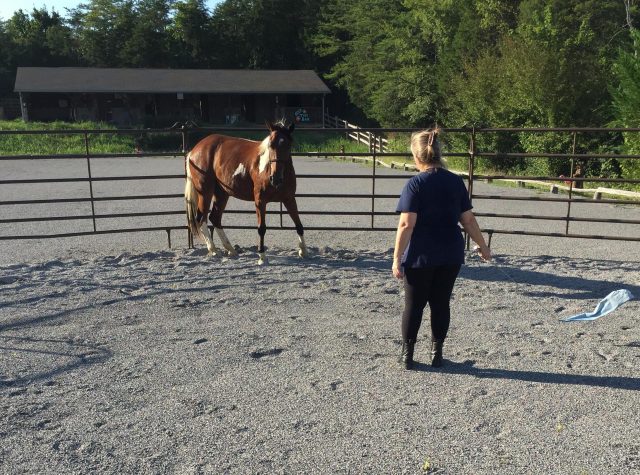 “Our jobs, our family commitments, our hobbies, and — perhaps most especially — our self-imposed high expectations of ourselves can seem like ‘just too much’ sometimes. Feeling overwhelmed? Read on.”

Google the word “overwhelm” and you’ll get the following definitions: “bury or drown beneath a huge mass; defeat completely; give too much of a thing to (someone); inundate.”

I’m gonna go out on a limb here and say I bet every person reading this column has felt, at one time or another, all of these things. Our jobs, our family commitments, our hobbies, and — perhaps most especially — our self-imposed high expectations of ourselves can seem like “just too much” sometimes. Feeling overwhelmed? Read on.

As August winds down and the leaves begin to change colors, I reflect back on the “summer riding season” of 2018 and, personally, it’s hard not to feel overwhelmed. This past spring, I had such high hopes for Kaliwohi and me. I felt certain we would confirm all three gaits and maybe even enter a training level show this autumn.

The reality is, I spent the past ten weeks off my horse, healing from two separate “unplanned dismounts,” with at least two more weeks to go before I can try, yet again, to re-establish a relationship with my horse under saddle.

From the perspective of “did I achieve my summer riding goals?” the answer is a resounding, “NO!” And that failure to reach my pre-planned goals makes me feel defeated, uninspired, and like an utter failure as Kaliwohi’s riding partner.

The day “the Great Fall” (Fall #1) occurred, there were children present near my arena, which is unusual. Kiwi and I typically ride alone and, since I live alone, the only sounds and movements we usually see are the other horses loafing in a nearby paddock, the occasional barn cat strolling about, and the various birds and bunnies and other wildlife that also call the farm home. Kaliwohi is used to these things. He is not used to children running and playing.

While I clearly understand that a well-schooled horse must learn to listen to his rider no matter what the outside distractions may be, the operative word there is “well-schooled.” In order to get any horse “well-schooled” one must increase their exposure to new things, true, but not all at once — not to the point where the horse gets overwhelmed.

The children, innocently scampering about and shouting in a merry game of tag, were — from Kaliwohi’s perspective — causing a ruckus that he simply could not process quickly enough. It was all too new. It was while he was being asked to focus and concentrate on bending and flexion and contact and “all the things” of a schooling session. It was simply too much.

It was, in a word, overwhelming.

As his rider, I should have kept Kaliwohi at a walk and asked the children to sit down and be quiet, not to coddle my horse at all, but to respect where he is in his education and training. The dressage training pyramid is in progressive steps precisely because a horse cannot achieve collection until it has mastered the other, underlying, foundational elements. Similarly, a young horse should not be asked to handle peripheral chaos while simultaneously being asked to focus on its training. Elite competition animals are given the respect of a quiet arena; surely a young, wild horse deserves the same respect, at least until he is gradually conditioned to extraneous stimuli. 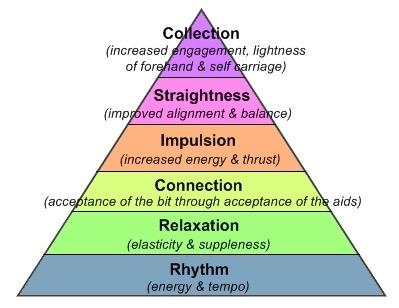 I now realize my mustang got overwhelmed. He became inundated with stimuli and simply could not process it all. As a wild-captured mustang, Kaliwohi’s self-preservation instinct of flight is highly developed and always his preferred response. In that moment of overwhelm, he reverted to his oldest habit — flight — instead of the new “habits” of trusting me and submission.

As I’ve thought this through, I realize I too am often tempted to revert back to my oldest habits — “self-medication” through food — when I am feeling overwhelmed. When my work schedule is too slammed, or I’ve overcommitted to do too many things, or I get overwhelmed in any number of ways, I still find myself wanting comfort food.

Learning to stand still and breathe deeply, instead of reaching for food when I’m feeling overwhelmed, is something that I still struggle with. Why? Because I know the food will make me feel better and calm me down. #dopamine

Standing still and breathing deeply? That will add oxygen to the body, true, but it means I still have to feel whatever emotions rose up to bring on the feeling of overwhelm in the first place. And forcing myself to experience those emotions takes effort and courage. Comfort food is so. much. easier. And yet so damaging.

As I continue to heal from Fall Number Two, Kaliwohi and I are working on strengthening our partnership in the round pen.  Below, you can see his progress in this series of photographs. (All photographs by Greg Bell. Click each photograph to open the full size.) 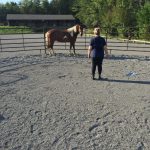 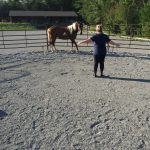 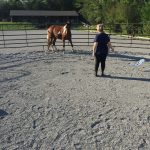 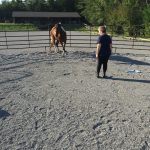 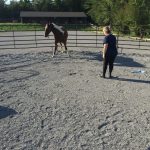 In this series, you can see in the first photograph I have stopped Kaliwohi’s forward motion by lowering all my energy; he is hooked on and looking at me, and waiting for my next instruction. In the second photograph, I ask him to open his front end and bent to his right. In the third photograph, I have lowered my left arm, because Kiwi understands which direction I want him to turn; I raise the flag in my right hand to keep him moving sideways instead of stepping forward/toward me. Maintaining the sideways motion will encourage flexion throughout the body, while allowing any forward motion will discourage flexion.

In the fourth photograph, you can see how much effort Kaliwohi is giving. He is crossing over at the knee and engaging his body very well. Because he is so completely engaged, I need ask for nothing else, so I continue to have a low-energy body position. In the fifth photo, Kaliwohi continues to engage his entire body, opening both shoulders and his chest to complete the turn. I maintain a low-energy profile and allow him to finish the turn without asking for more “try” because he’s giving such an excellent effort on his own.

These types of exercises help a horse relax and become more supple, just as yoga helps us humans gain more suppleness — and thus deal with “overwhelm” in a positive and productive way.