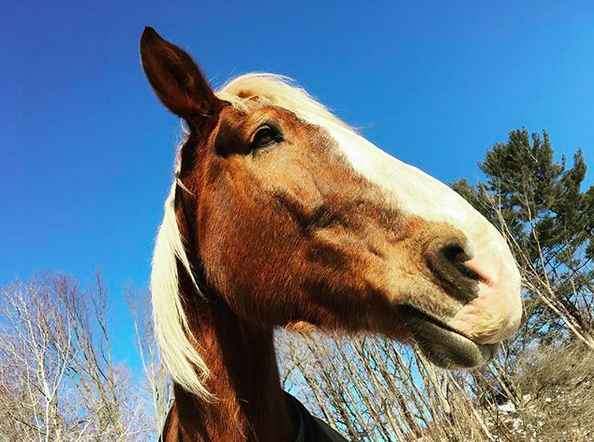 Draft horse drivers of the world, we’re simple folks — we’re usually farmers, the direct descendants of farmers or enthusiasts of traditional farming. Why else would we practice an expensive, time-consuming hobby that was rendered completely irrelevant by the invention of the internal combustion engine?

In my draft horse travels, I’ve found that this appreciation for a simpler time extends to our naming practices as well. There are about ten common draft horse names*, and I think I’ve met representatives of all of them.

*I obviously did not totally whip this number out of thin air at all.

If you’re looking to name your next team, here are two key guidelines:

2. When in doubt, alliterate. (“Rocky and Randy” rolls off the tongue better than “Rocky and Jeff.”)

Without further ado, the ten names of all of draftdom:

Randy: Randies are strong, bullish horses that could pull a barn if you managed to convince them it was a good idea. The trick is asking in such a way that they want to work for you, because Randies are also well known for throwing silent protests about things they’d rather not be doing.

Rocky (sometimes “Rock”): The aptly named Rocky or Rock is the cornerstone upon which your entire team is built, whether it’s a single cart horse, a pair, a four or more. They’re the overachievers who actually like working.

Max: A Max is a chronic overthinker. He’ll probably be a lip flapper, and the first horse on the team to start flipping his head if you’re standing still too long. You can work a Max as hard as you want, but his brain will constantly be working at the same time, trying to figure out new ways to worry about things.

Mike: Mikes are generally good guys who might be a little on the small side; you’ll constantly be thinking you want to replace him with something a bit bigger, but when you realize that your Mike is tough to replace in terms of attitude and reliability, you’ll accept the size disparity.

Dan: Dans only come in massive, blond Belgian with a blaze. They are quiet old souls — the kind that you can leave the lines looped over the hames out standing in the driveway, go in for lunch and come out a half-hour later to find Dan in the exact same spot, anchoring your wagon and his partner like a statue.

Ben: Ben looks perpetually old right out of the womb — he has that thousand-mile stare that pierces your soul and also looks totally vapid of expression at the same time. He’s the one that your neighbor’s kids are perpetually climbing all over like a random leftover bit of a jungle gym and he just keeps slowly grazing his way down the fenceline. Everyone wants a Ben.

Buddy: Need a pinch hitter to be your lead horse in the unicorn you never practiced but want to show? Looking for a horse who will stroll through the noisiest Fourth of July parade, getting buzzed by helicopters and giant inflatables? Buddy is your man. He is also the most likely horse in your herd to be able to pick locks and open latches. He’s worth the headache.

Duke: Like you would imagine, Duke is a classy gentleman whom if he were a person would spend the afternoons in a smoking jacket, and also maybe wears a monocle. In the hitch, he’s not the fanciest, but he’s certainly the most reliable, and that’s often much more important than how high your knees go.

Charlie: Charlies are free agents and your faith in them should certainly have a few hard and fast limits. They’re the most likely to get all jazzed up in the lineup or in heavy road traffic. If they’re a Belgian, they’re roan; if they’re a Percheron, they have socks that are perpetually stained.