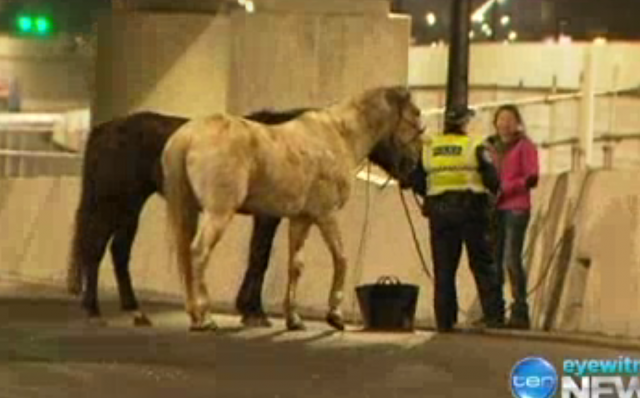 A routine trip with the horse trailer turned into every owner’s worst nightmare… but fortunately, there’s a happy ending too.

Every horse owner’s worst nightmare is an accident befalling the horse trailer — and for this owner driving through Adelaide in Australia, that nightmare was realized a few weeks ago when the trailer (also called a “float”) became detached from the towing vehicle, skidding down the highway and rolling over.

Fortunately, the trailer stayed intact, and while the owner initially feared the worst when the horses were found on their sides not moving, it soon became clear that they were actually protecting themselves, holding still rather than struggling. This likely contributed to the fact that with plenty of help from emergency crews, both horses were extricated and able to walk away with only minor injuries!

Footage may be upsetting to some viewers.

REMARKABLE SURVIVAL: Two horses are lucky to be alive after their float overturned on South Road. Their owner initially feared the thoroughbreds had been killed, but after a delicate rescue operation they're expected to make a full recovery. #TenNews

As described in the video, both horses were hauled without incident to a friend’s farm to recover and undergo a second vet visit, and are expected to return to the show ring soon!

As someone who has dealt with horses who suffered a trailer accident, I observe that horses generally (though not always) display a remarkable mental resilience — they don’t seem to necessarily equate the trailer with the fear or pain suffered in a collision. They willingly step onto a trailer again, putting their faith in us as drivers to keep them safe. May we continue to deserve that trust!