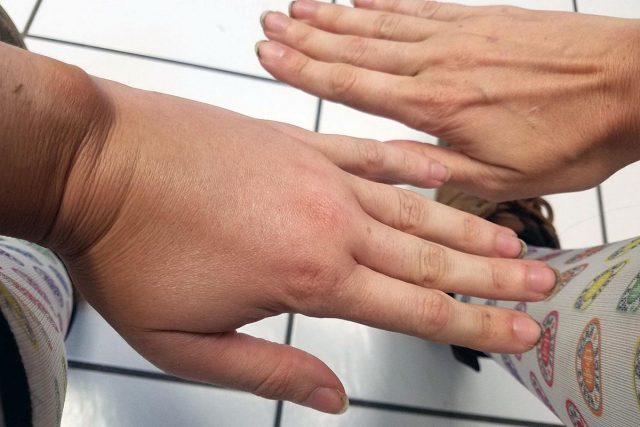 “There will come a time in your life where you will need to get a shot in your butt, and you will be wearing your disgusting schooling tights, your shirt will be wet with sweat, you’ll smell, and the doctor will be the hottest guy ever…” 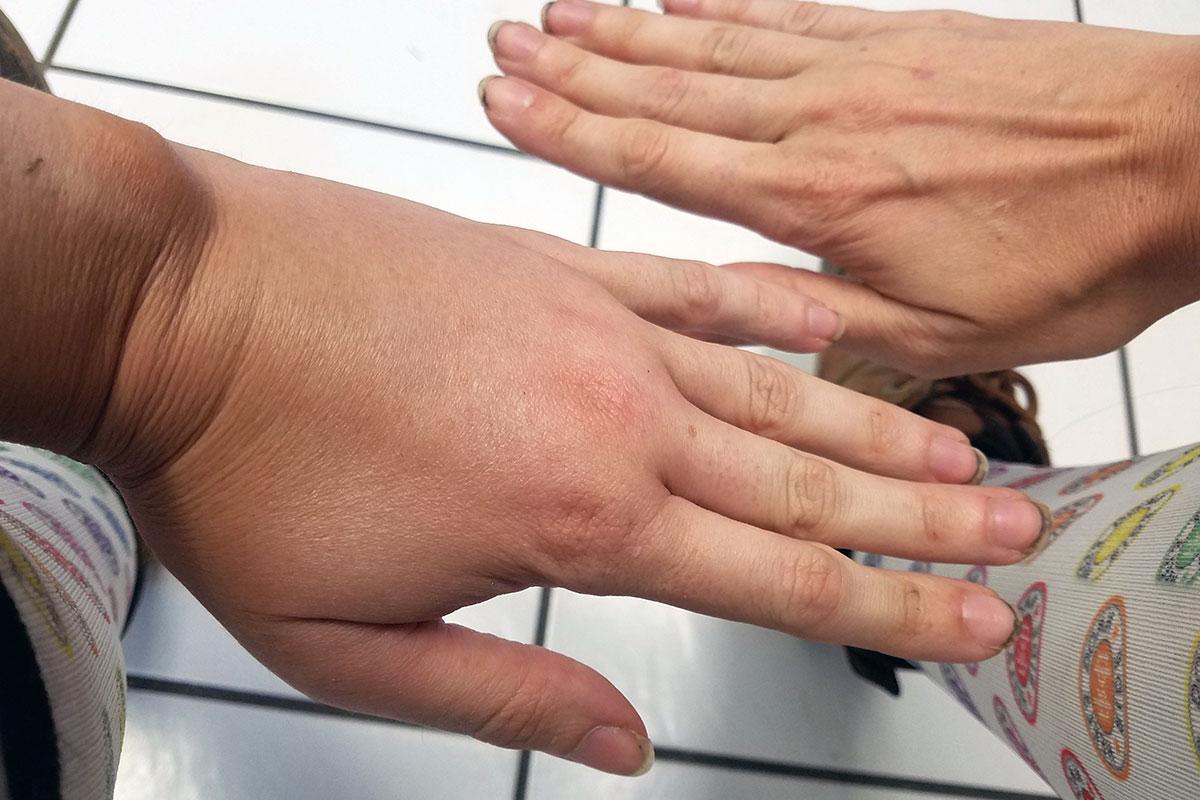 No, it’s not broken – all that drama for just a little ant bite. Ugh. Photo by Ainsley Jacobs / Ride Heels Down

A few weeks ago, I bought my first trailer from a friend. I was tired of bumming rides for JJ to/from events, so I gave in and got a 2014 Bee 2-horse slant load bumper pull. My Milym Equestrian team had decided we would go to the GDCTA Summer Finals Schooling Show this weekend, and I was excited to take my new-to-me trailer on its maiden voyage.

When I arrived at JJ’s home, Beaumont Farm, on Friday morning to load up, I was surprised to see one of the trailer tires was seriously low on air. I couldn’t find any nails or punctures, and it wasn’t audibly leaking, so I figured I’d just fill it back up and keep an eye on it. Whatever.

One of the other boarders at Beaumont, a wonderful gentleman named Frank, came to my rescue and lent me his portable air compressor. Well, while I was attaching it to the tire around 11:00am, I noticed some ants had crawled up the cord and were enjoying a delicious brunch courtesy of my hand. I flicked two of the little buggers off me and kept working on the trailer. I’ve lived in the south for over a decade and I’ve been bitten by tons of ants (including a few weeks ago at the USEA Area III Championships) and never had a problem, so I thought nothing of it.

After we got on the road, I noticed my thumb had started to swell a little near one of the bite spots. Whatever. No biggie. We got to Wills Park thirty minutes later, unpacked, and settled in.

My coach, Miriam, gave us a lesson that afternoon and JJ was feeling extra spunky. We hadn’t ridden at this facility before, and he looked for every opportunity he could find to act like a (very cute) butthead. He was totally jazzed but eventually chilled a bit by the end of the ride.

Around 4:00pm, I noticed my hand had decided to get all dramatic over nothing and swell up a ton more. Again, I didn’t think much of it, but a few of my friends said “umm, you should probably get some Benadryl, that looks bad.” So, my friend, lesson buddy, and owner of Mare Goods, Mary Campbell, drove me to a local CVS (because her car was parked closer and I was feeling lazy). I took a couple pills at 5:00pm and we went to watch some other riders do their schooling.

Even with the Benadryl, by 6:30pm, my hand had actually gotten worse and the swelling now encompassed my entire hand, plus it had started itching. I gave in and thought, okay, okay, maybe I should actually go find a medical professional because I really didn’t want to wake up dead in the middle of the night!

I threw JJ his dinner, made sure he had plenty of hay and water, and found an Urgent Care center five minutes from the show grounds – perfect! I drove over, checked in at 7:00pm, and they called me in almost immediately. When I told the intake doctor what had happened, he was SO surprised I had waited eight hours before coming in… I told him I had a horse to ride and take care of first, and he just laughed at what an idiot I was.

Next, he told me that not only was I certified not dying (yay!) but that I was going to have to get a steroid injection in my butt (not yay!).

Another (ridiculously handsome) doctor came in a few minutes later and he told me to drop my pants and bend over the table. Uhhh, bro, can you at least buy me a drink first? The shot itself didn’t hurt at all, but as soon as the steroid started kicking in my butt got instantly SO SORE and I was worried it was going to make riding the next day a literal pain in the booty. Fortunately, it dissipated and I drove home to find dinner. #Priorities.

Anyway, they put me on a steroid prescription for the next week and told me it would take a few days for the swelling to go back down to normal. My hand was so incredibly puffy that it was actually really sore from all the pressure, but I figured I could ride through it. I’ve dealt with worse and this situation was so insanely hilarious that I was too busy laughing at myself to be upset even a little.

There will come a time in your life where you will need to get a shot in your butt, and you will be wearing your disgusting schooling tights, your shirt will be wet with sweat, you’ll smell like a NYC subway line, and the doctor will be the hottest guy ever – just laugh it off and be grateful that you weren’t wearing granny panties, too.