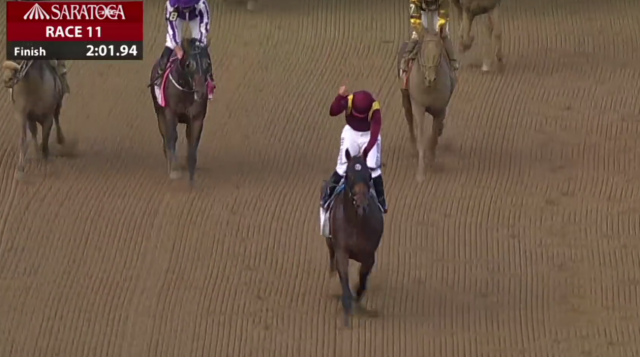 Catholic Boy demonstrated his remarkable versatility in a well-fought Travers Stakes at Saratoga on Saturday: watch the replay here!

In the vacuum left in Justify’s wake, a new star had to arise, and there were many poised in the wings ready to take up that role: Wonder Gadot, the darling filly of Canada; Good Magic, arguably Justify’s toughest second fiddle from the Triple Crown trail; or perhaps Mendelssohn, seeking redemption after a rough Kentucky Derby despite earlier runaway successes.

But Saratoga has a way of jumbling up what you think you can reasonably expect and giving you something else entirely — the Grade I Travers Stakes, after all, was the stage on which Keen Ice beat American Pharoah, among other more famous upsets. And while Saturday’s running wasn’t exactly upset material, the dominating victory by Catholic Boy certainly adds a new element of intrigue to the fall racing season.

Catholic Boy, already a Grade I winner on turf in the Belmont Derby Invitational, plus a Grade II win in the Remsen Stakes on dirt, settled in behind pace-setter Mendelssohn in the Travers Stakes. Wonder Gadot and Tenfold battled just a few lengths behind them, with Bravazo lurking in their shadow. Favorite Good Magic broke poorly, forced to go wide on the first turn and never fired; Gronkowski equally had no horsepower left.

At the top of the stretch, Catholic Boy opened up, quickly putting away Mendelssohn and opening a cruising lead on the rest of the field. There would be no catching him today.

Catholic Boy is owned by Robert LaPenta with Madaket Stables, Siena Farm and Twin Creeks Racing Stables. He is trained by Jonathan Thomas and ridden by Javier Castellano, who won his sixth career Travers Stakes on Saturday. Catholic Boy is sired by More Than Ready.

While there are no concrete plans yet for Catholic Boy’s next start, due to his versatility the colt could appear on either dirt or turf.