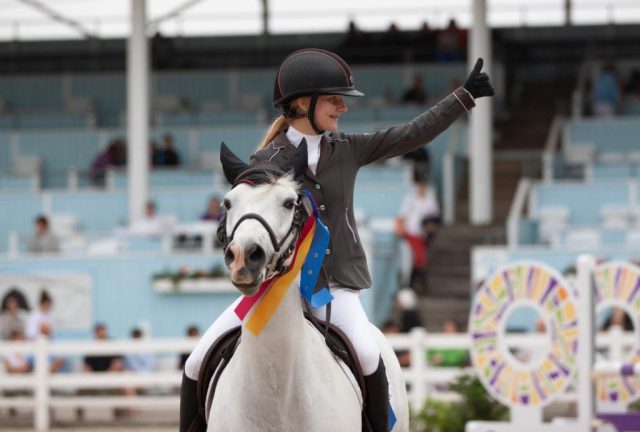 Fourteen-year-old Alice Nolen-Walston has always had a need for speed. This talented young rider transitioned from racing ponies around a track at Devon to scoring big in the Pony Jumper Ring in just a few years time. But that road hasn’t always been an easy one; Ali has had to overcome some trying challenges to get to this point in her riding career. With a little help from our friends at Draper Therapies, we connected with Ali to talk about her journey to this past years’ USEF Pony Finals and how she faces adversity head-on.

The Race is On

The daughter of an avid equestrian and equine veterinarian, it wasn’t a surprise that Ali was riding on her own at just three years old. While other girls her age were making their way around the short-stirrup ring, Ali was off chasing other dreams: flat pony racing and eventually Shetland steeplechasing. “I think the background in the pony racing really gave me a great start for jumping,” said Ali. “I didn’t really have a formal education in jumping at first. I would just go out in a field, put a fence up and say, ‘I can jump this.’ But it made me brave and gave me a taste of speed and jumping.”

And Ali was quite successful in the Shetland steeplechasing world. At the age of seven she was winning at huge venues such as WIHS, Devon and Central Park. “I didn’t really realize how big of a deal it was to win at those shows back then,” Ali laughed. “I have this safety vest that I used to ride in that was signed by all the top riders like McLain Ward, but at that point I didn’t know who they were. I just thought it was some guy signing my vest!” As Ali grew older, she knew the time was coming that she would need to retire her racing gear and give something new a spin but what she would do, she wasn’t sure. Then one day her mother got a call from a family friend about a pony they needed to place in a new home and Ali decided to give the pony a try.

“I remember we took her to Pimlico as a race pony. Usually in the races all of the ponies start out with the group but begin to weed out after a while. Not this pony. She went down the track on this loose, lopey canter while all of the other ponies galloped off. So, we knew she wasn’t going to make it as a race pony.”

While the family was away on vacation, they left that pony with their trainer in hopes that she could figure out what their new acquisition could be used for. Imagine their surprise when the trainer called them mid-vacation and said, “Oh my gosh some little girl just hopped on this pony and jumped around a 3’6” course and the pony didn’t even blink!”

Little did Ali know, but this would be the start of a transition in her riding career. She started off eventing with the little pony and worked their way up to novice before they felt she was starting to tap out a bit. Again, Ali was back to the drawing board and in search of a pony who she could continue to grow on.

In 2016 a special pony named Proven Theory, AKA Caleb, came into Ali’s life.  Aboard Caleb, Ali would return to the Devon show grounds for the first time since her steeplechasing days, only this time the fences were much larger. “I used to think I was brave,” joked Ali, “but 1.10m is really big when you are on a 14h pony!” Together the duo placed respectably in the Devon Fall Classic and she had her heart set on returning for the big spring Devon show.

But then Caleb came up a little off and Ali felt her dreams slipping from her grasp. “It was a dream of mine to do the Pony Jumpers in that ring,” she said. The family opted to put him in a field to allow him to rest and began their hunt for some sort of miracle.

In a twist of fate, a new pony came into Ali’s life. “We knew he had been successful in the Pony Jumpers previously, but he was coming back from six months off so we weren’t really sure what we were in for. And then the first time I rode him, he just ran off with me!” That ornery pony was Wishlea Star Dasher. The duo was off to a rocky start as they learned how to work with one another, but Ali was persistent. “The week before Devon we took him to a show and he was a totally different horse!” So much so, that Ali and Dasher began racking up ribbons together. Her Devon dreams were back on.

Despite all that Ali had slogged through earlier in 2017, she and Dasher entered the ring at Devon with their eyes set on the prize. The pair came in seventh, and then fourth, and to top it all off they won the classic and brought home Reserve Champion. “It was an insane feeling,” shared Ali. “I remember thinking if we could do this, maybe we could come back and do even better the next year.”

Together, the pair continued to climb the ladder in rankings. Almost every class they competed in throughout 2017, they were in the top three. When the Devon Fall Classic rolled around, they won two of their classes and were second in another, rounding out the division and earning them the title of Zone Champion. They were on a high like no other.

“We were doing so good and then two weeks before Devon spring, he started stopping. I remember thinking, ‘Here we go again, another catastrophe two weeks before Devon.’” Toss in a trainer switch and the fact that Ali’s hip dysplasia, which causes her to lose feeling in her leg, was acting up and the odds appeared to be stacked against them. With all that had been going on, all of Ali’s support team originally planned on nixing the idea of Devon in 2018 and just placing their focus on Pony Finals, but Ali knew they were destined to return. With everything that had happened just a few weeks earlier, Ali had one goal as she entered the ring at Devon: “I just wanted to get through the finish flags. I didn’t care if we hit all of the rails or if we ran through all the fences, I just wanted to get through the course.” In true Ali fashion, however, she and Dasher exceeded those expectations and brought home the Champion title. “It was truly an amazing experience,” she recalled. “After all we had been through before, this meant so much.”

Pony Finals and Beyond

Against all of the odds, Ali and Dasher made it to Pony Finals where their team came in fourth and Dasher was the recipient of the High Scoring Welsh Award. Finally, the pair can take a moment to breathe before they begin preparation for what is to come in 2018. They hope to compete in the WEGX Games and are entertaining the thought of showing at the American Gold Cup and the Royal Canadian. But, another change may be on the horizon for the young pony jockey. “I am only 5’2” now so I still fit on the ponies, but my dad is pretty tall so I think I still have some growing to do,” Ali said. “I am hoping to start the hunt for a horse at some point and maybe move up through the Junior levels if the budget allows.”

What else is in store for this ambitious young rider? “With my mom being a vet, I am inspired to go into medicine of some sort. I think maybe a doctor or a surgeon,” Ali stated. For now, though, you can expect to see more of Ali and Dasher in the Pony Jumper ring. “I don’t really know what is in store for the future at this point, but one thing I can say is I am so lucky to have had the ride on the horses I’ve had. It’s all been good ponies and good luck, but I am so thankful for all of these opportunities.”