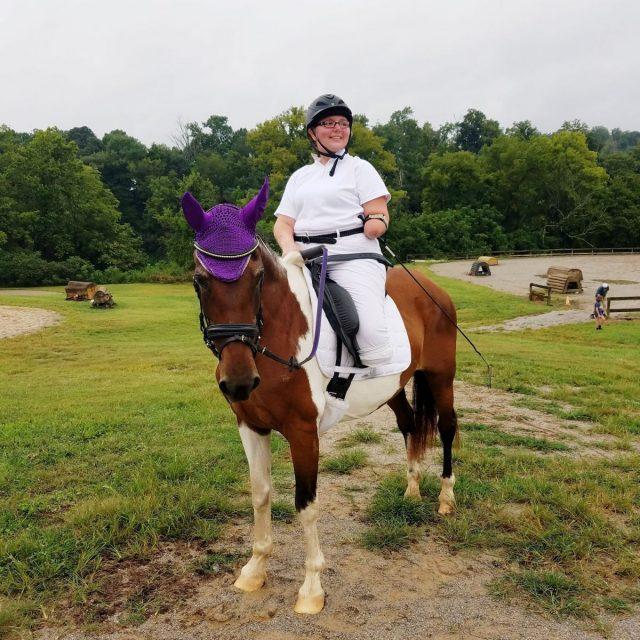 “Life is hard. You either take it lying down or you kick it in the ass! Or, in my case, #nubsomeass.” #TripleAmputeeEventer Jessica Thoma continues to inspire, returning to the show ring just eight months after losing both legs and her left arm. Jessica Thoma and Sugar at Dressage By The River, held at River Glen Equestrian Center. Photo courtesy of Jessica Thoma.

Earlier this year we shared the heart-wrenching yet inspirational story of Jessica Thoma, the 25-year-old Tennessee eventer whose legs and left arm were amputated in January of this year. For all her losses, Jessica’s determination to return to the saddle was unwavering, and horses have been her rock through both her illness and recovery. By late spring she was on the lunge line, but her sights were already set much higher than that.

“I have some really big dreams and plans and I have a HUGE support team cheering me on!,” she told EN. “I will do eventing again soon! Hopefully next year! #TripleAmputeeEventer isn’t just a tag I put on my photos — it is my dream.”

Jessica made a huge leap forward toward making that dream a reality last weekend, when she returned to the show ring at Dressage By The River. The competition, held at at USEA event venue River Glen Equestrian Park in Newmarket, Tennessee, was a happy homecoming for Jessica and her partner Sugar, a 20-year-old Spotted Saddle Horse mare she rescued from starvation in 2009 and calls her “heart pony.” Jessica and Sugar were stars, earning scores over 60% in both their Para test and USDF Intro A. Collective marks from her Intro test: “The girl with no legs and only one arm got an 8.5 in Rider’s Position!” Photo courtesy of Jessica Thoma. “I was on cloud 9 the whole day,” Jessica says. “My last show was over a year ago. I had some people who didn’t believe I would be able to ride again. Now look where I am! I have trotted, I have cantered, and now I have shown! The people who believed in me far outweighed the negatives, and for that I am thankful.”

Jessica was surrounded by a big support system of family, friends and fellow equestrians. She’s been training with Kaylen Moon, clinic-ing with Emily Curtis when she can, and is sitting tall in a new Custom Saddlery Icon Flight dressage saddle thanks to a community effort spearheaded by saddle fitter Kate Wooten. Jessica and her supporters. Photos courtesy of Jessica Thoma.

Jessica has prosthetics on the way, due to arrive this week — she jokes that she ordered equestrian specific lower legs with the heels already down. In the meantime, she hasn’t let the absence of limbs hold her back from pursuing her goals. Nor has she allowed it to dampen her spirit or sense of humor. The funniest thing from the dressage show: “Someone mistook me and Sugar for someone else! So I asked them if that person didn’t have legs either and she said she didn’t even notice. Kinda funny but also feels good!”

Since Jessica’s story has gotten out, thousands have begun following her social media accounts via Instagram (@TripleAmputeeEventer) and Facebook (Jessica Thoma). Often in her posts inspiration and dark humor collide. “Life is hard,” she recently wrote. “You either take it lying down or you kick it in the ass! Or, in my case, #nubsomeass.”

Her irreverent outlook makes some people uncomfortable, she says, but insists, “What even is life without a little humor? It helps to laugh at your pain.”

She’s also used her position to education others about interaction with disabled persons. “Please do not scold your children for staring and asking, ‘Momma, where are her legs?’ You are teaching your child that curiosity is bad, different should be shamed, and asking questions is wrong. I for one love it when children stare or ask questions. It is a great teachable moment!”

Jessica’s heart, grit and humor make it almost impossible to believe that, just one year ago, her normal life and limbs were still intact. But, she says, she’s stronger now than she was even then, and her strength is contagious. She motivates constantly with both her words and her actions. “Don’t ever let anyone put you in a category,” she says. “You are whatever you want to be. So with a horse show on the books, what’s next on Jessica’s horizon? She doesn’t hesitate: “More dressage shows! Walking! Jumping! Eventing!”