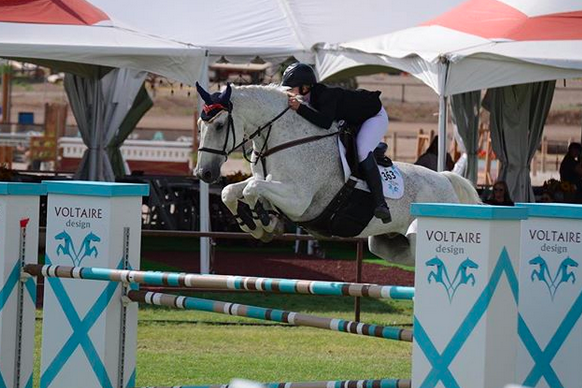 A broken ankle would be plenty to sideline most of us — but not Sydney Luzicka, who not only kept riding but proved she could be competitive!

Broken bones are usually a pretty good reason to back off on the training and riding for a bit, let oneself heal and recuperate. And while we may have just reminded equestrians that the lost art of self care is something worth striving for, we also have to salute the total ballers who don’t let things like catastrophic personal injury stop them from striving for those big goals. Sydney Luzicka is one of those people.

After suffering a broken left ankle in an accident at the end of April, Luzicka underwent surgery with plans for a fairly lengthy rehab, originally predicted to be at least three months before she could ride again. Less than a month later, however, Luzicka was back in the saddle — sans stirrups, but presumably with doctor’s permission!

Pretty safe to say that this kid can ride. (We’re also digging the bitless bridle on this gorgeous gray!)

Her most recent achievement came in the $40,000 Grand Prix de Santa Fe where she placed fourth — still without stirrups, against professional riders. Here’s a highlight reel:

A year ago today the most amazing creature ever entered my life! Today he jumped out of his skin and finished 4th in the $40,000 Grand Prix de Santa Fe!!! It was a very competitive class and congrats to Wallstreet RC on the win! So thrilled to have even been double clean in this class without stirrups, little did I ever think I would pin in the top 6!!! Thank you too everyone who came to watch and support me and thank you to my amazing parents and sponsors!

This is why we practice without stirrups, folks. This girl’s leg is just as solid as though she still had her irons — and if she’s this strong now, there’s no telling where she might go. Put her on your list to watch!

Thanks for the amazing pics @photos.by.amj I love them!!!!