Are you currently caught up in the throes of Mongol Derby fever? Are you finding yourself grabbing your phone first thing in the morning and heading over to the Adventurist website to see where your favorite dot is on the 1000 kilometer course? I for one can say that my mobile web browser is autofilling https://www.mongolderby.com/adventures/mongol-derby/key-details/ as soon as my finger touches the letter “m” these days.

If you can’t get enough of this daring horse race based on Ghengis Khan’s mounted messenger system ridden on semi-feral ponies, here is one more thing to add to your Derby daze. All the Wild Horses, now streaming on Amazon prime and Hulu, is a documentary that follows the 2015 running of the Mongol Derby and brings viewers along for the ride out in the vast Mongolian steppe.

I. LOVED. THIS. MOVIE! I can be a tough critic. I’m a nit-picky curmudgeon with a short attention span, but I can honestly say that All the Wild Horses had me on the edge of my seat for the entire 90-minute run time, and let me tell you why.

A documentary based on something like a 1000 kilometer horse race has a clear, built-in narrative, and while that narrative would have been enough to adequately hooked my interest, it was the care with which the subject matter was covered that made this film so special. One component that is frequently missing from documentaries is character development, and often when it is attempted, it’s done with a series of dry testimonials.

All the Wild Horses finds the magic formula for developing relationships between viewers and the featured riders without hitting us over the head with expository confessionals. They are able to find moments within the race that capture the essence of each rider. I found myself getting to know and care about each of the featured competitors as the film went on, and by the end I was 100% invested in all of their stories. Sure, there is some direct person-to-camera dialogue, but it all takes place during the race enabling viewers to remain immersed in the  unpredictable Mongolian steppe.

A group of brave riders on the Mongolian steppe. Screen grab from trailer.

In addition to the competitors, the film did a fantastic job showing just how integral the gracious Mongolian hosts and their herds of hearty ponies were to the overall success of the event. While there were clearly some cultural differences between the Mongolian locals and the multinational group of riders, I thought the film did a really nice job highlighting the common threads of humanity shared by all. 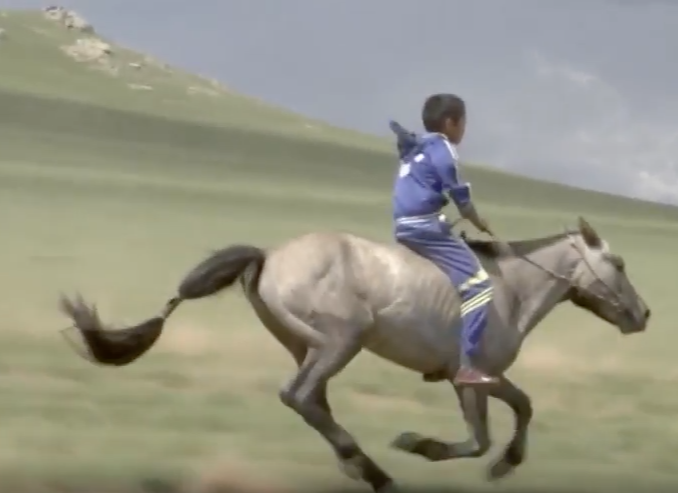 The Mongolian children exhibit a 6th sense when it comes to horses. Screen grab from trailer.

These touching human moments, as well as some heart-stopping catastrophes were stunningly captured with an artful eye behind the camera. I continuously found myself ping-ponging between the thoughts “Oh my goodness! It’s so beautiful! I need to sign up for the next Mongol Derby immediately!” and “Jeez Louise! Who in their right mind would voluntarily choose to do such a thing?!” I’m still not sure what side I come down on, but beautiful shots that felt neither low budget or overly produced have given me a lot of food for thought.

In what is a first for me as Horse Nation movie reviewer, I feel like I can confidently rate a film five out of five carrots, so that’s what I’m going to do!

All the Wild Horses is sure to delight viewers of all types from your hardcore horse addict to the person who’s equine knowledge stops at “They eat oats and apples? Right?” So what are you waiting for?! Jump on to Hulu or Amazon prime and watch this film right now!