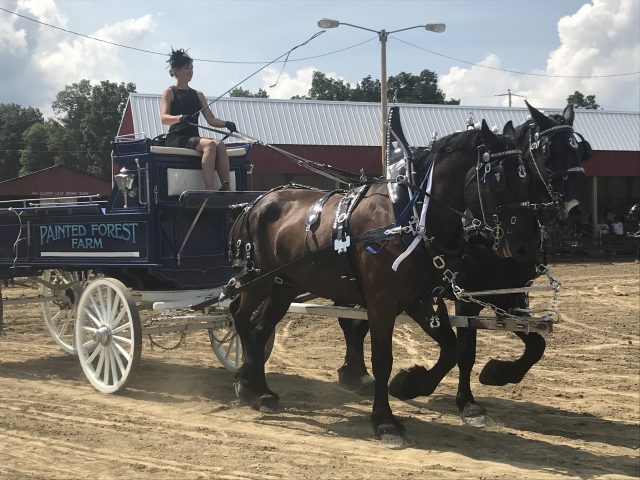 A county fair includes a horse show, but no horse show is like the county fair. Kristen Kovatch counts down six recognizable features of the fair that any other fairgoer will love.

I’m fresh off a three-day show at the county fair — well, fresh might be the wrong term, as I still have that famous horse show hangover that’s one part sleep deprivation, one part overexertion, one part dehydration and two parts euphoria, shaken over ice. For the recreational draft horse owner, the county fair circuit is hands-down the most affordable, relaxed way to show your horses while still enjoying things like decent judging, good competition and an appreciative audience.

Those three days had all the best parts of horse showing: those friends you only see at shows, plenty of competition, the chance to see how far you and your horses had come since the last show, friends to cheer on, weird hours, lots of shampoo and braiding and that feeling of utter happy exhaustion at the end of the day. But since this was the county fair, there were a few other factors not typically found in your run-of-the-mill horse show either. For anyone who’s ever been lucky enough to show their horse at the fair (county, state or otherwise), this one’s for you.

1. There’s a giant freaking carnival going on about ten feet from the show arena.

At our county fair, there’s actually a decent amount of space between the carnival rides and the show ring, but there was definitely some sort of BMX bike show going on, a giant inflatable bulldog (because why not), some sort of outdoor fire patio commercial exhibit and of course beyond all THAT, the light-up noise-making rapidly-unpredictably-moving shrieking-fairgoer-carrying carnival rides that occasionally blasted loud music. Great place to be showing horses, am I right? Especially big giant ones tied to wagons.

In my husband and sister-in-law’s youth, they claim that one year fair leadership had the wise idea to put the big cat show (complete with lions and tigers) right next to the show ring. I’ve yet to prove that this actually happened, but somehow I don’t really doubt it. 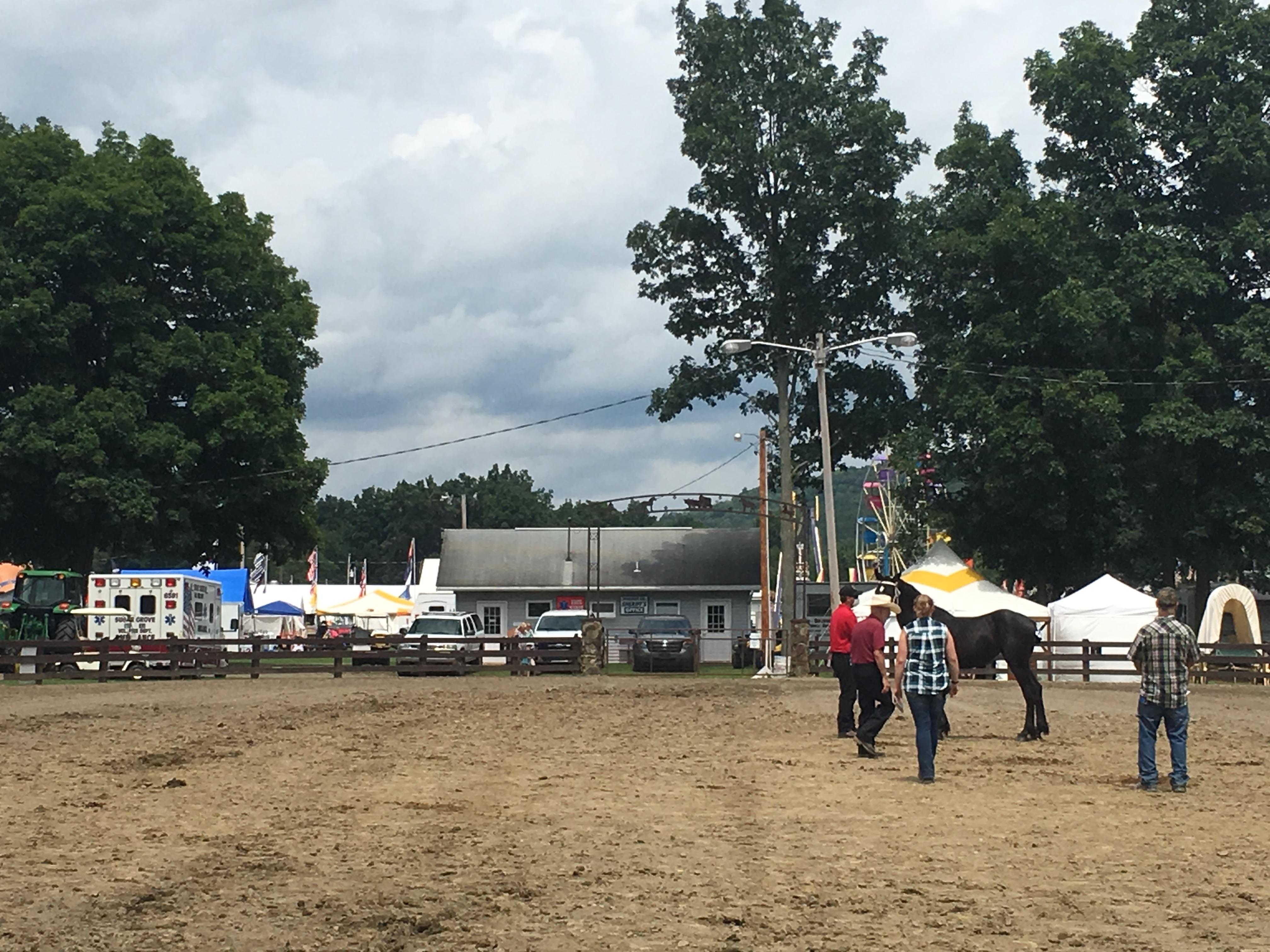 The only big-scale show I know of where you can see a little bit of almost everything in one day is the Devon Horse Show and Country Fair, and they don’t do any western. Open show day at the county fair is literally a hot mess (seriously, it’s always about 89 degrees with 95% humidity) but in one arena there’s a steady procession of equitation, gambler’s choice jumping, the costume parade, western pleasure, single draft horse driving AND riding and saddleseat. It may take about 13 hours to get through all the classes because it’s entirely volunteer-run and they insist on following the least logical arena schedule known to man (why not put all the over fences first thing in the morning so you only have to set the course once? Anyone? Anyone?) but it sure is fascinating to see draft horses in full show regalia pound the ground followed immediately by English pleasure.

I imagine it’s the closest living relative to the original country horse show, in which a bunch of dudes showed up with their plow horses and field hunters to see who had the best one of each.

3. Horses don’t like cows/chickens/pigs/sheep/whatever? They will after this week.

While I have plenty of great memories from hitch day last week, one distinctive sensory experience is thinking back to standing in the lineup, the unmistakable sensation of my shoulders and back definitely sun-burning as sweat runs down my face, trying to convince my equally hot draft horse to stand quietly while the judge completes his inspection, dust slowly filtering through the air in the wake of the trotting of eight draft horses and carts, all the while listening to the “beep… beep… beebeebeebeebeebeebeebee” of the guinea hens in the nearby poultry barn just going to town.

Horses scared of chickens? Not after being stabled next to them all week. The squealing of pigs bother your steed? That’s too bad. One unlucky (or lucky, depending on your point of view and prior cattle experience) pair of draft horses got the pleasure of being stabled just over the wall from Eddy the ox and got to contend with him leering at them while they tried to eat their breakfast. Your horse will be friendly to all farm animals after a week at the fair. 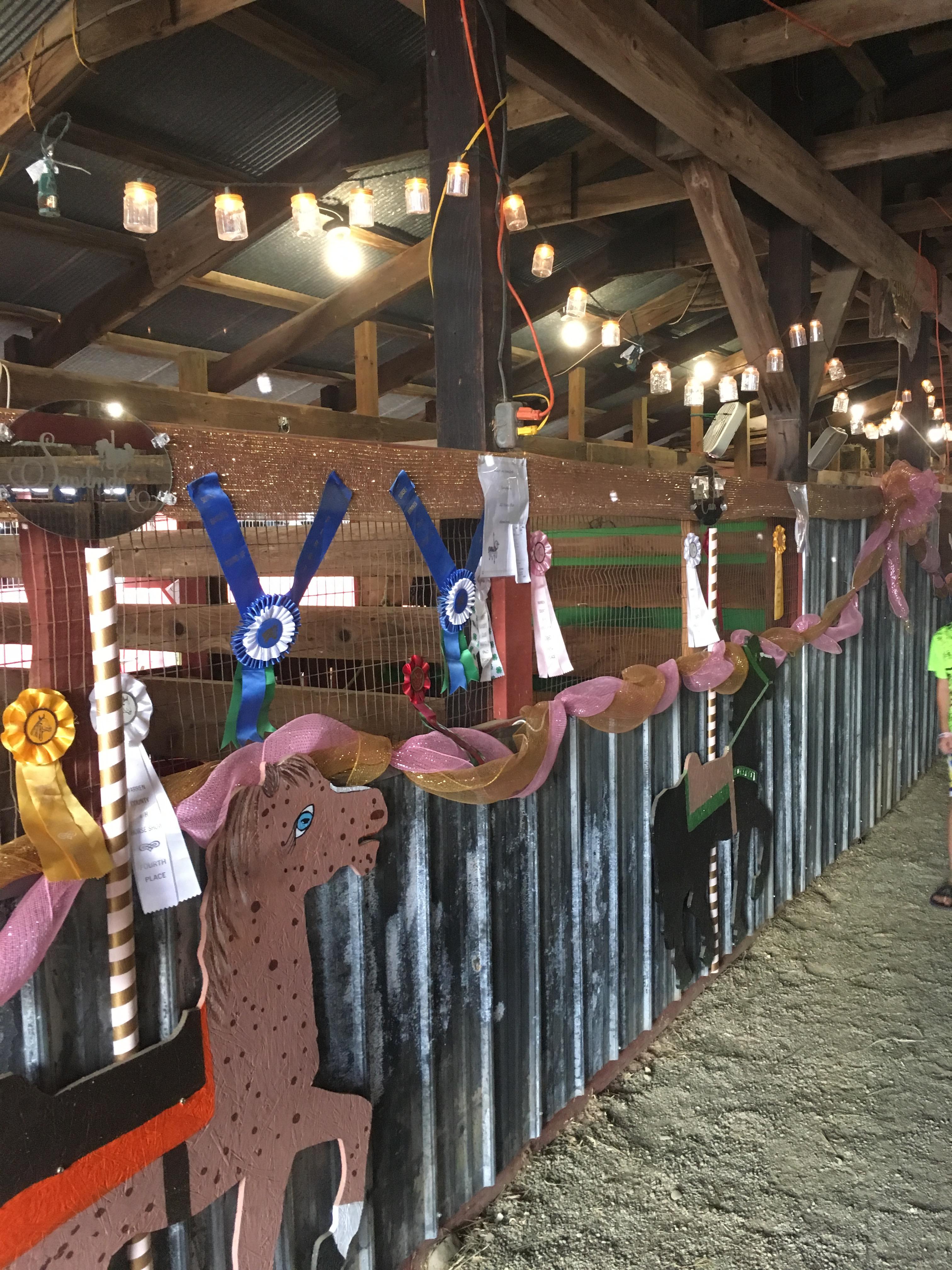 4. Any illusions you had of being on a diet are thrown right out the window.

I mean, it’s not like most horse shows are known for having an array of totally-healthy options either, but when you can put up your horse and then stroll a few feet down the midway and treat yourself to a basket of deep-fried Oreos and mozzerella sticks, you’ll never want to show anywhere else ever again in your life.

There IS a salad and sandwich stand for those health-inclined people, and if I were going to be there all week long I’m sure I’d take advantage of it — but when I’m in and out daily for just the three days we’re showing, then heck yes, I’m going for the Oreos. The fair only rolls around once a year, anyway. #noregrets

5. You will answer the same five questions all week long.

While a regular horse show usually draws a few spectators that wander in to see what’s going on, the fair draws hundreds, if not thousands of local folks with all the family in tow, wandering through the barns and petting the animals and perhaps getting introduced for the first time to the magic of horses — especially the draft horses. I personally choose to see these interactions as the possible opening door for the next generation of would-be horse lovers, and make sure I answer all the questions that every fairgoer asks us… even if we’ve heard it a thousand times before.

“What kind of horses are these?” (Percherons, originally from France, one of the most popular breeds in the United States because etc etc etc.)

“How much do they weigh?” (Around a ton apiece, maybe a little more, a little less, depending on the individual)

“How tall are they?” (Eighteen to nineteen hands, and then follow up with an explanation of what a hand is)

“What are those?” (Generally pointing to the chestnuts, which can launch a long explanation of evolution, which admittedly some fairgoers don’t believe in, so that’s a fun conversation)

“Why is his foot propped up like that?” (In a world in which PETA would have you believe that a resting hind foot means the horse is lame, this is a particularly valuable opportunity for some education) 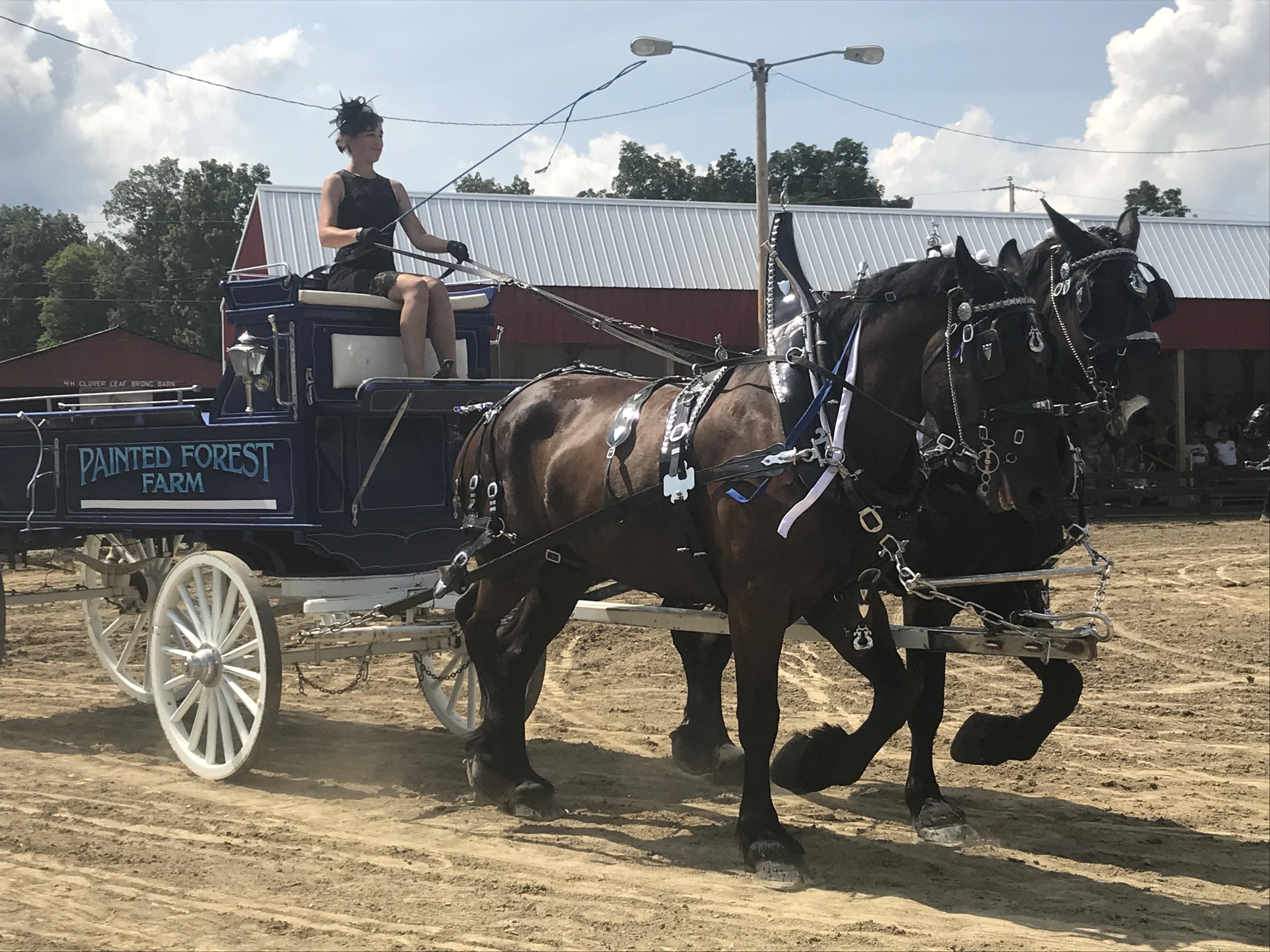 Sometimes you actually show a little too. Photo by Erik Bentley

6. Showing is only half of the fun of being there.

When you’re done showing at the horse show, you put up your horse, maybe sit in the barn aisle with your barnmates or hang out ringside to cheer for your friends. If it’s a one-day show, you load up your trailer and roll home.

At the fair, you finish putting up your horses, grab all your friends and hit the midway. While we generally now steer clear of the carnival rides, there’s something to be said for acquiring whatever fair food you desire to eat that day and meeting up with everyone in the bleachers to watch the 4H kids show their cattle, or stroll through the sheep barn yet again just because you can, or sneak into the D-list country concert, or watch the woodsman’s competition or draft horse pulls or falconry show or whatever other weird thing the fair has brought in this year. 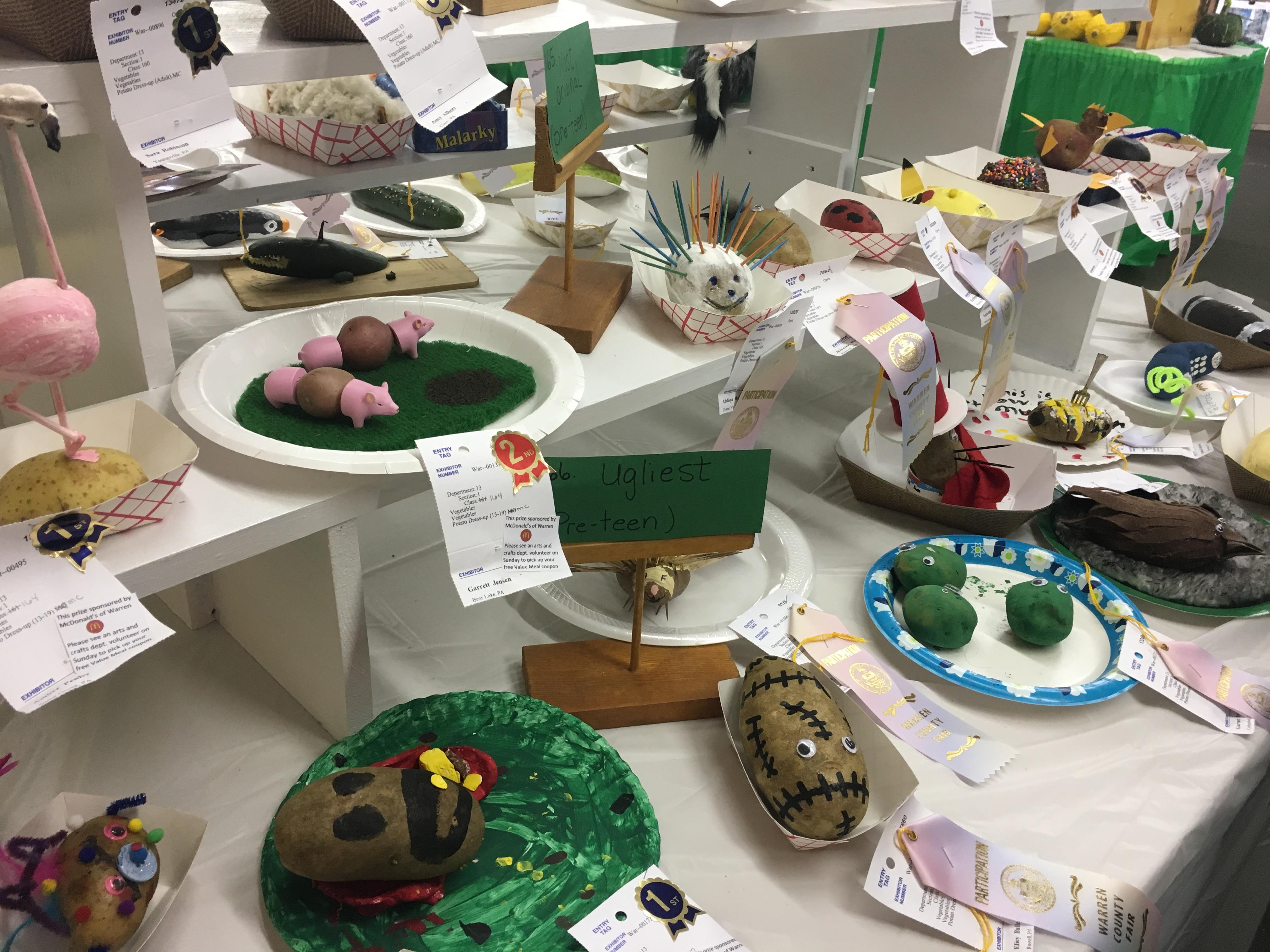