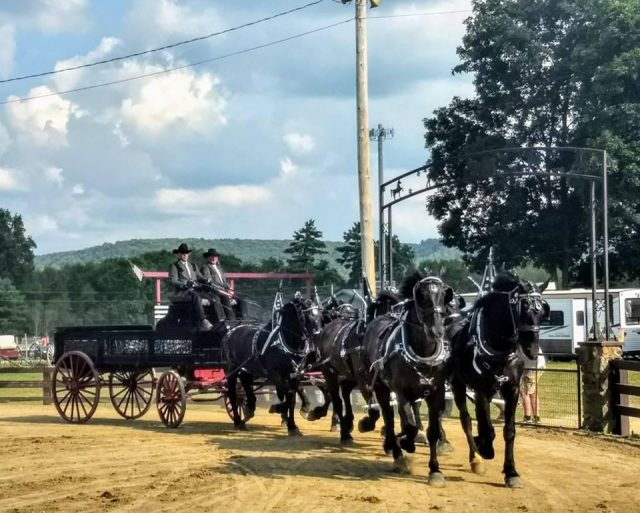 “The drivers on the bench expertly turned the team into the in-gate, and the first six-horse hitch in twenty years rolled back into the fairgrounds with a quiet rumble like distant thunder.” 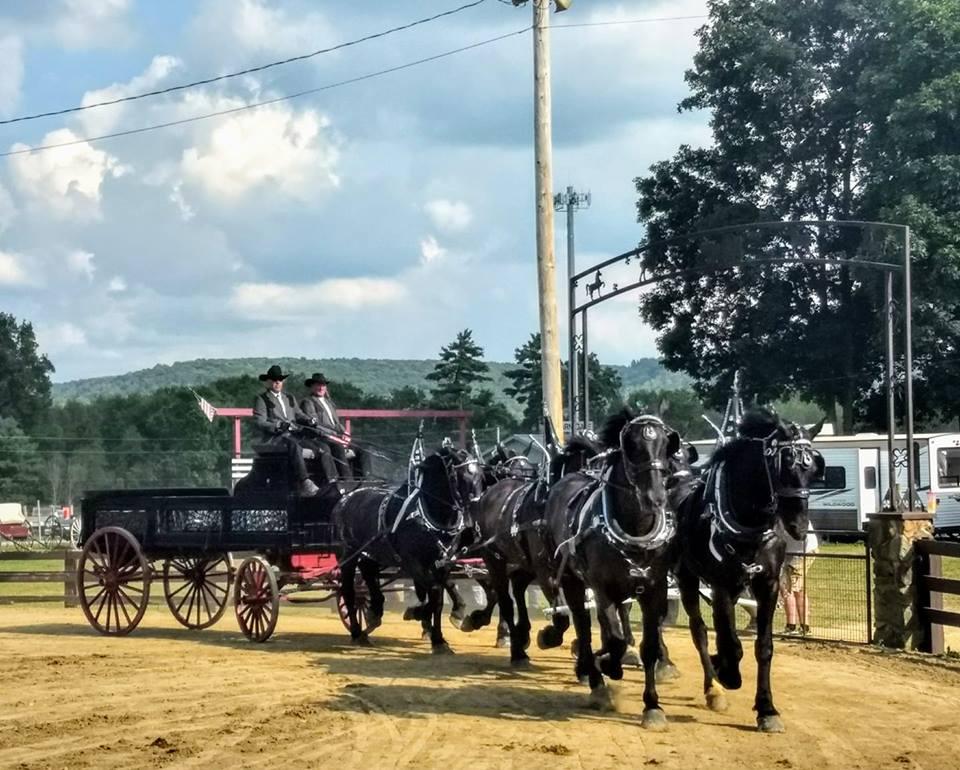 Twenty years had passed since the last time a six-horse hitch had rumbled into the show ring at the Warren County Fairgrounds. Hundreds of horses and rolling wheels had kicked up plenty of dust over those two decades in various configurations — cart horses, farm hitches, unicorns, three- and four-abreast, the tricky single tandem or the four-horse hitch — but the last classic six-horse hitch had come and gone a long time ago, nothing more than a memory now.

It took a brave and confident driver with no small amount of skill to drive a six, and certainly it took six reliable horses who worked together well, plus a full company of ground support and extra equipment and the investment of time to put a six together. Very few of the teamsters brought any more than four horses to the fair any more; numbers had been gradually dwindling over the past few years. Draft horses themselves, of course, were an anachronism now: a symbol of a bygone era that would never come back again, a bit of history still lovingly preserved by a few horsemen keeping the old ways going.

And by us. The scene must have looked a bit like an anthill to a casual observer what seemed like two dozen people flitted about six horses standing on the parched and dusty grass on a hot August afternoon, the show ring eerily silent as the fairgoers waiting in the stands murmured quietly amongst themselves, their eyes across the ring to where we worked to put together the first six-horse hitch that the county fair would see in two decades. 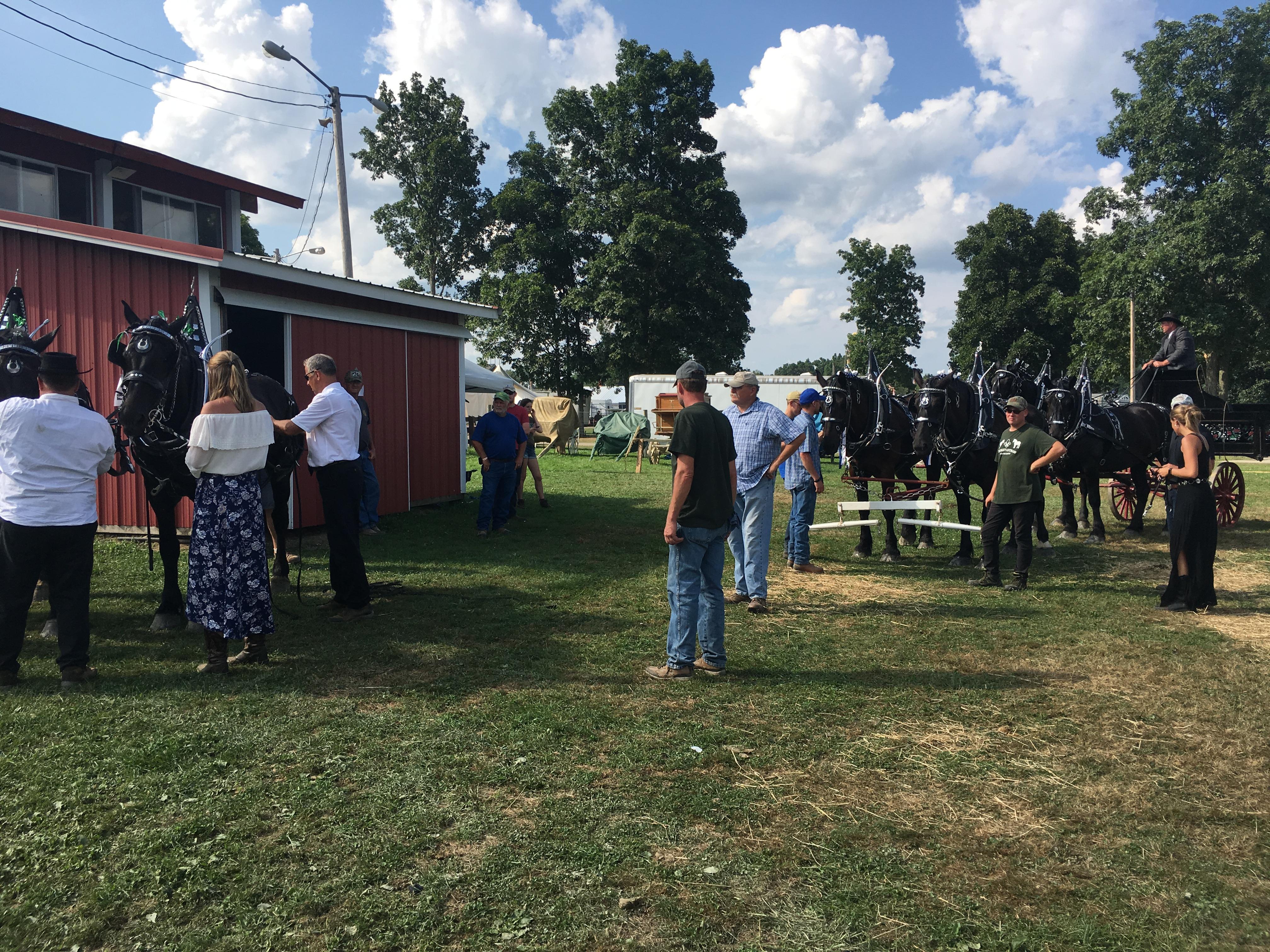 The six was a long-time dream and a combined effort of three farms: the Swanson family’s Silhouette Acres, the Spellings’ Brokenstraw Percherons and our Painted Forest Farm. The Swansons and Spellings worked together, owning horses in partnership and regularly combining their hitches for the unicorn or the four; in more recent years they had brought us into the fold in the fair barn, with all of us gathering at the end of a long day showing to relax and unwind and chat and pour another cup of coffee. It was likely over one of those friendly and familiar circles that the idea of hitching a six first emerged.

Independently, we had three strong teams: Silhouette Acres’ Percheron mares were always solid and would make up the wheel team, the only team with the ability through the hitch to actually stop the wagon. The Spellings’ geldings would be in the lead, the most reliable team to be that far away from the driver with only his voice and his lines to guide them. And in the swing, the linchpin holding this entire thing together, would be our geldings Chuck and Derek, a tough and reliable team that was getting better and better with each passing season.

The pieces came together slowly but steadily — bits of harness were added as each pair was hooked up and backed in to the hitch, lines passed up to Mr. Swanson on the bench, a header on each horse to hold him or her steady as handlers and assistants fluttered about to hook up additional tongues, eveners, rings and lines, at once foreign and familiar. The spectators in the stands, despite the heat of the day and the amount of time it took to put this hitch together, waited patiently, as though they knew they were in for a real treat. 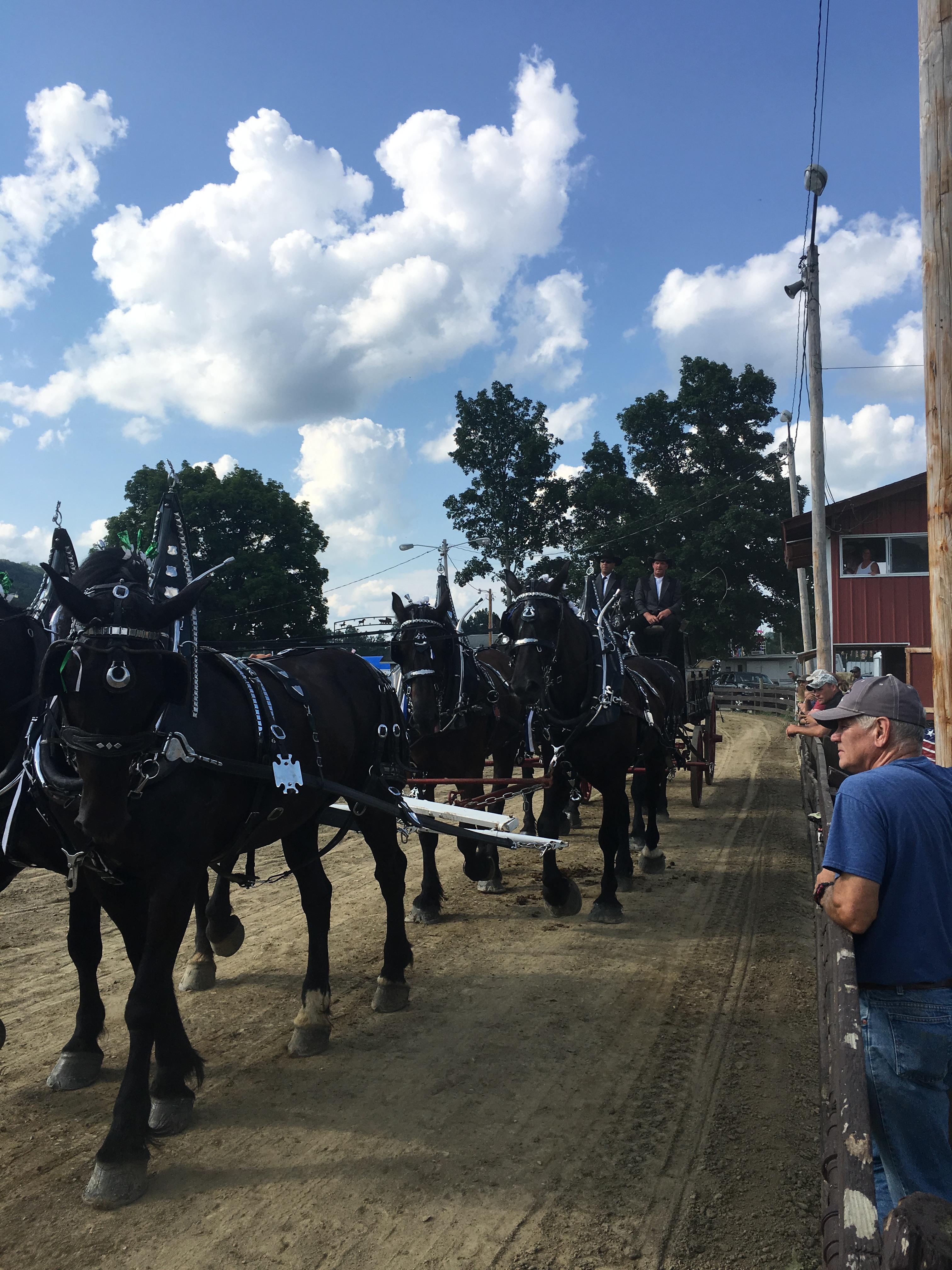 Barry tightened the lines. Six heads lifted, twelve ears flicked back and then forward as he raised his voice. In unison, hesitantly for the first step and then with confidence, twenty-four hooves stepped forward, manes and mane rolls fluttering in the wind, the polished steel on the harnesses catching the light, the chains rattling as the six Percherons stepped forward to fill the traces.

The Swanson daughters and I clutched each other’s arms in joy as the wagon rattled forward and a whispering rustle flickered across the stands as the hitch rolled into view. Swanson and Spelling on the bench expertly turned the team into the in-gate, and the first six-horse hitch in twenty years rolled back into the fairgrounds with a quiet rumble like distant thunder.

They picked up a trot together, six horses moving like pistons, moving as though they had done this every day of their lives. The sum of them was greater than their individual parts, and as I glanced up and down the rail where we had spread ourselves, Spelling and Swanson and Bentley and assorted family and friends from all three farms as helpers, I knew what it was to be part of a team, working together to create something truly special. We were not individual farms or families on that afternoon — we were one team, working together, just as our six horses pulled together out in the ring.

Great hitch day at the Warren County Fair! Dave won both the cart and the pair hitch, plus the special award for best hitch pair. I placed fourth in lady’s cart and second in lady’s hitch. @chloe_pty in her show debut placed third in senior youth cart in an adorable moment of genuine surprise; Hunter won the senior youth cart and placed third in the senior youth team. A fabulous day for Painted Forest Farm! The crowning moment that really represents what the fair is all about was when we hooked up the six, the first time this hitch has been hooked here in several years. It was a combined effort with horses coming from the Swanson and Spelling families plus our Chuck and Derek as the swing team. It took a village to physically get this hitch hooked up and we were so excited to see it get to the ring for this exhibition. The fair is all about teamwork and cooperation even though there’s also plenty of friendly competition, and this moment seeing our horses coming together really encapsulated that spirit in a moving way. Until next year!

A post shared by Kristen Kovatch Bentley (@thehorsebackwriter) on Aug 9, 2018 at 7:29pm PDT

Our six horses moved proudly together as the spectators cheered and clapped, and many of us on the rail may have wiped a tear or two (the dust, I’m sure). The team reversed, halted on a dime, trotted another lap as our generous judge narrated from the announcer’s booth about what it had taken to put this team together. 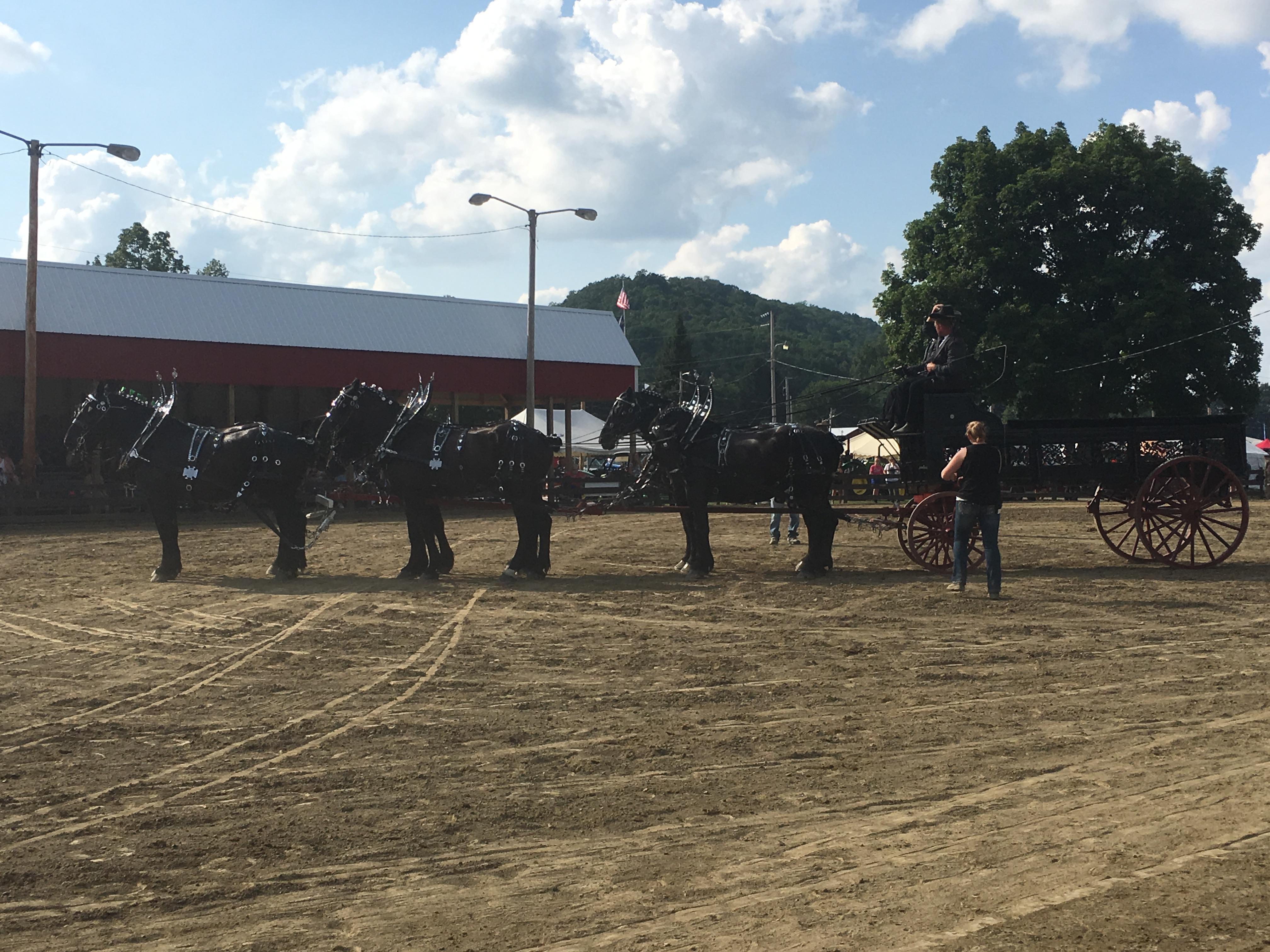 All too soon, the six was trotting back out of the ring, smooth as silk, the great metal gates slowly swinging shut to bring the draft horse show of the fair to a close for another year. In a few days we would all go our separate ways again, horses vanning off to various corners of the surrounding counties to go back to their own barns and stalls and paddocks, hooked back to their own working wagons, and we would all go with them, dreaming of the time when we were a piece of living history, pulling together as one. 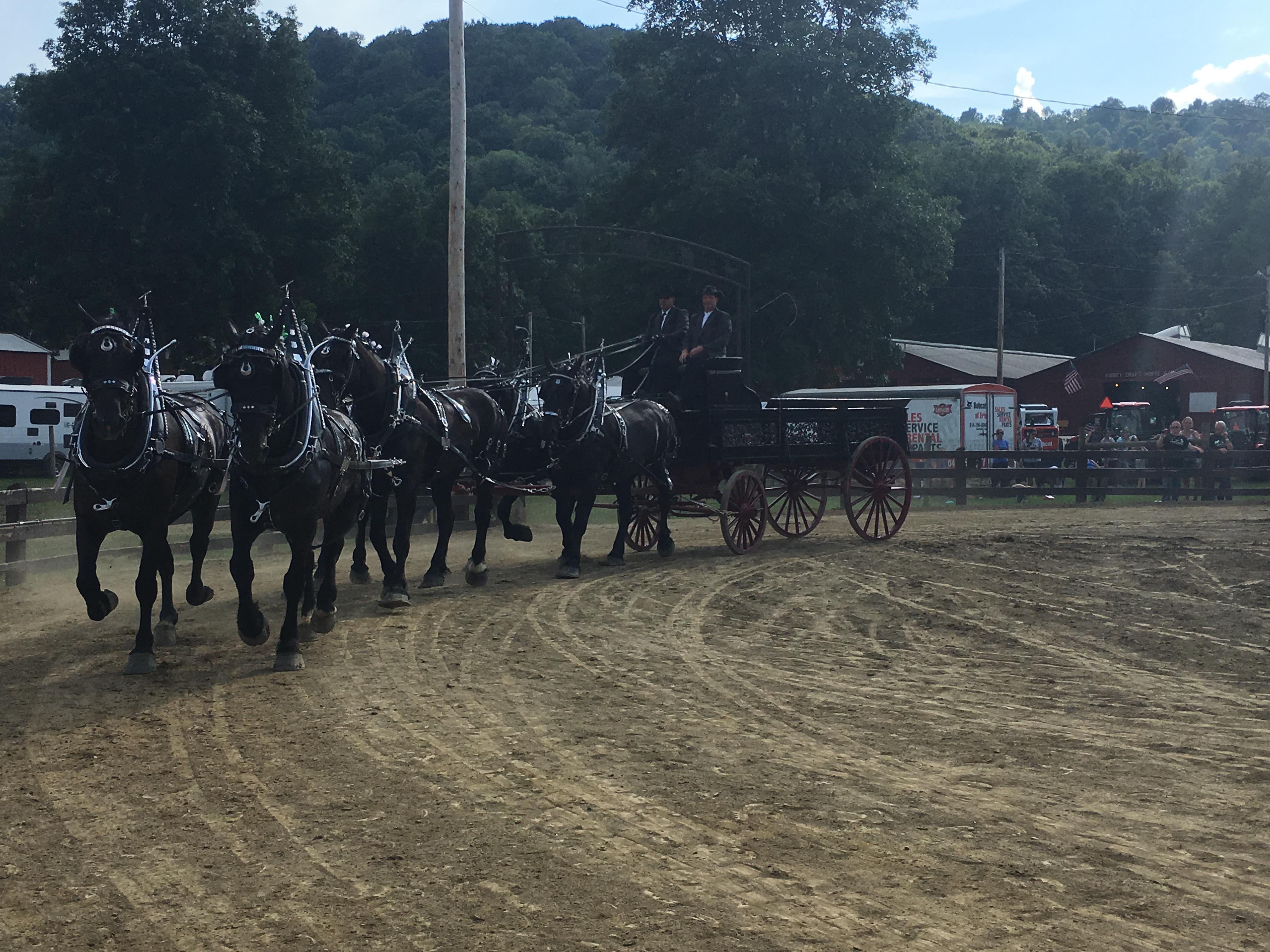