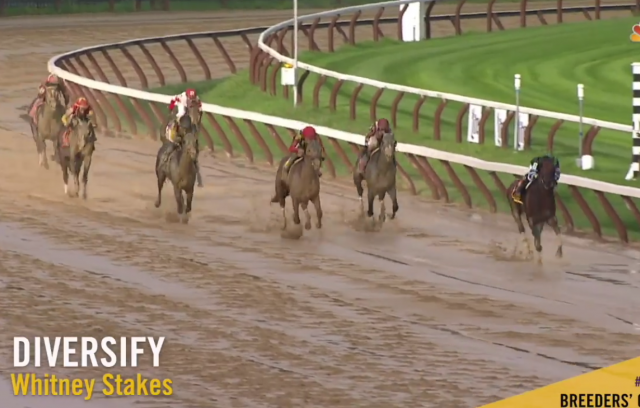 Diversify trailblazed in a very sloppy Whitney Stakes on Saturday, marking himself as one to watch for this fall’s Breeders’ Cup Classic.

While the phrase “putting one’s eggs all in one basket” comes to mind when we think about the sensation of free-fall in the racing world right now with the early retirement of Triple Crown winner Justify, leaving us grasping without a clear star to root for in the late summer/autumn stakes, it’s in fact an exciting time to be a racing fan. By taking Justify out of the picture, the fields for fall’s big races, not the least of which is the Breeders’ Cup Classic, remain wide open, letting new stars be born and old stars flare back up into prominence.

One of those stars could very well by Diversify: a five-year-old New York-bred gelding, Diversify won the 2017 Jockey Club Gold Stakes and last month’s Suburban Stakes for owning father-daughter team Ralph and Lauren Evans. If his Whitney performance  from Saturday, August 4 on Saratoga’s iconic main track is any indicator, 2018 could be his year.

Diversify wins the Win and You're In Whitney Stakes

WATCH: Diversify wins the Grade 1 Whitney Stakes at Saratoga in style, and earns an automatic berth in the Breeders' Cup Classic Churchill Downs this November.

Evans demurred when asked about the Breeders’ Cup Classic, hearkening back to 2017 in which the horse won the Gold Cup but sat out the championship. The Dubai World Cup and Pegasus World Cup are on the table, as is a return to the Jockey Club Gold Cup.

Wherever Diversify goes next, we’re sure there will be a legion of new fans to cheer him home.