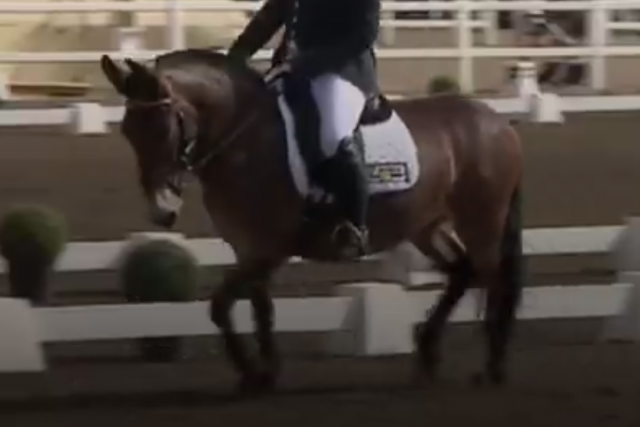 Britain’s first legal dressage mule made quite a splash in his official debut!

The horse world was abuzz in early July, first when the British Dressage organization stated that mules could not enter competition, and then again a few days later when the organization changed its rules to allow “Wallace” with Christie Mclean to enter.

Mclean was seeking a fourth equine to enter for the Team Quest competition, and has been training Wallace for entry-level dressage for his owner Lesley Radcliffe, competing at unaffiliated levels. Wallace came through the Sidmouth Donkey Sanctuary as a rescue.

Despite public outcry of “equine racism!” Mclean remained classy in her public statements, taking the stance not that British Dressage was being blatantly prejudiced but just that its rulebook remained old-fashioned (language in the rulebook simply states “horses and ponies” rather than “equines”). When British Dressage changed its rules to allow mules like Wallace to compete, Mclean entered her mule — and won.

Half horse – half donkey. Meet Wallace the Great.

Wallace the mule makes history after being rescued by Sidmouth Donkey Sanctuary ?

Welcome to the world of recognized dressage, Wallace. Go riding!