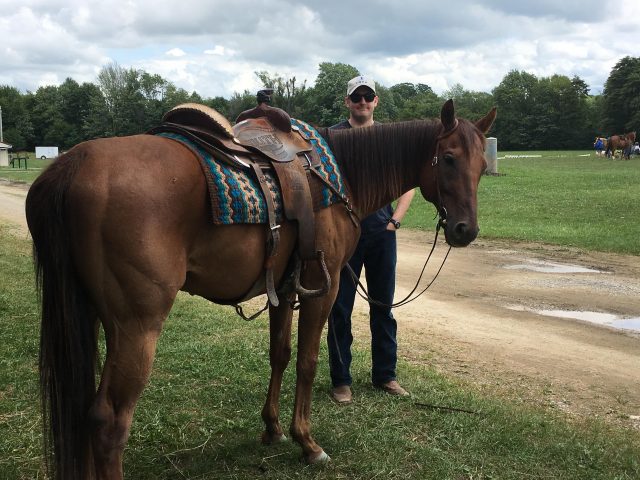 “It’s not easy to admit, but very few of us are perfect horsemen.” Kristen Kovatch loses sight of her ultimate goal with her OTTB Jobber, but finds her way again thanks to the heart of her willing horse. 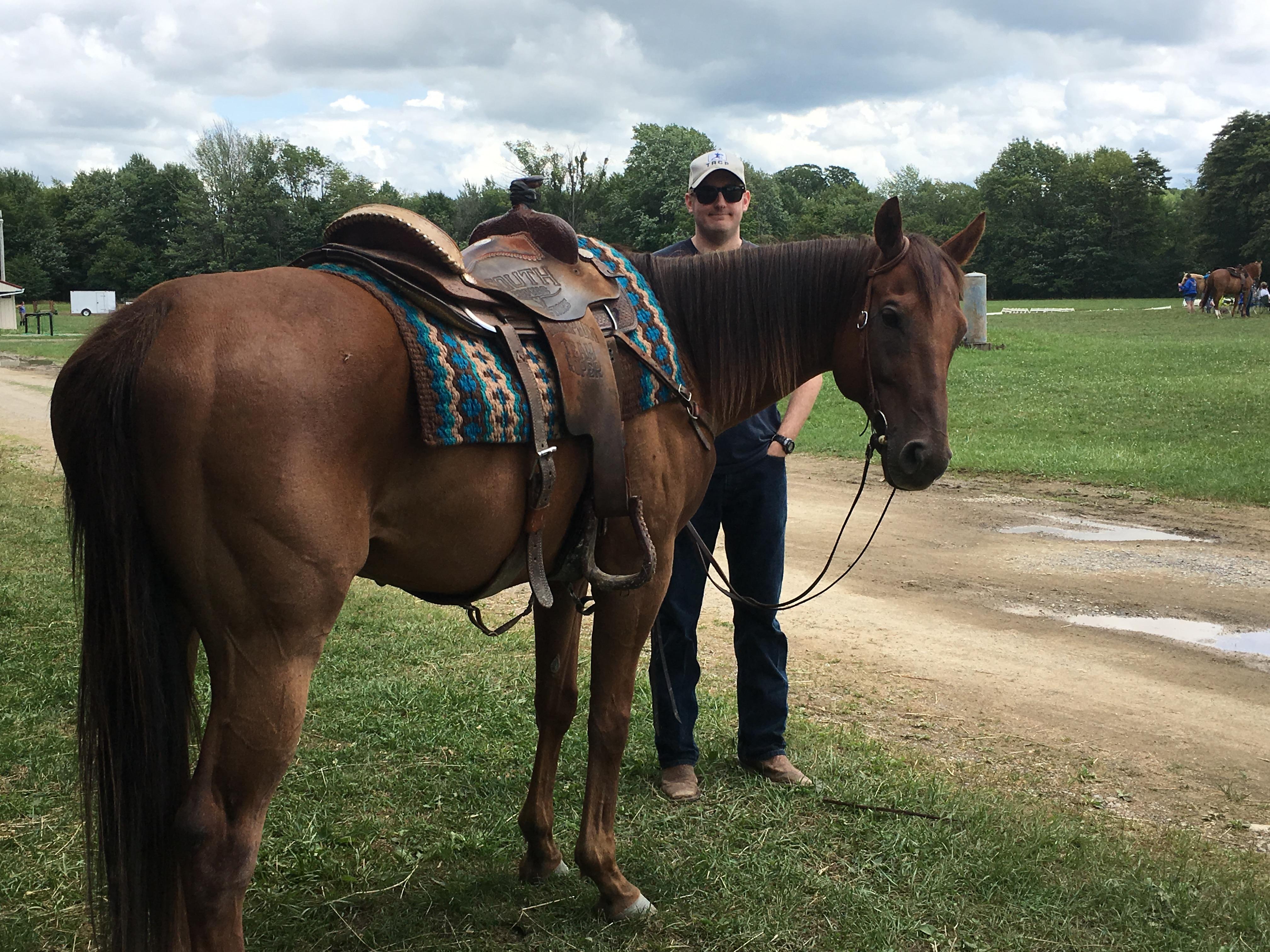 Jobber and the best show helper ever. Photo by Kristen Kovatch

For a few weeks, I lost sight of my end goal with my OTTB Jobber: a willing, well-broke mount that would be my partner for years to come in work and in play and who would serve as an ambassador to his breed and his heritage.

For a few weeks, I let the sensation of the deadline of the Thoroughbred Makeover start haunting my steps, the nagging feeling that there were only 90 days — and now more like 60 days — to go until the big event, a sudden self-imposed deadline to have Jobber “ready.” Ready was vaguely defined in my mind, lacking any concrete details of what that would actually look like, but I was suddenly feeling as though we were in real crunch time.

And that’s the reason that deadline retraining events come under such scrutiny from critics: they say that horses are rushed to be “ready” too soon, cranked into the semblance of good training with gadgets that create false self-carriage and generally harried along to be presented as a finished product by the time the challenge or makeover event or big show rolls around.

If that’s true, why would I admit that I was blinded temporarily by the allure of being the best at October’s Makeover? Because I’m fairly confident that we’ve all done it: at some point in our horse lives, all of us who have trained or prepared for a major event or show have rushed a horse. We’ve all lost sight of what should be our end goal of happy, healthy horses and good horsemanship. We’ve all been dazzled by ribbons and trophies and medals (or if not material prizes then better asking prices) at least for a little while. It’s not easy to admit, but very few of us are perfect horsemen.

Generally, however, I’m impressed with my fellow Makeover trainers. In the closed Facebook trainer group, I’ve e-met some of the best horsemen and horsewomen that I can’t wait to meet in person, a group of people who truly put the horses first and work hard to be the best possible bridge from track to second career. These people are passionate about the Makeover and the mission of the Retired Racehorse Project not because they want to win a piece of all that prize money and one of those fancy ribbons, but because, as I’m gathering, it’s an incredible multi-day celebration of the off-track Thoroughbred, and even if all your horse is capable of doing is walking around the arena, it’s meaningful just to participate. 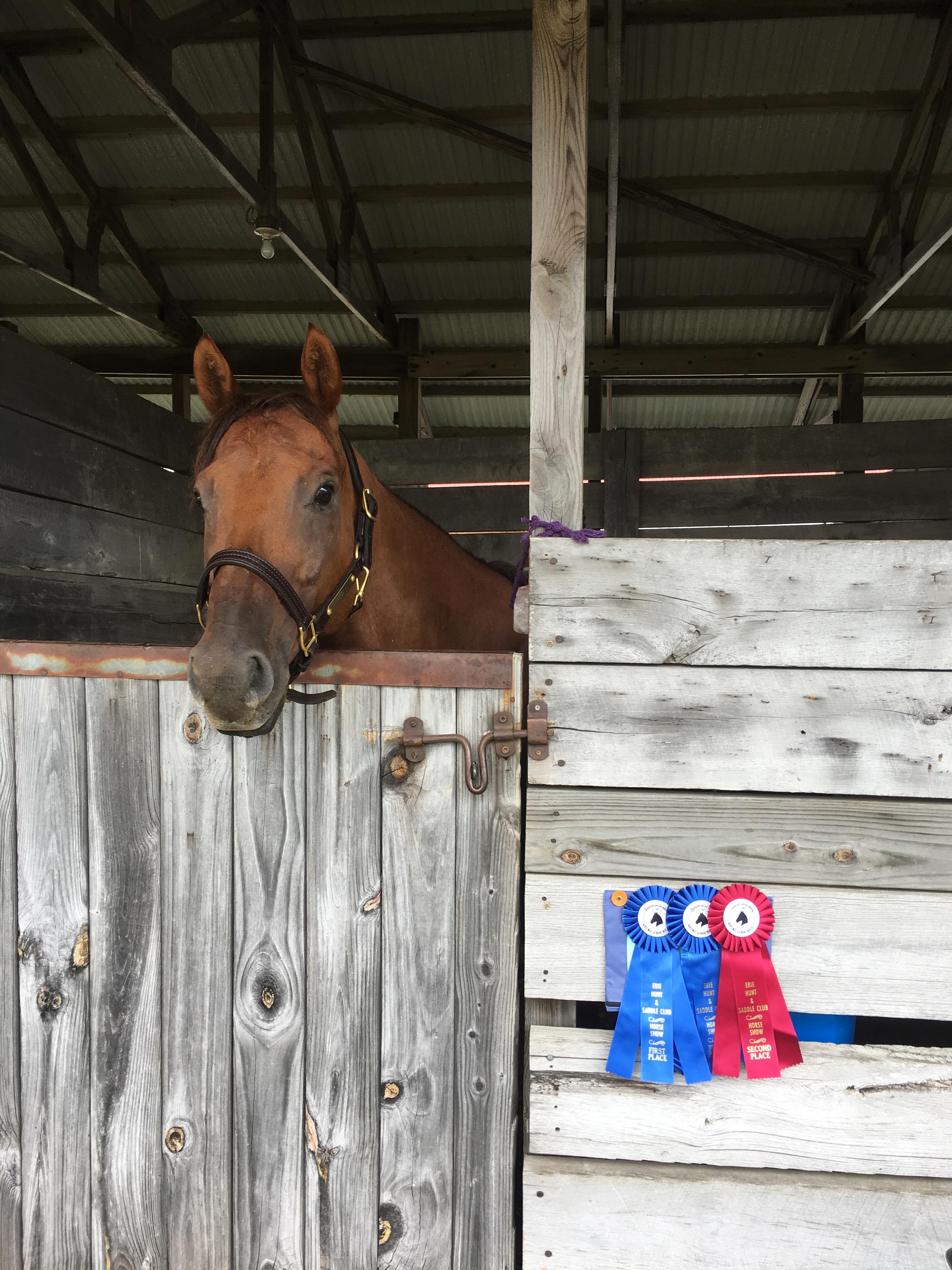 Those ribbons DO look nice though. Photo by Kristen Kovatch

So what exactly did I do to poor Jobber? Once we ironed out the early kinks in our trust relationship over the winter, and got a gentle but firm reminder from my patient trainer Nancy on what actual contact looks and feels like, I feel like we’ve come leaps and bounds. We now mostly-reliably have both leads of a balanced canter, a lovely ground-covering trot and the first steps of good lateral work, plus all the other bells and whistles that come with ranch life: working gates, natural trail obstacles, the basics of moving cattle, hill work and more. Our monthly (sometimes twice a month) lessons with Nancy have given me a new set of tools and exercises to build on what we’ve done before, allowing me to bring Jobber along in a logical progression.

Jobber was learning so quickly and so well that I let my own weekly schedule slide: I had been mixing flatwork sessions with cattle work, hill walks and trail rides to keep my little horse mentally and physically fresh. As we began making bigger and bigger steps forward, however, I started getting greedy, focusing more time on flatwork, veering into that danger zone of drilling. Losing a shoe and having a forced week off didn’t help my mentality at all, especially as the 90-days-until-the-Makeover deadline rolled by.

And finally Jobber spoke up, coming out the morning after our most recent lesson up-headed, hollow and anticipatory. I quickly tossed out the exercises we had learned the day prior (leg yields at the lope, counter-bend circles and a move-stop-turn exercise on the fence) and tried to work on getting my horse back. The next day, rather than let him just unwind in a trail ride, I decided to try again. And again the next day. In a chicken-and-the-egg scenario, Jobber developed just a tiny hint of back soreness, a small flinch as the brush passed over his spine. (This has since resolved with some ideas from my vet/chiropractor whom I panic-called.)

I wanted to show in the last weekend of July — Jobber needed the overnight experience at a show grounds. The week before the show, I tried to back way off, working in just two brief sessions of flatwork and transitions, mixing in plenty of ambling walks around the farm and some keep-away with our long-suffering cattle. 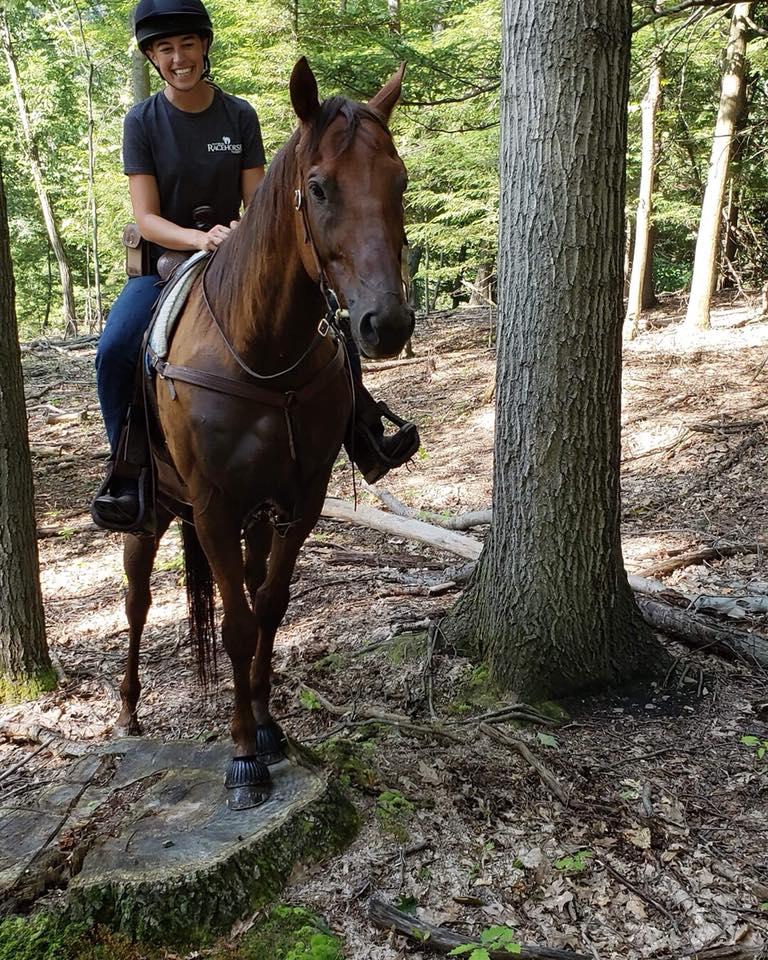 Jobber standing on a stump. #valuablelifeskills. Photo by Nancy Kohler-Cunningham

Our plan for the show was maybe a little more complicated than it needed to be, but it wound up working perfectly: I hauled Jobber first to the gorgeous farm where Nancy kept her horse, an Irish sport draught appropriately named Gandalf, and we saddled up and hit the trails. Jobber soon settled in, striding right along with Gandy who towered over him in dappled hairy majesty, and we wandered around the edges of hundreds of acres of farm fields, waded the geldings into a deep creek (which Jobber did not love but gave it a good shot) and goofed around over some downed timber. 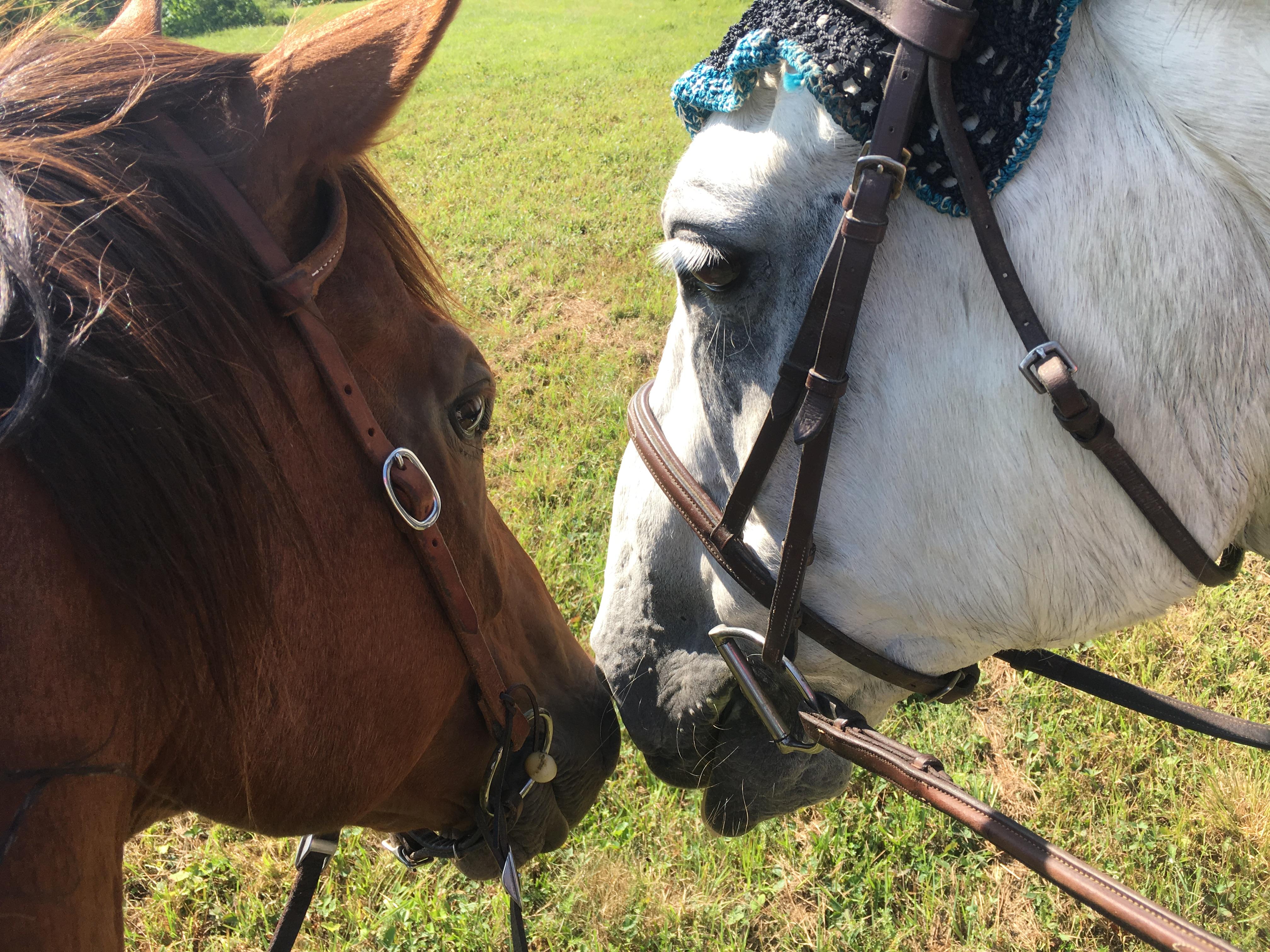 After that, we packed Jobber back up and hauled him to the small local show grounds to tuck him into his overnight stall. None of his direct neighbors had arrived yet — just those in the next barn over — so poor Jobbes was all alone in his shedrow, but he seemed not to mind, tucking into his hay and drinking plenty of water.

On show morning, there was plenty of excitement as day-showers arrived, trailers rolling up in front of the barn like clockwork to deposit ponies and horses of all shapes and colors. Open shows are really like a box of chocolates for green horses: they get to see ponies, horses, western, English, a little jumping, a little trail, some gamers and who knows what all else in the middle. Jobber observed quietly. 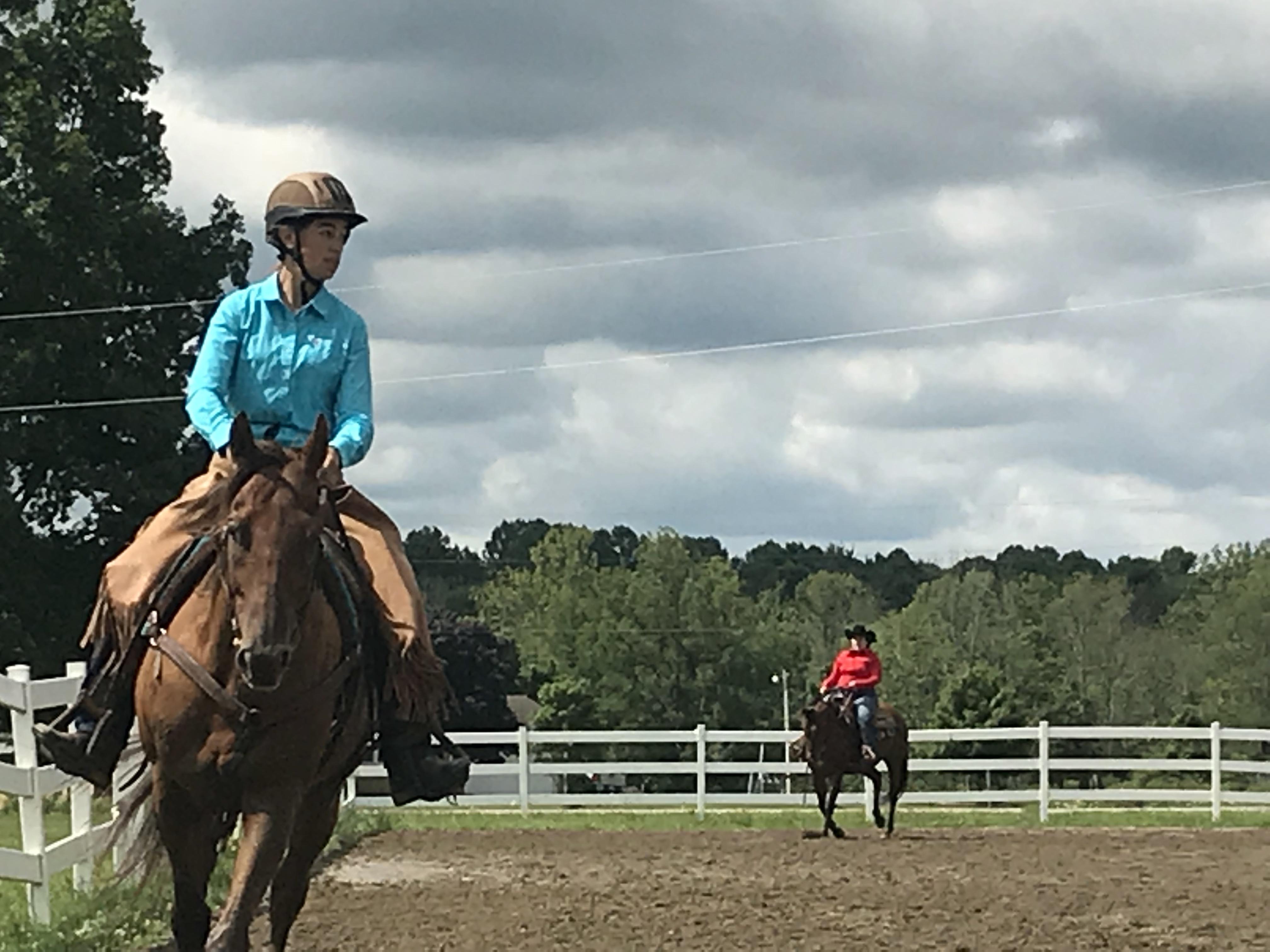 Careening around the show ring but having a good time. Photo by Erik Bentley

In the show ring, he was green but willing; out of the show ring, he was a total champion. First the in-gate crew, then my fellow competitors, then observers on the rail came over to ask about Jobber. I was happy to detail that yes, in fact, he was an off-track Thoroughbred, and this was his first overnight show, and I was planning to continue his training in ranch riding and reined cowhorse, and yes, Thoroughbreds could really succeed at western events. At one point, Jobber had two young kids petting his face, which he kindly lowered to their level, while a grandmother snapped photos and the in-gate volunteer marveled at his general demeanor.

The ribbons were a nice bonus — I always return mine to the show office at the end of the day after snapping a photo to commemorate our achievements. But the biggest prize for me was to realize just what a fantastic horse I had to work with, what a great ambassador to his heritage as a racehorse and a demonstration of the breed’s versatility. My heart (and truthfully my eyes) were full at the conclusion of our last class, the open trail, during which I heard a fellow competitor say to her husband, “look at that horse over there — that’s an ex-racehorse. I want to get one next.”

I’m sure I will make more mistakes with Jobber, no matter how hard I try to avoid doing so. I’ll lose my way from time to time as I work towards that ultimate goal. The Makeover is indeed a step of that journey, but just one step on that long road that I hope to travel with this horse of a lifetime. All I can try to do is be the kind of horseman that deserves a horse like this. I certainly owe that to Jobber.

Follow Jobber Bill’s ranch horse adventure at his Facebook page as we prepare for the Retired Racehorse Project’s Thoroughbred Makeover — and life beyond! 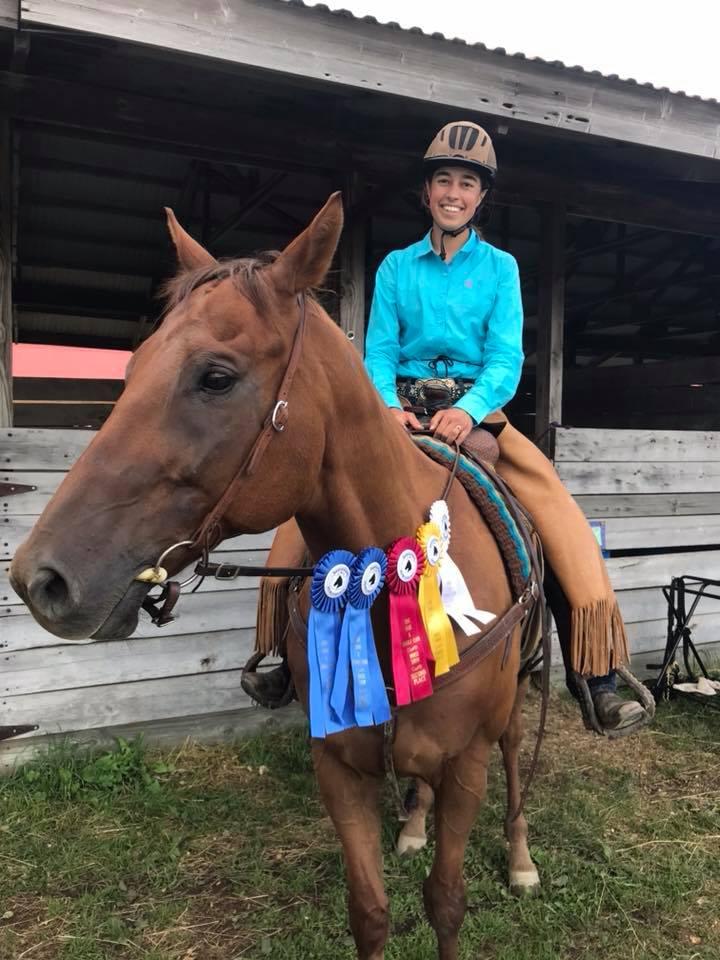