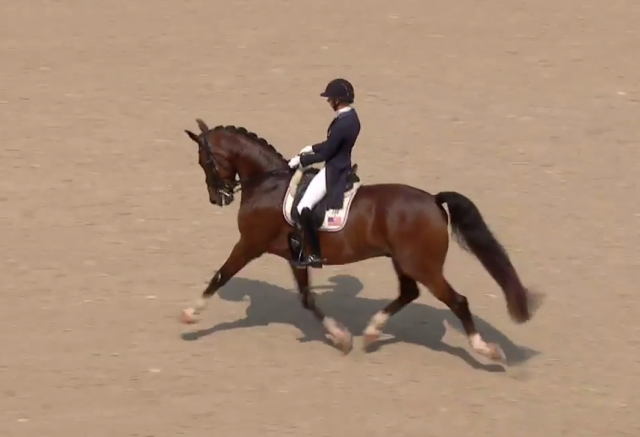 Laura Graves and Verdades put on their dancing shoes last week in Aachen for the FEI Nations Cup Dressage, winning the opening Grand Prix with a score of 80.606%!

If you’re the kind of equestrian who does everything themselves — train their own horse, do their own braiding at shows, muck their own stall and so on — you might look at the perfectly-presented riders representing our country on the international stage and think there’s no way that a self-made rider can ever get there. And in the case of Laura Graves and Verdades, you’d be totally, 100% wrong.

Graves did all of the work with Verdades, aka “Diddy,” herself — she’s owned him since he was a yearling, and he is as much her pet and companion as her competition horse. While she’s working with the best trainers in the country as part of Team USA dressage, she still does a lot of the work herself — including, at last report, her own braiding and bathing and hand-walking.

And this self-made team has gone to the biggest stages of the world, not only holding their own but winning as well. Watch Graves and Diddy dance in the Grand Prix in last week’s FEI Nations Cup in Aachen, Germany — a performance that initially put Graves in the lead individually and placed the USA at the top.

In their first class since the FEI World Cup Finals in Paris, Laura Graves and Verdades shined, scoring an 80,606% to win the CDIO5* Grand Prix at CHIO Aachen taking The Dutta Corporation #USAdressage Team into the lead of the FEI Dressage Nations Cup Germany. ?? Video via ClipMyHorse.TV Deutschland▶️watch.clipmyhorse.tv/CHIOAachen_Dressur

Self-made equestrians: never give up and never stop dreaming.