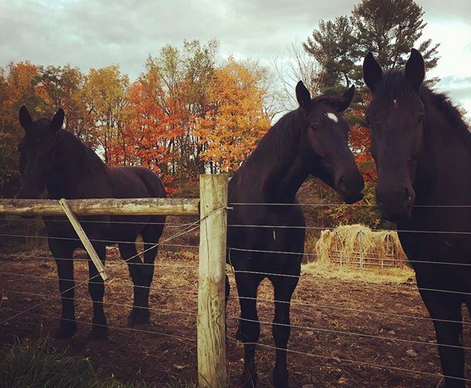 Sometimes, despite horses’ tendency to self-destruct in epic and expensive fashion, we equestrians totally get a free pass. Here are seven examples.

Horses, given their natural propensity for total self-destruction in epic and expensive fashions, occasionally give us a free pass — those little moments where you step back and think how on earth did this not just blow up in my face. In these moments, my friends, we celebrate dodging another equestrian bullet. Here are a few recent such moments in my memory.

1. Horse loses bell boot, but shoe is still there.

Lady Luck, you were with me for this one: my OTTB Jobber really enjoys pulling off his shoes due to what I’ll nicely call natural athleticism but could also less optimistically call some sort of diabolical need to rack up time off and extra farrier visits (and therefore $$$). Adding rubber bell boots to be worn out in the pasture has helped significantly, especially when I look at what a beating those boots take instead of the shoes. One day I caught Jobber to discover that he had destroyed a boot to the point where it was no longer even present… but mercifully, the shoe remained.

2. Horse loses shoe with clips and nails, but you find the shoe.

Okay, so sometimes the shoes DO come off — but it’s a great day when you can find it again! Not only because you might be able to have the same shoe reset and not have to pay for another one, but more importantly, so you don’t find the nails and clip embedding that shoe into the hoof or flank of your horse due to some really, truly, terrible luck. It’s worth the time to go look for those shoes. Here’s to hoping you always find them again.

3. Someone leaves the gate wide open… but the horses are still hanging out where they should be.

This year, we are leasing part of the farm to a gravel mining operation. The mining crew are all great guys; some of them have livestock experience which is an added bonus, even though if everything goes according to plan they should never have any opportunity to have to interact with the cattle, goats, pigs and horses. That said, there was one memorable incident early this spring in which I was overnight-grazing the horses in a pasture right on the road, believing that if I got to the barn by 6:45, I could bring them all in before the gravel trucks had to drive through for their workday that started at 7:30. Surprise! They started at 6:30 that week, and not seeing the horses in the pre-dawn darkness, they left the gates wide open so they could come and go as they needed to. I leapt out of my car with my hands literally shaking, only to find all of my dunderheads standing there staring at the open gate, still within their pasture.

4. Horse gets loose and runs into an empty paddock or stall and essentially catches himself.

We’ve all been there. This is awesome when it happens.

5. You fall off and land on your feet.

This is basically a rite of passage and I have nothing left to say about this. Go us.

6. Horse gets face totally stuck to something arbitrary and doesn’t panic.

On one of my first-ever appointments with my farrier, my former saddle horse Red performed this memorable trick in which he leaned his head down to the ground while Ed had a foot in the air. Having worked with plenty of horses who used their head as a counter-balance and kind of “fifth leg” during farrier visits, I let him stretch down… and wouldn’t you know it, he managed to hook his halter on the hoof stand and proceeded to gently raise his head as Ed set his hoof down. With reflexes like a ninja, I snatched the hoof stand and managed to get it unhooked about a second before Red had a total meltdown. Ed has been impressed with my reaction time ever since. (Lesson learned: make sure the “fifth leg” area is clear of objects before allowing horse to stretch.)

7. Horse’s stall door gets ripped off its hinges and horse stands there quietly waiting for someone to come fix things.

On a memorable day when I worked at the university, with some details still quite shady, a sliding stall door was somehow rolled over and closed on top of a cross-tie hanging in the aisle, and the horse on said cross-ties turned his head and subsequently yanked the door off of its roller to bring it crashing to the floor, triggering an (understandable) giant meltdown. Fortunately, this horse suffered only superficial injuries during his subsequent freakout, and the horse that was in the stall that was now sans door simply peeked her head out into the aisle, wondering when someone was going to come by and repair her house.

What would you add to the list, Horse Nation? Let us know in the comments section — and go riding!