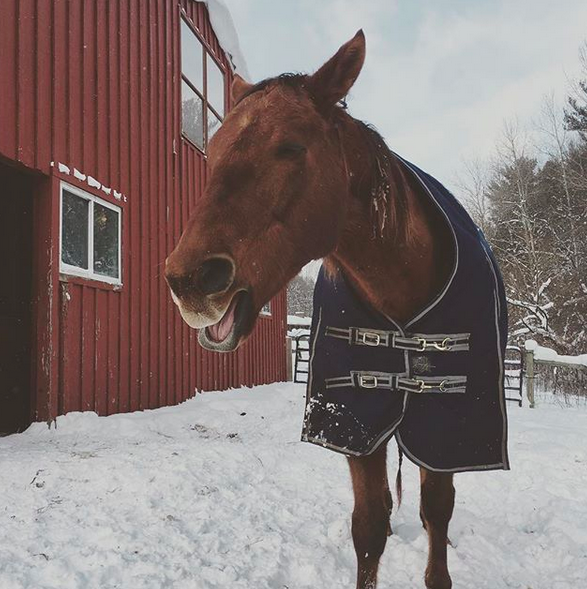 I mean, I guess they’re only horses, after all.

Horses do a lot of stupid things. A good number of those things might actually be indicators of bigger health problems (your horse who likes to lick dirt or his sweaty friend may be deficient in salt and minerals, as an example… even though he looks really stupid and you laugh at him anyway). But those bigger indicators aside, there are plenty of other things that are just… stupid. Here are my top three, as actually witnessed in person:

1. Rolling right next to the hay feeder and, yep, getting cast.

My husband’s saddle horse Dutch was a round, stocky individual with a sensible Roman nose and a great appreciation for creature comforts. Much to the chagrin of the farm staff, Dutch enjoyed pulling hay out of the feeder and placing it on the ground to make himself a bed/prime rolling spot, especially on sunny winter days when an afternoon nap was really calling his name. I happened to look out the barn door in time to see Dutch plop down on his hay pillow and really dig in for a good backscratch, which he slightly overshot due to his general level of obesity and rolled himself all the way over.

Stuck like a bug with his legs crunched up against the feeder, Dutch lay still for a moment, as though assessing the situation (and I have no doubt that he was) before attempting to wriggle himself free. With visions of all four of his legs snapping off in the feeder, I rushed out of the barn to his side to settle him while dialing down to the farm office with my other hand, requesting assistance from the stockroom guys under the assumption that we’d have to find a way to roll him over ourselves.

While on the phone, my big Belgian gelding Randy started ambling over, and I could see the wheels turning in his head. Just in time, I flung myself to the side as Randy moved in, ears pinned and teeth bared, biting down on Dutch’s chunky rump hard. The bite was enough for Dutch to push himself off the ground in one fluid motion and waddle away, leaving Randy standing happily in the sunshine. The move was practiced enough between the two of them that I didn’t want to try to fathom how many times Randy had come to Dutch’s rescue before…

2. Stepping on one’s own feed pan.

My other Belgian Rocky is a bit of a slow eater, so he’s constantly getting gang-rushed by the lighter stock horses while he’s working on his grain. It looks sort of like when a flock of starlings all gang up on a hawk, picking at him one at a time despite the fact that the hawk is way bigger and could rip their little wings off if he so desired — the Quarter horses peck and peck at Rocky until he finally gets mad enough to snake his giant draft horse head at them, sending them scattering.

Unfortunately, Rocky is a bit clumsy and slightly uncoordinated, so in this particular instance, he pinned his ears, threw his head at a Quarter horse who had come too close, and in the same motion stomped forward with one massive foot, catching the very edge of his feed pan and flinging his grain all over the place. The stock horses descended on this unanticipated windfall gleefully while Rocky tried his best to mop up the remains.

My new OTTB. Jobber is mostly vice-free, but in the winter when the herd is in a sacrifice dry lot on just hay, he will occasionally crib right after he eats his grain. He’s been treated for ulcers, gets plenty of hay and is also on a gastric supplement — I’ve just accepted this as a minor gross habit that wraps up after about five minutes of now-and-then cribbing as he digests. (In the summer, now that he’s on pasture, the habit has gone away completely.)

He did manage to cure himself of the cribbing issue for a few weeks this past winter, however… after he mistakenly chomped down not on the sturdy wooden fencepost he thought he was aiming for in the dark, but the hotline on the electric fence. I happened to be standing next to him at the time and heard the tremendous SNAP of the electric as Jobber whirled away, a shadow darker than the falling night. He whickered in total shock and confusion, trying to figure out exactly why his beloved fencepost had betrayed him so. For about a week after that, he didn’t crib at all. Poor dude.

Oh, horses. We love you anyway.