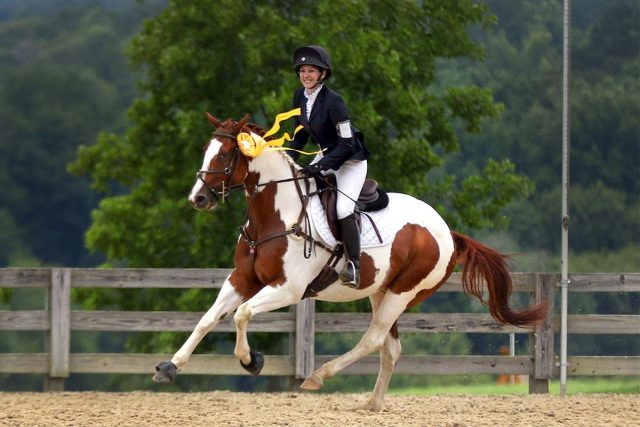 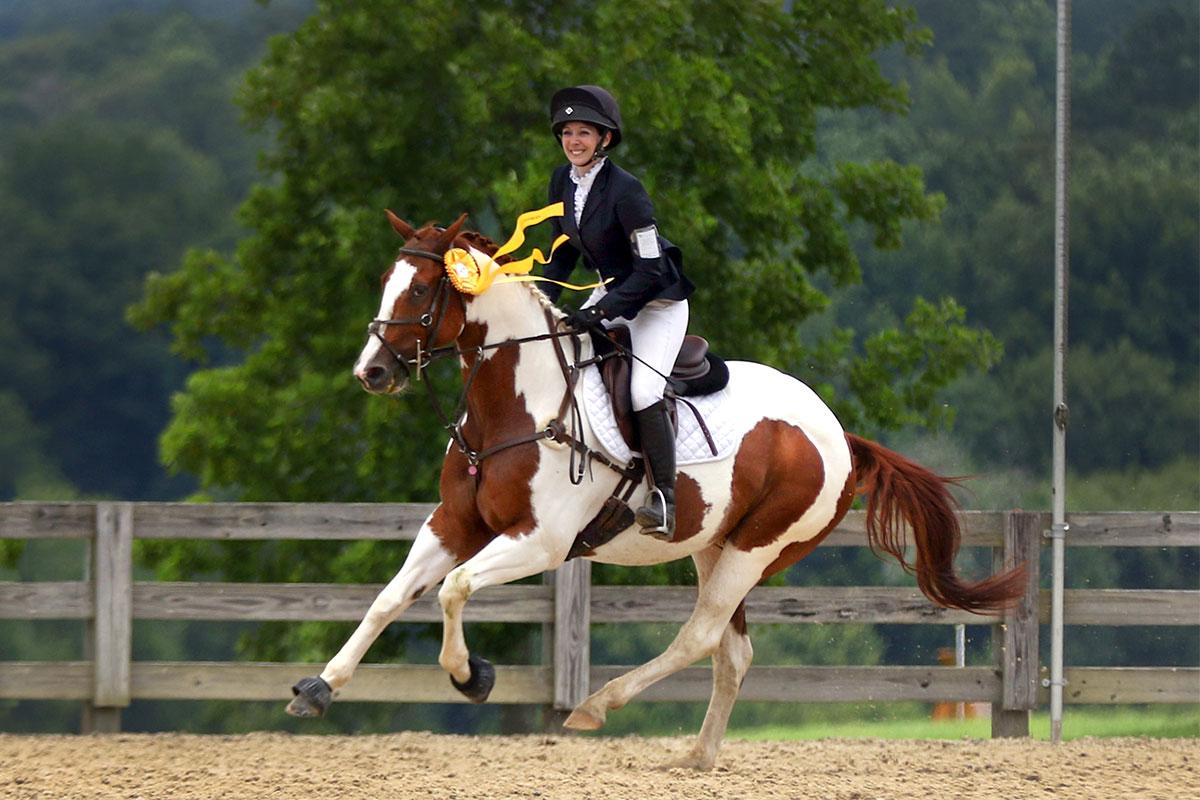 When we went to Florida in January of this year, JJ and I unintentionally qualified for the USEA Area III Championships. Since the event was hosted only an hour away from me in Georgia at Chattahoochee Hills, I decided we would go and compete in the Senior Beginner Novice Championship division, just for funsies.

Our last event was three months ago in March, and with only one small XC schooling session between now and then, I honestly wasn’t expecting much for this.

On Thursday, JJ and I hitched a ride to Chatt with our friends Doreen Durr and Meri Jane Sayre of Free Form Farm, got settled in, and went for an easy hack around the property to look at all the flappy flags and “scary” vendor tents. Somehow, out of the 300 horses at the event, we wound up stabled right next to one of my besties, Beth Clymer, and her fabulous OTTB, Andy! Small world!

To say it was hot on Friday would be an understatement. It was like the fiery infernos of hell, and JJ and I had scored a 3:50pm ride time – right at the peak of the day’s heat. I made sure we were hydrated before tacking up and heading off to sweat in style, and decided to keep our work as light as possible so as not to risk wearing either of us out. No joke, my only goal was not to pass out from heat exhaustion and fall off.

Warm up went well, and when we were called for our ride time, one of the ring stewards asked if I wanted her to hold my whip while I rode. I replied “nah, it’s fine, I can carry it” to which she responded that whips were actually illegal in the championship divisions – oops!! I had no idea, and she saved my butt so a big ol’ THANK YOU goes out to her!

We started our test fairly well, but I could tell JJ was already tired. Could I have pushed for more energy and connection? Yes, definitely. Did I? No, because I care more about keeping him happy and being fair to him than about winning, so I left a lot of points on the table.

Overall, it wasn’t a bad test. We had good relaxation and some really nice moments, although he tried to jig during both of the medium walks (“Can we hurry up and get this over with so we can go jump, please?”) and I was surprised to find out that we had actually scored a dismal 41.30 to wind up 7th – we haven’t been in the 40s since early 2016. Seriously. Wow. But, I wasn’t there to win – I was there just to enjoy the experience.

After, we went back to the barns and I gave JJ a bath, some cookies, and some grazing time before calling it a day. (Pro tip: don’t try and be nice and let your horse graze while you hose him down. You’ll wind up accidentally standing in ants and then you’ll be itchy all weekend long. Ask me how I know.)

I had walked the cross country course the day before, but again was ignorant of the championship division rules and didn’t realize the “options” that were set up weren’t really options at all… I wound up walking/planning for the easier lines since they weren’t yet marked with the “CH” designation. Thankfully, Beth clued me in that the harder lines were actually a part of my course, but by then it was too hot for me to want to go back out there and walk it again, so I just figured I would find the actual jumps as we came to ’em. Whatever.

We headed down to the warm up area and JJ had a lot of pep in his step. He knew what was about to happen, and he was READY. He had great energy over every fence we tackled, then got into “go” mode waaaaay too early. He was SO excited to get started that someone asked if he was a baby horse (no, he’s actually 15) and then someone else asked if I needed help getting him into the start box (I don’t – the problem is that he WANTS to be in the start box way too much). Freakin’ hilarious.

Eventually, the starter counted us down and JJ was off like a bullet. After jump 1, there was a big uphill stretch to fences 2 and 3, so I let him gallop and he was FAST! (After we finished, my husband asked “What the hell gear was that?! He was flying!!” haha) Just like the event in Florida where we qualified for this one, I knew nothing would stop him. All I had to do was hold on.

Honestly, it was a lot like riding a freight train. At full speed. On fire. JJ was SO pumped that I kinda didn’t have any steering or brakes – and at one point, he tried to run straight back to the start so we could “go again” while another pair was starting their course. I hope we didn’t distract you and Dawson, Ansley Benfield!!

Anyway, the only jump I was nervous about was #7, a brush jump. We had never jumped one before, and sometimes JJ can throw in an unexpected stop, so I rode as confidently as I could and he cleared it like it wasn’t even a thing. After that, we were home free. There wasn’t a single obstacle that concerned him, and despite two trot sections to get his brain back, we crossed the finish double clear and with almost 40 seconds to spare! 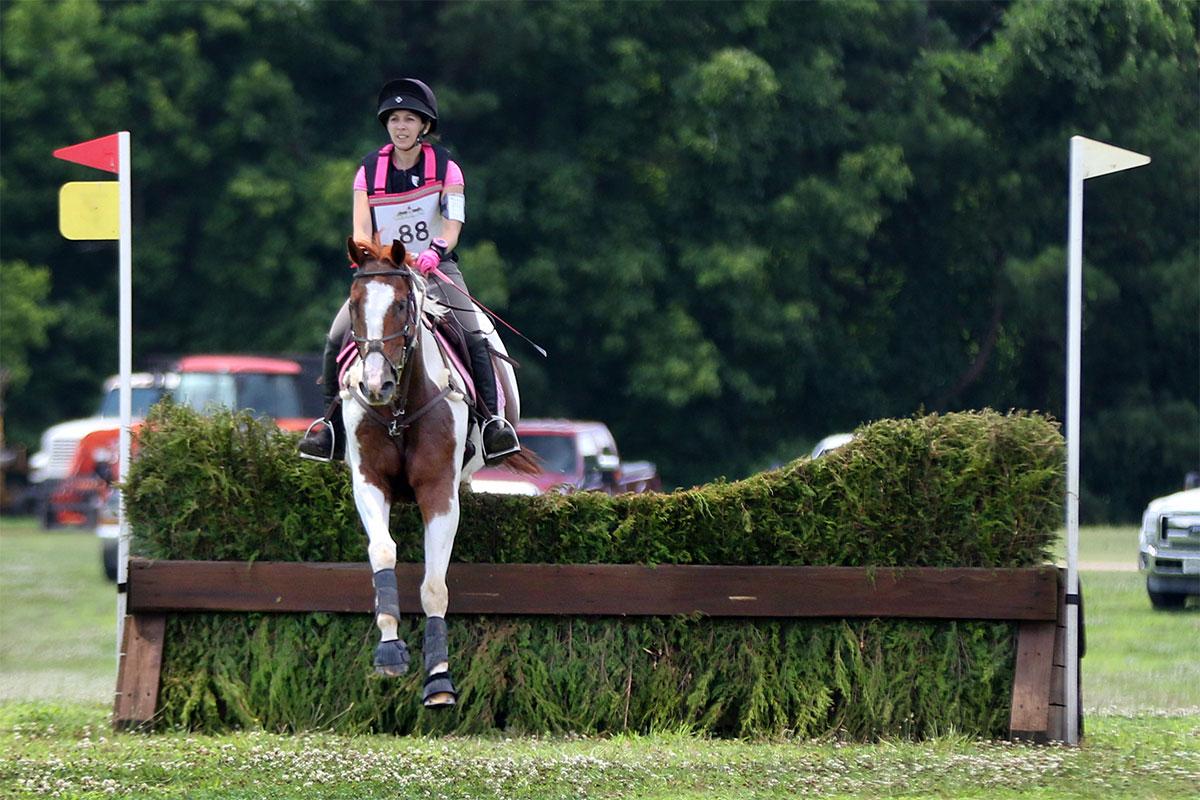 It’s little, but it’s legitimate – our first brush jump and it was FUN! Photo by Erik Jacobs / P.TEN Marketing

I had hoped the previous day’s shenanigans had tired JJ out enough so that he would actually be rideable for stadium jumping. I’m not sure if that’s actually what happened, but when we started working in warm-up, I was so thrilled to see that he had found his brain again and was back to normal. A few perfect warm-up fences later, and we were ready to tackle the course.

As usual, JJ put in a fabulous jump performance and didn’t knock a single rail. We had one little rub, but it stayed up, and he actually listened to my input about pace and direction this time! Another double clear round meant we were officially finished with the Area III Championships and ended on a number – woohoo!!

A few minutes later, the rest of the SBNR-CH division had gone and we walked back into the arena for the ribbon presentation ceremony. I had been in 5th going in and expected that’s where we had stayed, but when they started calling out names and places and we weren’t 5th or 4th, I was absolutely shocked.

Incredibly, we had moved up to 3rd of 12!! We proudly walked up to claim our beautiful yellow and gold ribbon, have our photo taken, and get ready for our first-ever victory gallop.

Poor JJ was NOT happy about having a big ribbon flapping around on his bridle and almost had a come apart when we started our canter with the group, but he tried his absolute best to be a good boy and dealt with it with minimal shenanigans. It was SO MUCH FUN and I was so proud of him for not only giving me three great rides, but for acting like a real event horse and not killing me during the weekend’s last moments.

Throughout the event, I kept running into friends and it made my heart happy. JJ’s biggest fan, Brit Randolph, came by to finally meet him in person (and to film a special “Will JJ Eat It?” episode). I spent time with Lindsay Barrack and my favorite MFers from Mahan Farm in Florida. I met a bunch of new people and made new friends. And I absolutely LOVED how many people recognized (and were excited to see) JJ all throughout the weekend. You guys are the absolute best.

My coach, Miriam Offermanns of Milym Equestrian, wasn’t able to attend the event since she is busy caring for her beautiful newborn daughter, Mila, so JJ and I (and our fellow team Milym rider, Catherine Shu and her horse, Copper) were on our own. Ironically, this event wound up being just like the one that I qualified for it with! I was alone then, too, and at both events I started out in 7th, moved up to 5th, and then finished in 3rd – it was like eventing déjà vu!