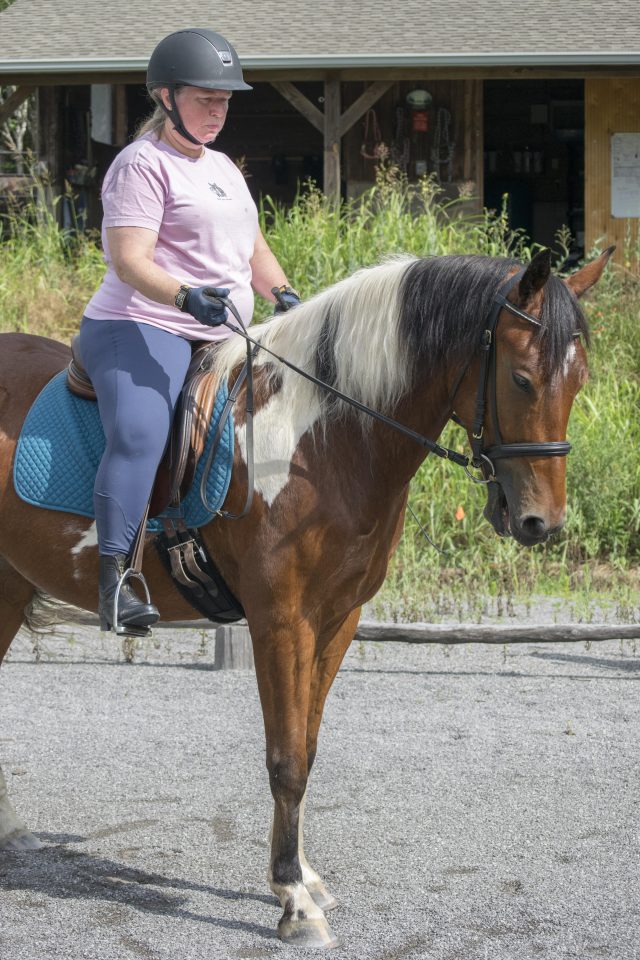 On the art of the half-halt.

For many not-skinny (yet!) riders, self-confidence is one of our primary obstacles. We look at ourselves in the mirror, compare ourselves to the models in the equestrian catalogs or the majority of riders at a show, and feel like we are utter failures in so many ways and especially at the sport of riding.

In the words of fellow equestrian and beloved M*A*S*H* character Colonel Sherman Potter:

The first fallacy of fluffy riders is “I cannot ride well.” There are several variations on this theme, including, “everyone will stare at me,” “I’m going to embarrass myself,” “there are no riding clothes in my size,” and on and on. The fear is what inhibits our skills, not the extra pounds.

So, faithful followers of Fat to Fit (and newcomers – welcome!), let’s take a break from food and fitness this week and talk about a riding skill that can seem as frustratingly elusive as my next benchmark on the scale:

In many respects, the half halt is the holy grail of communication between a rider and her horse. Executed correctly, the half halt can serve many purposes.

A well-executed half halt can ask your horse to refocus back to the job at hand and back to you as the rider. It can also refocus him off whatever caught his attention and remind him you’re there, you’re in charge, and he has no need to fear. It can prepare your horse for the “ask” portion of the next transition, either upwards or downwards. It can help your horse reframe and balance. It can help teach a horse to stand quietly. 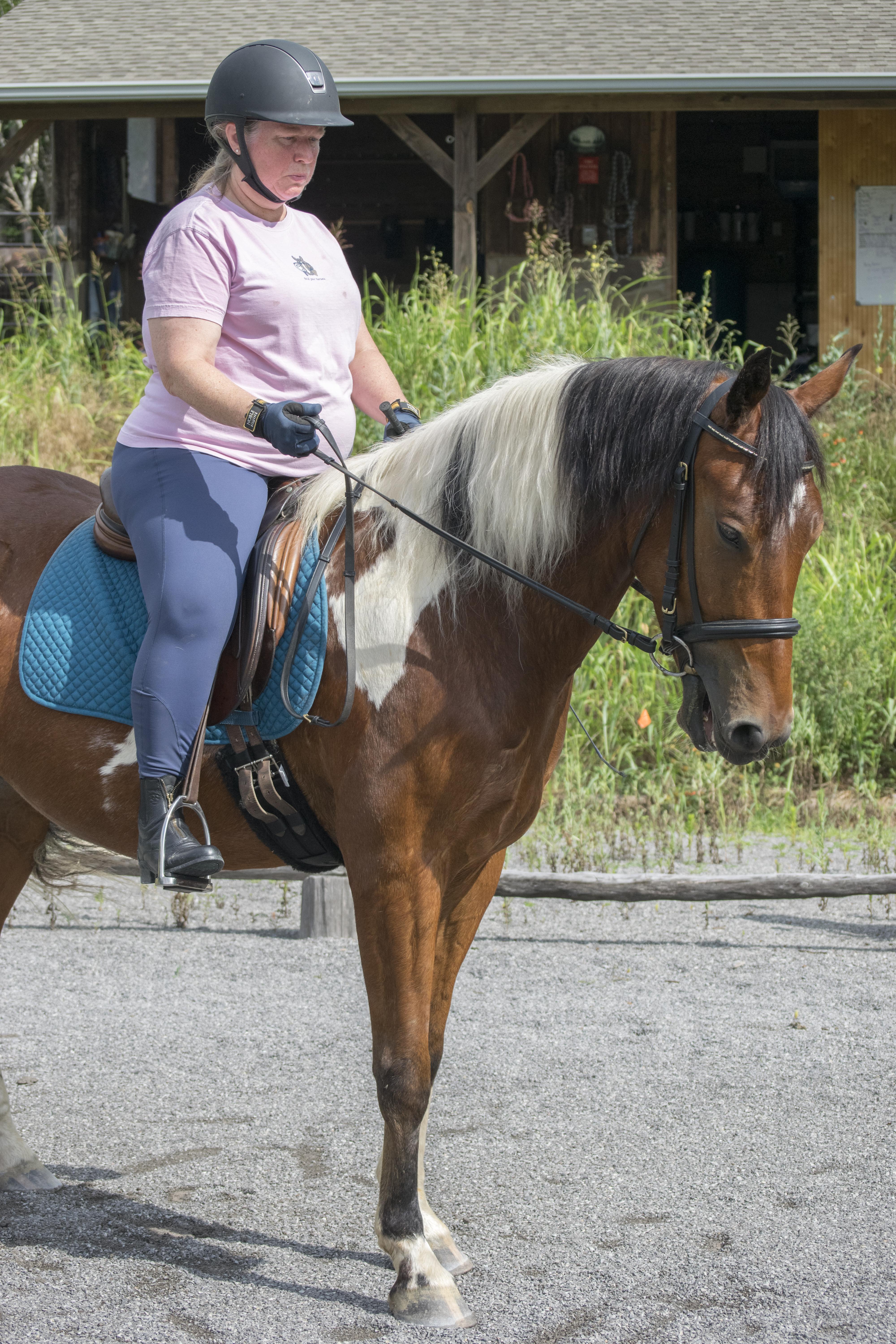 These are but a few of the many uses for the half-halt.

A well-executed half halt, like any other communication between rider and horse, begins in the rider’s mind. Assume, for a moment, that a successful ride – in any discipline – is the equivalent of a lovely string of pearls.

As you’ll notice in this photo of my own strands of pearls (‘cos it’s the South, friends, and that’s how we roll! #familyheirlooms), the knots are tied individually and with just the right amount of tension. Tie the knots too tightly, the pearls will not hang correctly. Tie the knots too loosely, the strand looks stressed and cheap. 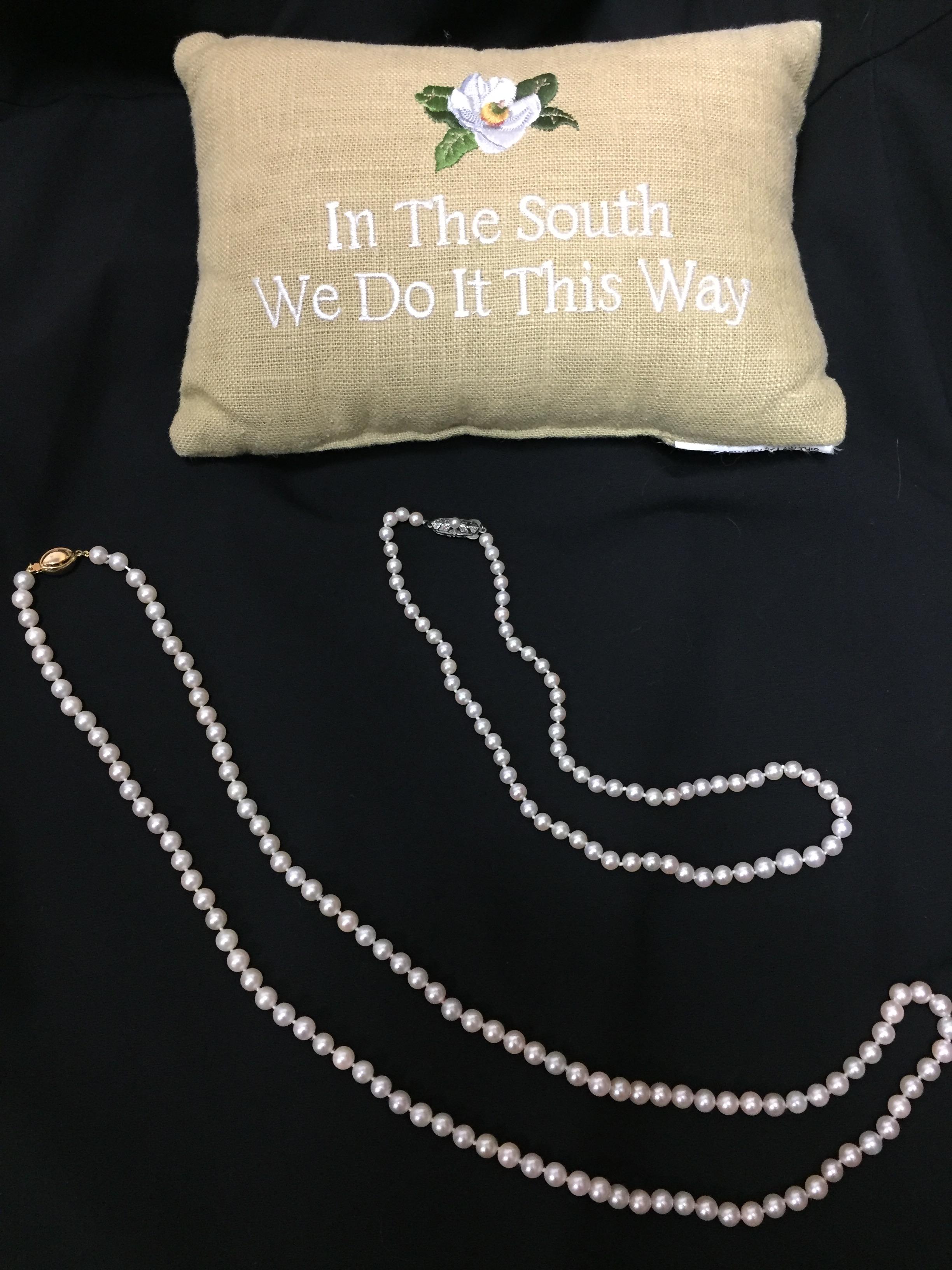 Note, too, that each knot is simply a redirection of the single silk thread that secures all the pearls together to make the whole strand.

It’s the very same with half-halts. They’re really not “half” anything, nor are they a “halt.” (It would be great if we renamed the entire movement; my fav name would be “hello” because, in essence, that’s all you’re doing is saying, “hello” or “focus on me” or “get ready, buddy” with your body, but I doubt the FEI world would ever take my suggestion to call this movement “hello” so we’re stuck with “half halt.”)

But! Here’s how it works – for riders, and horses, of every shape and size. You, the rider, are the brains of the riding herd of two. So you, the rider, will first notice that you need to communicate slightly with your horse – to get his attention, prepare him to bend, turn, change gaits, whatever. That’s what I mean by a half halt always starts in your mind.

Almost simultaneously but technically a split-second later, a part of your forearm should snug up the contact. I say “a part of your forearm” because half halts come in all sorts of intensities. A high intensity half halt would mean complete closure of your hand and firming up of the forearm muscles. The most delicate half halt is a nuanced closing of merely your rein finger and nothing more. The intensity of each and every half halt depends on the specific circumstances and what you’ll be asking for next from your horse. 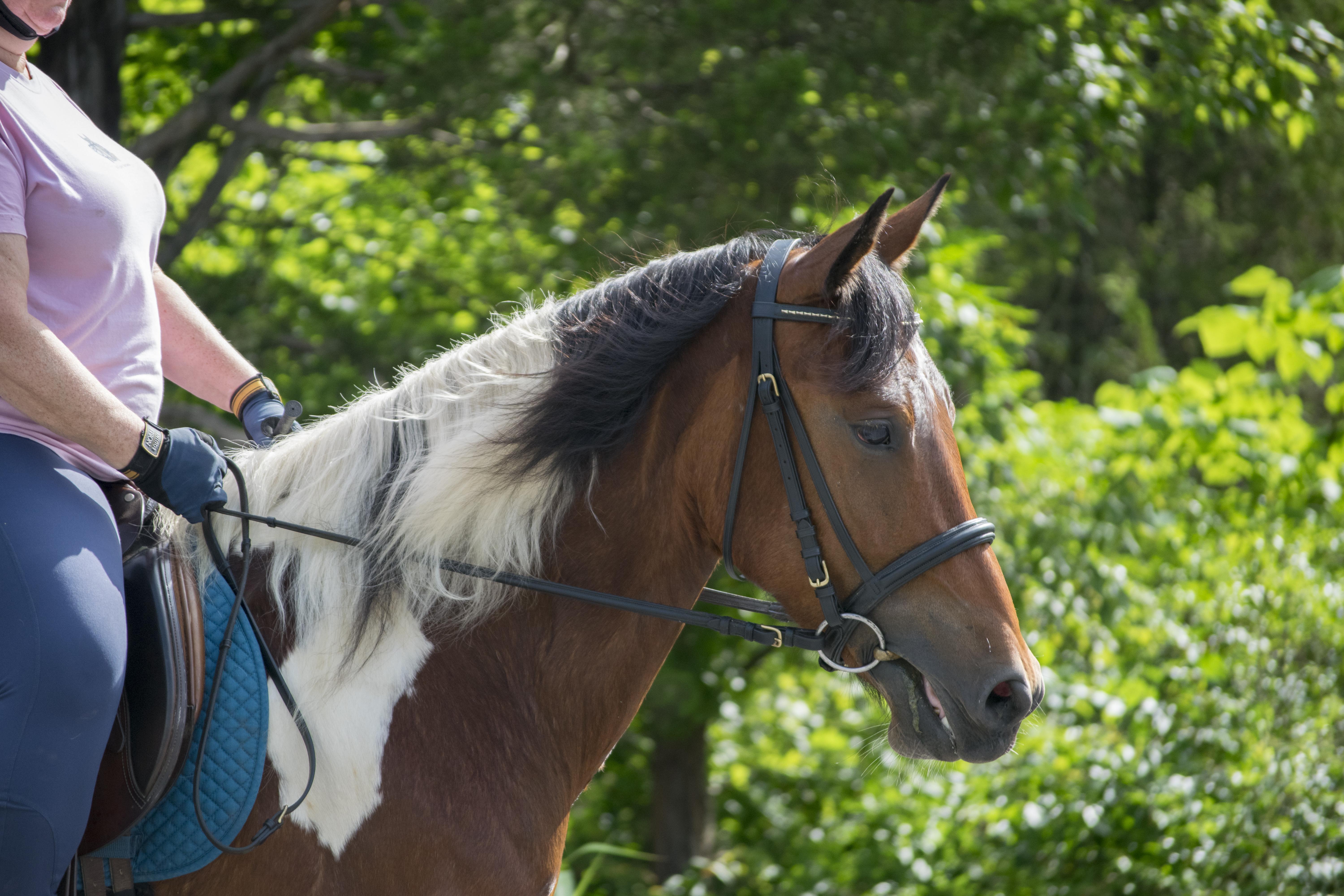 I’m deep in the saddle, leg on, I’ve gently closed my rein finger and slightly snugged up my forearm muscles to retain this half halt as Kaliwohi lightly chews the bit while maintaining the contact. Two points of critique: first, the line from mouth to elbow is aaalllmost unbroken, but my hand has dropped down out of plane just a little bit; second, Kaliwohi’s default head/neck position is “airborne giraffe” so I’d rather have his entire neck and head a bit lower and his back more engaged; however, overall the half-halt is executed very well and achieving steady, attentive contact is the main point. Photo by Tess McHone, Everyday Beauty Photography

Note: Simultaneously with the snug up, keep your legs doing whatever you need them to be doing – same pressure if you’re wanting the same gait, more drive if you need it, more inside leg to bend, outside leg to turn, whatever. What you don’t want to do in a half halt is snug up your hands while letting your legs become useless noodles. Legs do their thing even during the half halt, and, in reality, often the legs add a tad of drive because the horse sometimes “reads” the half halt’s snug up phase to mean, “slow down just a smidge.”

Most of the time, immediately after the “snug up the contact” comes a release of whatever pieces of your forearm/hand/fingers you just snugged up. (Think of the silk thread in our strand of pearls – the thread bends upon itself to make a physical knot and immediately straightens out to accept the next pearl to be included in the strand.) Executed correctly, a half halt is just as seamless as that silk thread turning upon itself to make the knot, and flow on…

The release is your horse’s reward for paying attention to the snug-up portion of the half halt. Remember that. 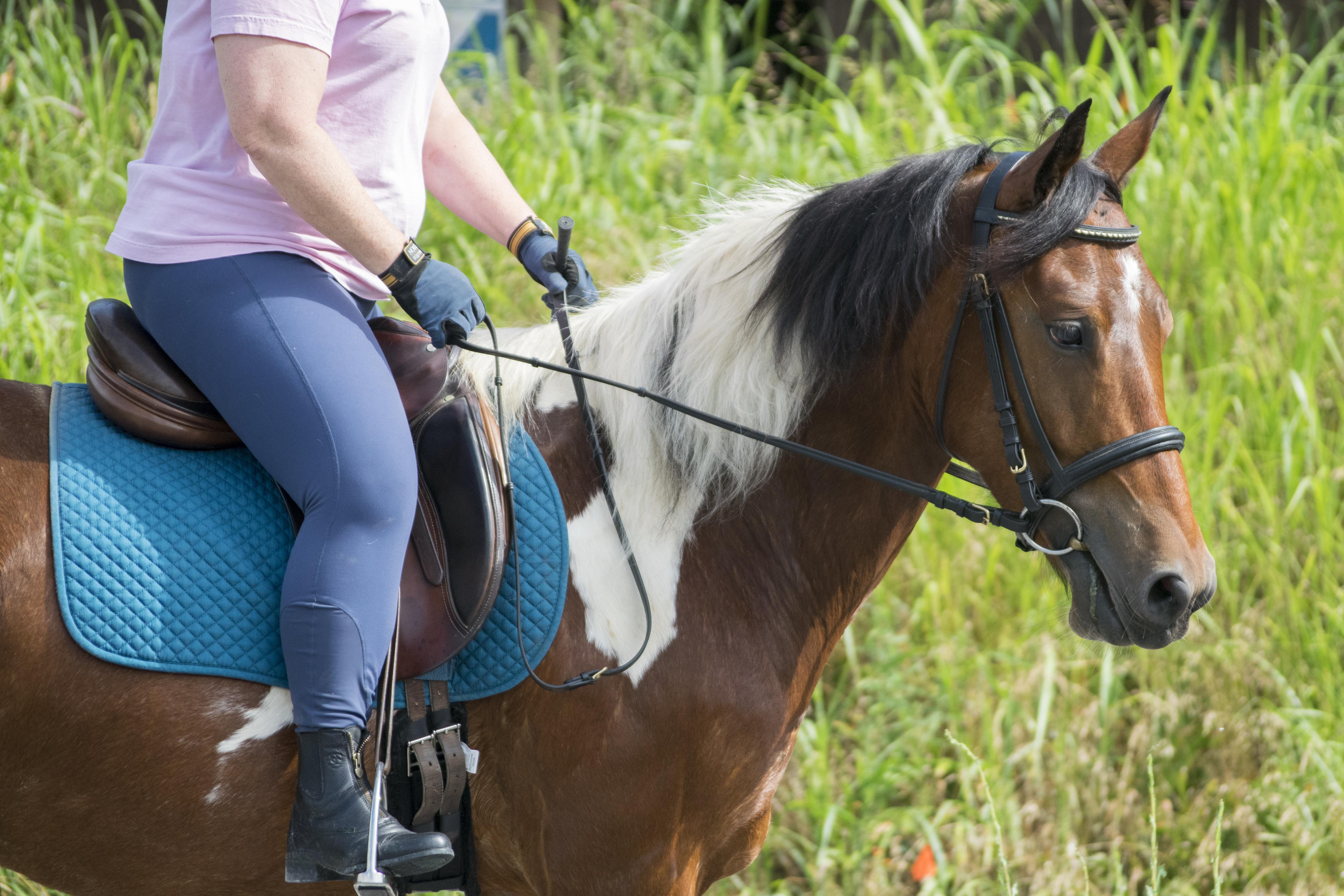 Note my release, as the ring finger has opened to allow the contact to soften for one stride. Note, too, while I’m in the “up” phrase of a posting trot, my leg is still on and keeping Kaliwohi driving forward. Photo by Tess McHone, Everyday Beauty Photography (Extra kudos to Tess for the amazingly well-timed shots to catch the various phases of the half halt!)

The release is your horse’s reward.

Therefore, most of the time, you want to immediately release and reward your horse. Like I said, just say “hello” and release.  Simple.

Here I’m using a prolonged half-halt to ask Kaliwohi to shift his weight more to his hindquarters and yield his poll at the halt, to prepare him for more collection in gaits. At the moment this photo was taken, Kaliwohi had just yielded and earned his release/reward, as evidenced by the slight slack in the rein. Photo by Tess McHone, Everyday Beauty Photography

So, friends, in essence, every half halt has four parts: 1. Mindfully realize you need to half halt; 2. Exhale through your seat bones; 3. Snug up your forearm as little as possible but sufficiently so as to get the response you seek; 4. Release.

Now review that last paragraph and realize there is nothing about a half halt that requires the rider to be size zero with zero cellulite. Nothing. Nada. Zilch. So give yourself permission to practice half halts and learn to ride them really, really well, for they are, in my opinion, one of the “top ten” keys to success in the saddle. Why? Because they provide nuanced communication with your riding partner, and those nuances work together, like the knots in an elegant pearl necklace, so you can enjoy a beautiful, continuous, balanced ride, stride after stride after stride.