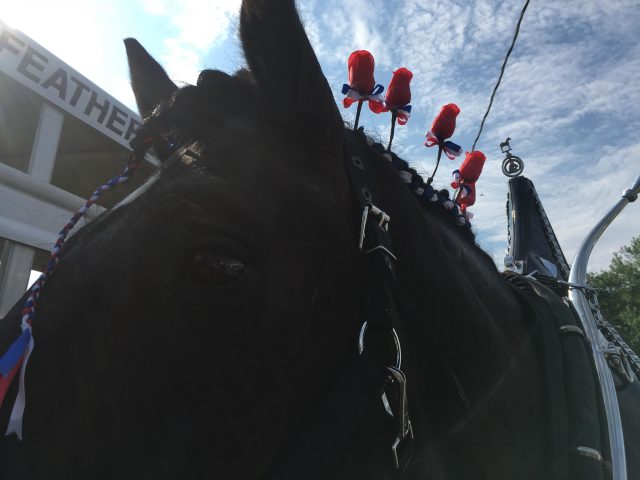 Participating the town Fourth of July parade is a rite of passage for any horseperson… and it’s certainly a unique experience.

My last parade experience had been an ill-fated Santa expedition in 2013: it was cold, it was dark, Santa was really mean and the parade coordinator was worse, we were swamped by shrieking children at the end of the route and for the second year in a row Santa just couldn’t keep his balance on the wagon and fell down in front of the crowd. Maybe he had been drinking.

So when the opportunity arose to drive one of my father-in-law’s Percherons in the single cart for the town’s Fourth of July parade, I was eager to give the concept of parades a second chance. It would be warm, my passenger would not be a mean Santa but the sweet mother-in-law of a local political candidate and it would be daytime with the shrieking children safely corralled on the sidewalk.

All of this was mostly true, but it was also, as they say, something else entirely. Here are some of my collected thoughts and musings. Anyone who has ever done a local Fourth parade will recognize these.

1. “The Fourth of July will always be the hottest day of the summer, somehow.”

It was something like 89 degrees with 89% humidity by 8:30 AM in direct sunlight when we were putting the finishing touches on decorations and getting hooked up at our friend’s barn to then wagon-train it down the hill to the village center to form up. I’m fairly certain there’s a big gross sweat stain on the cart bench where I was sitting. I take back everything I said about miserable wintertime parades.

2. “Is the helicopter ABSOLUTELY necessary?” 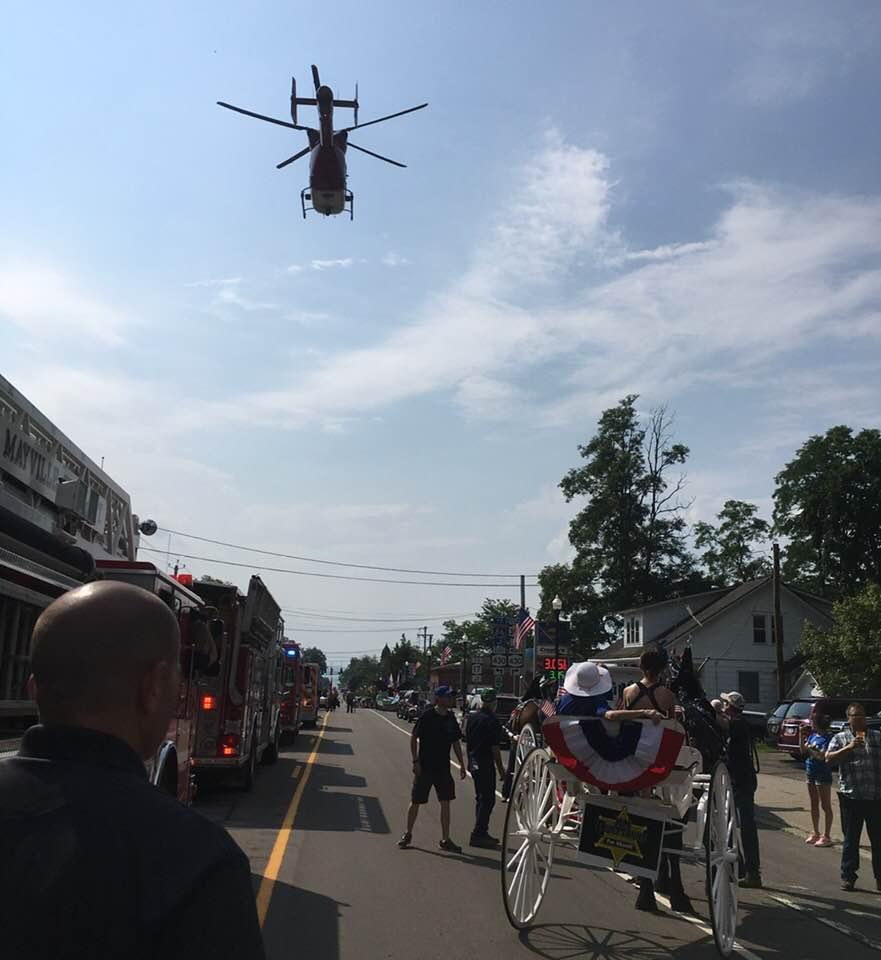 And away she goes. Photo by Kim Bentley

Apparently, this village parade kicks off with a route fly-over by Starlight, our medical-evac chopper, which is charming and all except that they do that fly-over at like THE bare minimum height required to not collide with the courthouse tower. So that’s exciting when you’re at the lines of a horse who’s never done a parade before.

Holding the head of the horse was my husband on the ground, who told me the story of how Starflight used to be a Huey and about eight times as loud and how when he was 11 the Huey did a parade fly-over and the horse he was riding tried to sit down on a guardrail and flip over on top of him. Every other family member repeated this story to me all day long at various Fourth of July gatherings. The moral: no matter how terrified I may have been at the time, obviously someone somewhere has always experienced worse.

Turn up your volume to experience the joys of chopper fly-overs: our Percheron Randy did really well, as did the Belgian team belonging to our friends. Many thanks to my driving student Chloe for the video, complete with her cameo “good…yeah!”

It ain't the Fourth of July until you get buzzed by Starflight (turn your volume up). Considering this is Randy's first parade and third time going single, he did pretty well, all things considered.Video by Chloe Petry.

3. “IS THAT CAPTAIN AMERICA ON A HOVERBOARD?”

4. “This is actually one of the weirdest things we could ever ask a horse to do.” 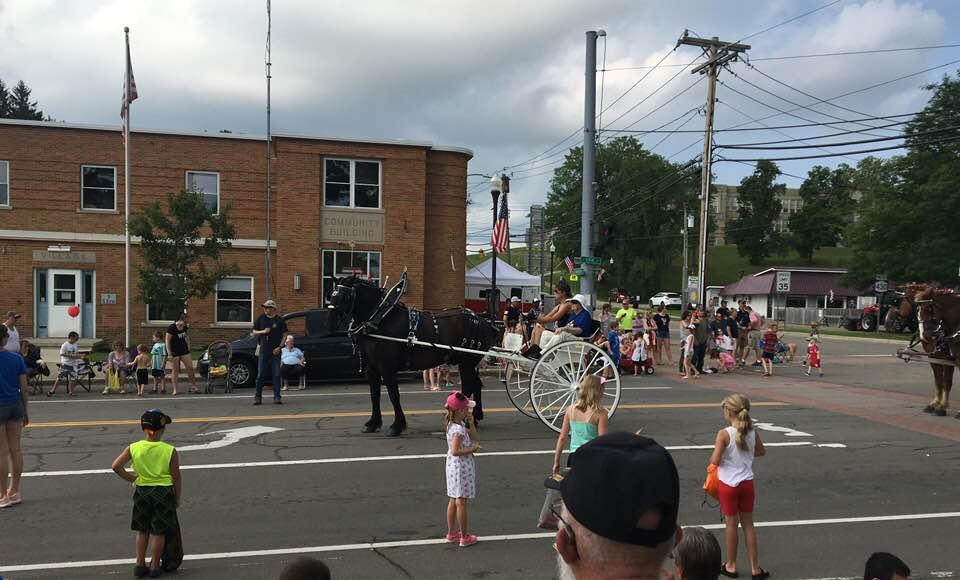 At the actual start of the parade route. Photo by Kim Bentley

Once the parade finally got rolling, it of course moved at the speed of people walking slowly — somewhere in front of us was a small marching band, a dance troupe that continually stopped and performed brief numbers which stopped the entire line, and a posse of road cyclists from the local shop that were forced to slowly circle their float so they didn’t lose their balance and tip over — plus the usual collection of antique cars, large equipment covered in patriotic paraphernalia and the aforementioned Captains America on their hoverboards. Randy was forced to walk at a crawling pace, which was incredibly frustrating, but being a good-natured fellow he adjusted within a few blocks and got used to stopping, standing, taking eight or nine baby steps and stopping and standing again.

Friends of ours were driving their Clydesdale mare in a single cart ahead of us, and were well-armed with a big bucket of candy that they were throwing to the gathered crowd (the same was true for the wagon drawn by the Belgian team behind us). This made our wagon train very popular with parade-goers, but also meant that small children were literally darting out into the road to grab bubblegum and mints while we were rolling by. Fortunately, about 90% of the parents were responsible enough to say “not in front of the horses, sweetie!” but there were definitely others who were cheering their kids on. While I find that amount of faith in my ability as a driver and my horse’s saintliness to be respectable, please people, do NOT tell your kids to run around beneath wagon wheels for the sake of a 10-cent sweet. My blood pressure is finally getting back down to a manageable level.

I chose to carry a driving whip for the parade — again, it was Randy’s first parade ever, and I felt safer having one more tool at my disposal to use to help keep him straight and focused. I don’t whip my driving horses — the whip is simply an extension of my arm, and I use it to tap a hip or a shoulder that’s coming out of line and needs a little extra guidance to stay on track. Most of the time, the whip was upright in my hand.

Naturally, I happened to need to tap Randy on the hip in front of a six-year-old self-proclaimed animal rights evangelist, and while I’m sure his heart was in the right place and I appreciate his mentality, this child screeching “NO WHIPPING, THAT’S ANIMAL ABUSE” certainly did not put the equestrian portion of the parade in a particularly good light. Thanks, kid.

7. “No parade would be complete without a giant thunderstorm, of course.”

Just as we were rounding the turn off of the main drag and onto the side street at the conclusion of the route, an ominous rumble came from overhead, and our wagon train double-timed it back through the village and up to the farm to get under shelter as soon as possible. We must have been particularly blessed, because we somehow managed to get all the way back to the farm, get the horses unharnessed, the carts under cover and our horse back on the trailer; on the pass back through town after the parade wrapped up we noticed that the streets were soaked. I’ll take it.

Sticky heat, threats of thunder, small children flinging themselves under your horse’s hooves and low-flying helicopters: these are the things that make the United States great. Happy day-after-the-Fourth-of-July, Horse Nation. Go riding! 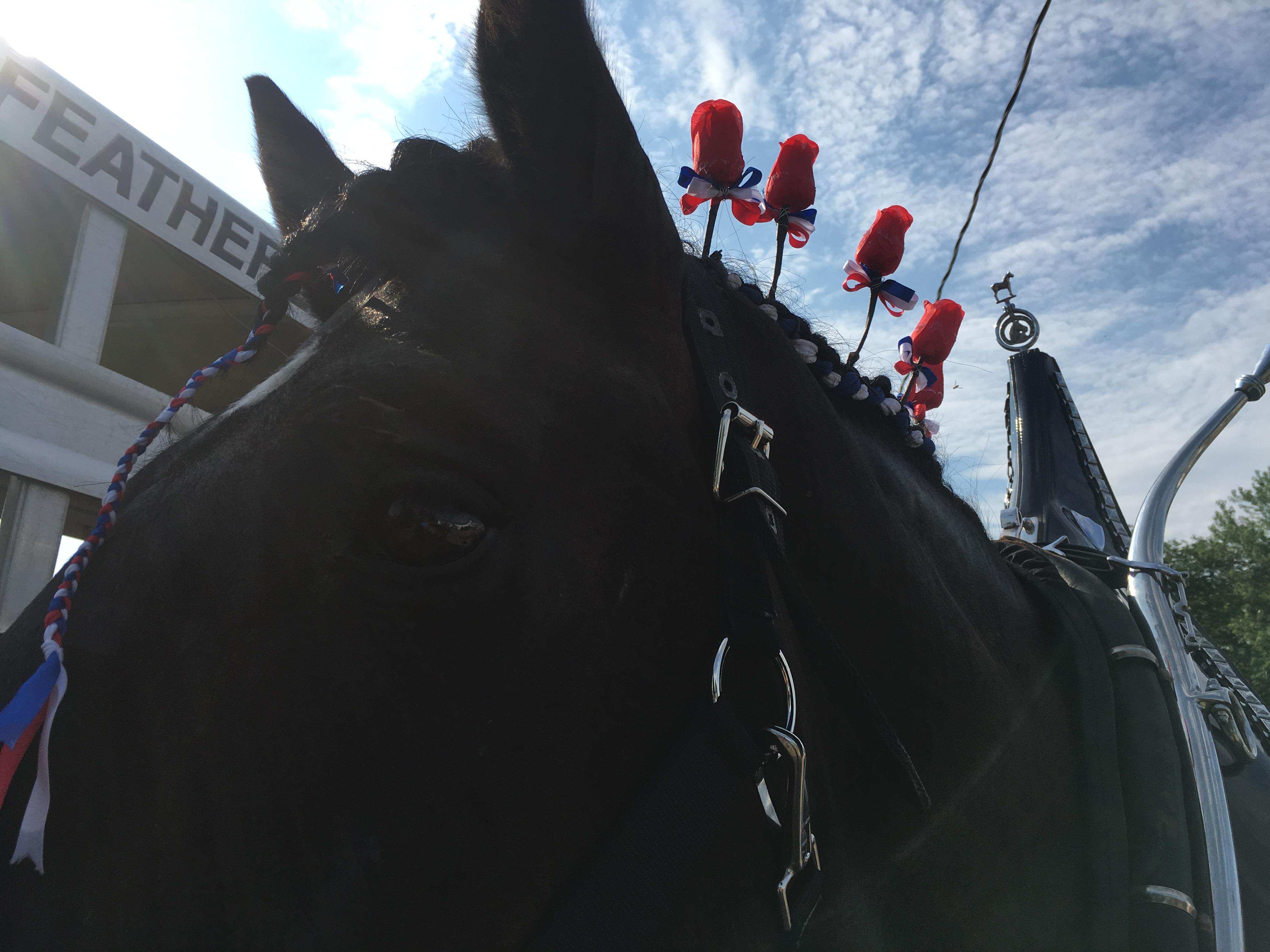