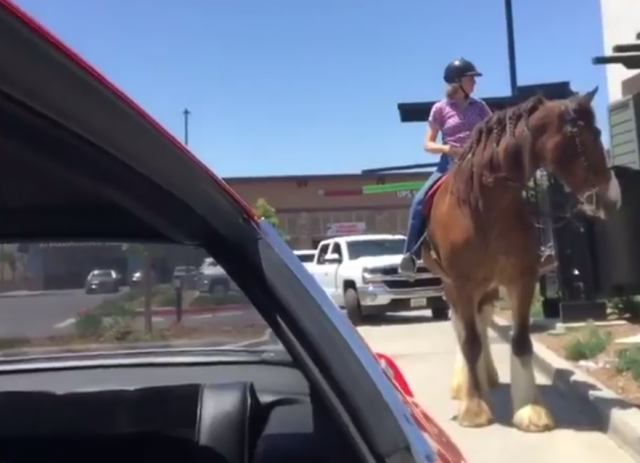 The need for coffee does not discriminate. In fact, equestrians are probably more in need of a buzz than anyone…

Between early mornings and late nights, plenty of mental and physical exertion and the general hard-living nature of equestrian life, we cannot be blamed for having a bit of an addition to caffeine. If the desire for coffee strikes you while you’re actively in the saddle, what better way to kill two birds with one stone than to ride the horse directly to the nearest Starbucks?

We’d like to think that’s what was happening in this particular scenario, but frankly it doesn’t matter — because if I had a saddle-broke Clydesdale, you know I’d be riding that thing through every drive-thru anything I could find within hacking distance.

How many Starbucks in the world have horses going Thur the drive Thur lol ? only in Norco #horsetownusa #norco #horsesworldwide #starbucks

That horse certainly looks like a venti to us. Not entirely sure if that particular model is outfitted with a cupholder, but as long as the big guy neck reins, we can’t imagine there’d be much of an issue!