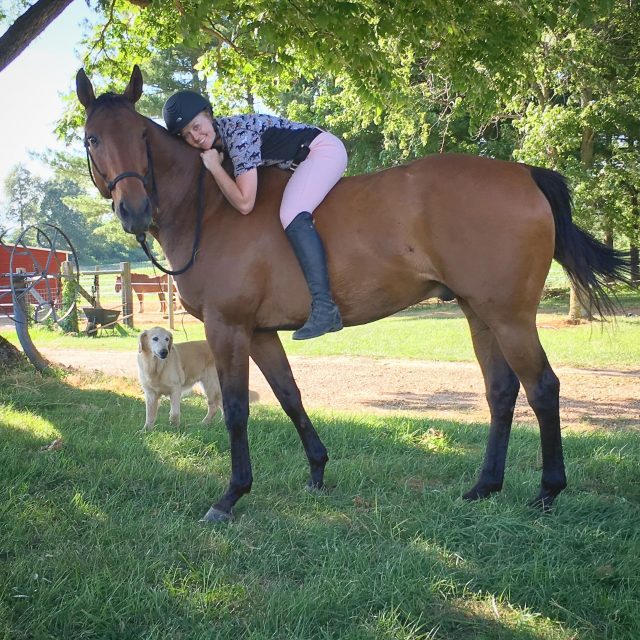 Meagan DeLisle of Jumper Nation closes one door and opens another.

Part of my heart sank a little bit as I watched the shipper pull away with Joey inside, but another piece of me felt like this was the chance for the both of us to have a new beginning. After a few months of ups and downs in our relationship, I made the difficult decision to place Joey, my heart horse, up for sale. It was a gut-wrenching decision and one that wasn’t made lightly. However, it appeared fate would step in to reassure me I made the right choice when one of Joey’s former track connections reached out and wanted to give him a forever home. I couldn’t have asked for a better landing place for my partner of two years, but now his empty stall stared at me begging the question: who would fill the void? Enjoying my last night with Joey before he traveled to his new home in Indiana. Photo by Wayne DeLisle

I have been casually shopping since February for a jumper who could help me eventually move up to the low adults and possibly the 1.10 in time, but the prospects were not very promising. My budget and location played a huge factor in the number of horses I would have the chance to see, but the biggest factor for me was the horse’s personality. After a run of bad luck in the saddle, my confidence was shot. In fact, I was starting to think that if it weren’t for bad luck, I wouldn’t have any luck at all.

I was hopeful, however, that if I found the right horse I would have the opportunity to cash in on some of the good luck I was bound to have stashed up somewhere. My days consisted of sending countless videos to my trainer only to receive back the one-word-response-of-doom: “no.” I persevered, scouring the internet for my unicorn and dreaming of what that horse would be like.

“You need a Mardie,” Jen, my trainer and friend, would say as we looked out at the handsome chestnut former stud who was enjoying his retirement in the field. Knowtorious Son, AKA Mardie, had spent his entire life jumping fence heights larger than the ones I longed to conquer and teaching countless riders along the way. I found myself silently wishing I would have met Jen prior to Mardie’s retirement so I would have had the chance to learn from him. Mardie and the last rider who he took to great heights, Morgan. Photo Courtesy of Morgan McAlister

When my trainer sent me a link to a plain bay Appendix gelding who had evented a bit then spent some time turned out in the field, I hesitated. I was looking for something who had a “been there, done that” attitude and who could be my Mardie; could a horse with a limited show record offer me that opportunity? And then I saw his name: Know Thyme.

He was a Mardie baby.

I figured the next best thing to the teacher himself was one of his progeny, so we coordinated a trial with his owner and breeder, Joanna Russell of Lasting Star Equestrian, and arranged a date for “Ty” to come to Jen’s farm.

The morning of his arrival I showed up at the barn a whopping three hours early. I felt like I was going on a blind date and I guess in a way I was… only this date could wind up being a lot more expensive than any other date I have ever been on.

The heat that day was unbearable and made for a less-than-ideal first meeting. Jen saddled Ty up and took him out to the ring for the first ride. Gunshots from the local shooting range down the road echoed off the hillsides around us, but Ty trudged on. I watched as he trotted around without a care about his new surroundings. Jen took one hand off the reins and put it on the top of her helmet at the trot.

“Meagan!” she exclaimed. “I found your horse.”

There were some giggles at my expense, which I think were justly deserved. As I mentioned earlier, I haven’t had the best of luck since my fall during the George Morris clinic at Jen’s farm last year that resulted in six stitches to my chin. It became crucial that the next horse in my life be a bit of a schoolmaster to help me regain my confidence and get me back in the field when George returns to Altamonte this fall. After Jen flatted Ty and popped him over some fences, it was my turn to hop on. Despite only having limited rides in 2018, Ty was very polite and respectful. We got to know one another on the flat and Jen directed us towards a few small fences. We jumped around a small course, before retiring because of the extreme heat.

I left that day liking the idea of the horse, but unsure if I could make a decision on a more substantial investment based off of a 30 minute ride. I immediately grew nervous about the prospect of making a rushed decision and knew I needed to take a day to think about the pros and cons of the situation. Ty stayed at Jen’s farm, and I made arrangements to make the 2.5 hour drive back to the barn after I got off work on Tuesday for one last ride before he was vetted on Wednesday.

When Tuesday rolled around I was on pins and needles all day as I waited for the chance to see Ty again. Imagine my surprise when I left my warm and sunny hometown and pulled into gray skies looming in the distance a little over two hours later.

“I swear,” I mumbled to myself, “with all this bad luck I have, I am due to win the lottery any day now.” I said a quick prayer that the rain would hold off so I could ride before rushing into the barn to tack up. Typically, we take extra time to flat before our lessons, but with the rain in the distance, Jen had us warming up quicker than usual. Even with the rushed environment, Ty was chill. We walked, trotted and cantered around as a light sprinkle began.

“Go ahead and catch this jump,” Jen called, and as soon as we picked up our canter transition, the rain began to fall harder. We navigated our way around as the wind picked up and started to blow jumps down around us. Ty never batted an eye and Jen continued to raise the poles up taller and taller as we cantered around the ring. Despite all of the commotion, Ty never gave a second glance to any of the fences.

We rounded a corner and I saw that Jen had bumped some of the fences up higher than I had jumped in a long time. There was no time to second guess this new-to-me horse, however, so I gritted my teeth, put my leg on, and rode forward with confidence. Ty popped over the large fence with ease. As the course went on, I had a realization. Even though I barely knew Ty, I already knew what to expect from him. I knew I could trust him. I knew he would jump, even when the rain was blinding us both.

And I knew he had to be mine.

There is nothing like jumping a huge course in the pouring rain to make up your mind on whether or not to buy the horse. We ended the day with a light hack as the rain dripped from every inch of our bodies and I felt a huge smile grow across my face. It had been a while since I had felt that confident in the saddle and it was amazing to me how one horse could change that mentality so quickly. I waited anxiously for the vetting the following day, so I could try to seal the deal on this special horse. My run of bad luck finally died down. I definitely “won the lottery” when I found this guy. Photo by Wayne DeLisle

Thankfully, the vetting went very well (even though it wound up being a few hours late and by the time the vet had arrived at the farm there was nothing left of my fingernails). As I hung up the phone with his former owner after agreeing on a price, tears sprung in my eyes. I felt like my luck had finally turned around. I could see my dreams coming back into focus and knew that I had made the right decision. After all the rounds of back luck, I had finally won the lottery when I found Ty.