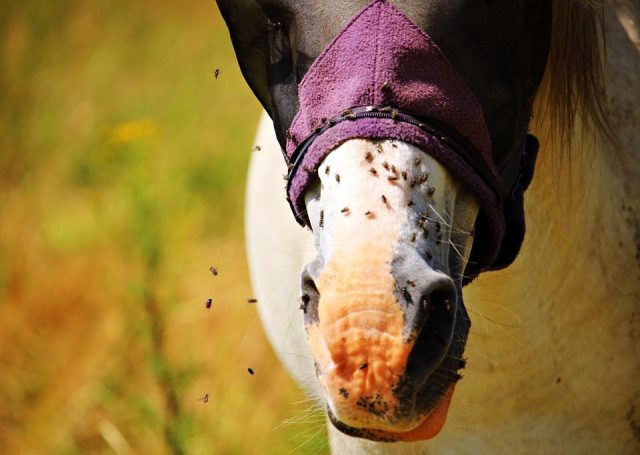 Entomologist Marty Matisoff has the scoop. 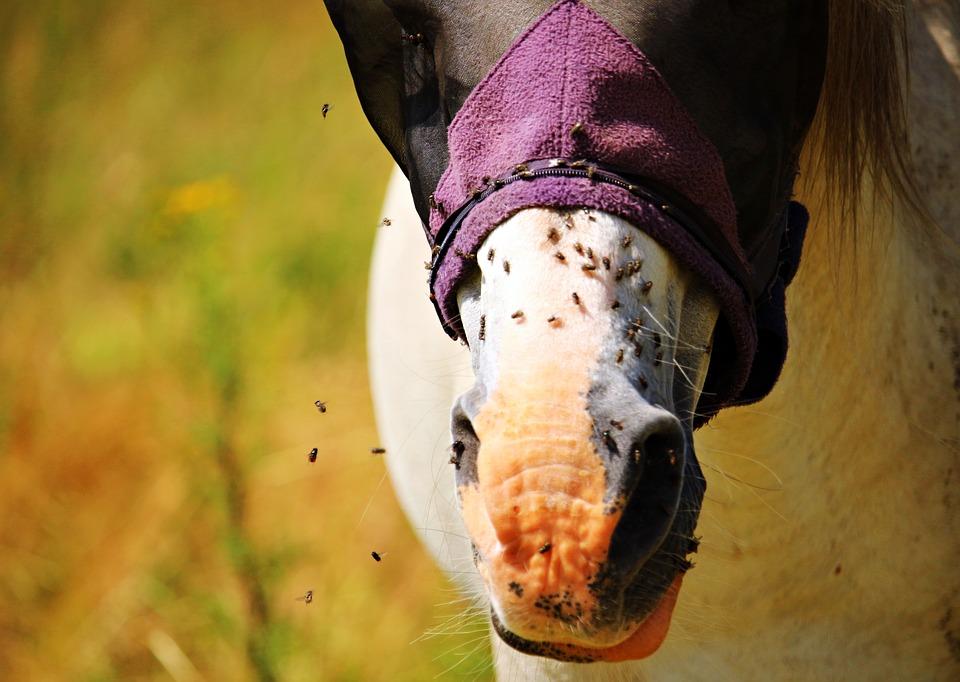 One of the biggest problems horse owners must contend with is pest insect control. There is no 100% effective method for controlling insects in barns or in fields; however, there are some measures you can take to manage insect pests.

My wife and I were delivering one of her equine paintings to a collector in Lexington, Kentucky. I noticed there weren’t many insects flying around. The horses, however, including a colt and filly, were wearing masks. I asked Dawn, the farm manager, how she controlled pest populations around her horses.

She told me that periodically she releases biteless, stingless parasitic wasps at different locations in their pasture and near the barns where house flies, horn flies, stable flies, and other flies congregate in large numbers. Some of the most effective parasitic wasps belong to the Family Pteromalidae, which includes Muscidifurax raptorellus, Spalangia cameroni, S. nigra, S. endius, Muscidifurax raptorellus and M. zaraptor.

Dawn told me that wasps do an adequate job of controlling flies; however, new wasps have to be introduced periodically to prevent large populations of flies from developing. Flies go through four stages of development: egg, larva, pupa, and adult. The fly pupa is similar to moth cocoons or butterfly chrysalis. Female parasitic wasps lay their eggs in the hard shell-like “puparium” that projects the fly pupa. As the wasp develops, it feeds on the fly’s pupa, thereby killing the fly.

Other insects are effective at controlling pest insects. Adult dragonflies are excellent for controlling midges and mosquitoes. One dragonfly can consume hundreds of mosquitoes each day. Some non-insect animals are as effective, or more effective, than parasitoid wasps. Birds are highly efficient insect predators. A single barn swallow can consume as many as 60 insects in one hour, or 850 per insects per day. Installing bird houses in high pest population areas could reduce the number of insects in the areas surrounding your barns or in pastures. Many birds, such as blackbirds, bluebirds, sparrows, crows, wrens and robins, feed on medium and large insects and spiders. The insects provide the essential proteins they need to survive and reproduce.

Most importantly, birds are not selective, they will eat any insect, including true bugs (Order: Hemiptera), flies (Order: Diptera), even sowbugs (Order: Isopoda), which are not insects but the only land-dwelling crustacean. Birds also eat snails (Order: Stylommatophora), spiders (Order: Araneae), termites (Order: Isoptera), millipedes (Class: Diplopoda), and centipedes (Class: Chilopoda), which are not only pests but can be potentially dangerous.

Many people are under the misconception that many bats have rabies. In fact, few bats do. According to the U.S. Centers for Disease Control and Prevention (CDC), “among bats submitted for rabies testing, only about 6% had rabies.” Moreover, rabies is rarely found in horses. According to an article by David W. Ramey, DVM published in the November issue Veterinary Practice News, there are only 30 to 60 confirmed cases of rabies in horses in the United States each year. Considering that there are approximately two million horses in the United States, the number of rabies cases in horses was ~0.003%.

If bats don’t scare you, I would suggest placing a few bat houses near your barns, and at strategic locations around your pastures. Best of all, bats and birds are part of the world ecosystem. Your only cost would be in bat and bird houses.

With the hot summer weather, there’s no doubt that flies, mites, ticks, and spiders will come out of the woodwork. It is impossible to get rid of all insects, but it is possible to reduce the misery that they cause to us and our horses. I am always on the lookout for other methods of controlling insects. If you do need to use pesticides, use them judiciously. They don’t just kill pests; they are toxic to beneficial insects and other animals.

One other thing Dawn told me: she uses an automatic spray dispenser in the barn that released small amount of pesticides. No pest management program should focus on one methodology. You can use pit fall traps and other methods to collect pest insects around your farm. Once you know which insects you have, you are better prepared to attack your opponents.

Have a great summer! Go riding.

Have an insect-related question for Marty? Let us know at [email protected]!