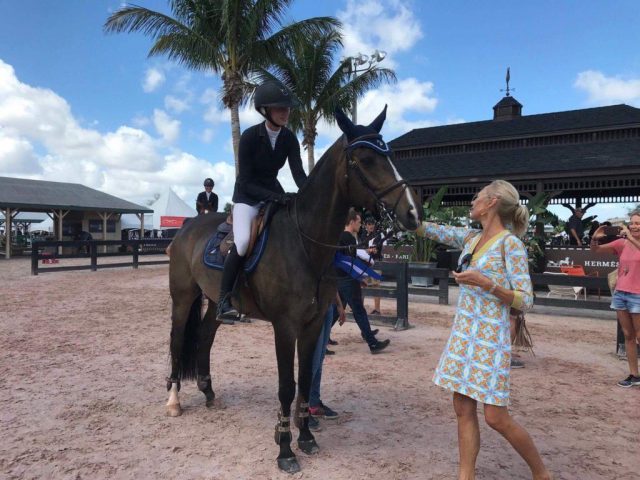 Amateur rider Alma Bjorklund grew up as a pony-loving child in Sweden, but has spent the past five years with her family in Wellington, Florida. With a whole new horse show scene to tackle, Alma began to push herself to new heights under the guidance of trainer, Eddie Macken. As life begins to take her down the road to a new adventure, JN caught up with Alma to talk about her riding career up until this point and what the future may hold for her.

Alma can’t quite remember at what point she started riding, as horses have always been a huge part of her life. Both of her parents rode throughout her childhood and Alma grew up immersed in the horse show atmosphere. It was only natural that she would follow in her parent’s footsteps and begin to ride herself. Alma with her mother and brother. Photo courtesy of Alma Bjorklund.

“My dad was often traveling during the week,” Alma shared. “Going to horse shows with my pony on the weekends kind of became our ‘thing.’” Both Alma’s mother and father were extremely supportive of her desires to grow as a horsewoman and with each passing year, Alma blossomed. At the age of 12, Alma attended the Swedish championship for small ponies and later competed at the European Championship in the large ponies before making the leap to horses. Looking back, Alma cherishes the opportunities she had as a pony-jockey in Europe.

“Personally, I find that getting the opportunity to compete at a higher level and on a team on ponies is not only fun and an amazing learning experience, but also a way to introduce younger riders to the workings of the highest level of the sport,” she noted.

With Alma and her brother, Viggo, so deeply invested in the horse show scene, the Bjorklund family was willing to do whatever it took to help them pursue their passion, including making a major life change. After visiting Viggo’s trainer at the time in Wellington, Florida, the Bjorklund family fell in love with the atmosphere in Wellington and decided to extend their visit.

“Originally we were only supposed to stay for a year,” Alma recalled. “But once it was decided that I would go to an American college and Viggo was able to attend his remaining years of high school here, we ended up permanently moving. I believe that to my family, Wellington was unique in the sense that it is so completely centered on the equestrian lifestyle, and it very quickly became home to us!” Alma and her mother celebrating after winning the high classic in Wellington this winter. Photo by Annie Lever.

Alma enrolled in the University of Miami with a major in political science, but she didn’t want to slow her momentum in the show ring. When the chance to train with Ireland’s highly decorated trainer Eddie Macken opened up, she jumped on the opportunity.

“I feel very lucky to be able to learn from someone who not only has won pretty much everything there is to win, but who also is an inspiration outside of the show ring. Despite all of his accomplishments, Eddie is humble and considerate to everyone around him and he always puts the horses first,” said Alma.

Having been raised with a German-style riding foundation while in Sweden, Alma is very thankful for her strong foundation in flat work, but says that she had a couple of things to focus on upon moving to the States.

A great week for these two siblings @almalinneab and @viggobjorklund winning the under 25 Nations Cup and the High Amateur Classic. Well Done Alma and Viggo! #WEF4

“When I first started training with Eddie, the main thing we worked on was for me to be lighter in the saddle. I remember that during one of my first lessons with Eddie, I was jumping around on one of my horses, and when I finished he said something along the lines of, ‘that’s good, but you ride with a lot of seat and leg, and it doesn’t suit you.’ Up until that point I had always kind of assumed that a strong rider was a better rider, and Eddie helped me realize that that isn’t always the case. I think that lightening my seat up has made a big difference for me in the ring in the sense that it has made me a smoother rider and helped me stay out of the horses’ way, trusting them to do their part.”

A Summer of Success

That little bit of polishing, thanks to Eddie’s guidance, gave the young amateur the edge she needed to step up her game in the ring. Partnered with some phenomenal horses, Alma has worked her way up to competing in several grand prix classes up to the 1.50m level. Most recently, Alma brought home two first-place finishes at the Lexington International CSI2* stop of the Split Rock Jumping Tour aboard the 14-year-old Swedish Warmblood, Flecu.

Originally her brother’s mount, Flecu has been in the family since 2015. However, when Viggo started college in California this past fall, Alma took over the reins. “He is quite the personality,” she shared with JN. “He is very obnoxious. He knows just how good he is and insists he is treated accordingly. God forbid someone walks by his stall at the show without stopping to give him a treat or a pat. He is, however, lovely to ride both on the flat and in the ring. He always wants to win and is both careful and scopey.”

Coming off of their first place finish in the High AO/JR Jumper class at the Kentucky Spring Classic, Alma knew Flecu had what it took to come out on top at Split Rock. “I was going into both classes trying to win,” Alma stated. “Flecu had been going fantastically the past couple of weeks and I figured we had nothing to lose.”

And Alma was right! The duo tore through the $1000 High Jr/AM Speed round on Friday and came out a whole four seconds faster than the second place finisher with a time of 49.602 seconds. While the round was lightning fast, Alma and Flecu made it appear effortless as they floated around the ring in style.

Hoping to continue on with their momentum, the pair returned to the ring on Sunday for the $7500 Horseflight 1.40m JR/AM final where they delivered a flawless first round. Four riders were clear for the jump-off and Alma knew she and her partner were going to have to deliver their best in order to bring home another blue. Their expertly navigated jump-off course helped them seal the deal. With each finalist just shy of a second apart from one another the race was tight, but Alma and Flecu secured the win on a jump-off time of 35.538 seconds.

Next on the show docket for Alma is the CSI2* in Bolesworth, England where she hopes to maintain her competitive edge before she begins to focus on a career. “My long-term goals and riding career in general are a little more up in the air. Although, I hope to be able to continue to compete on a smaller scale,” she shared.

As much as Alma loves riding, she is content competing as an amateur. “I love riding and it is a huge part of who I am, but it is first and foremost a hobby,” Alma told JN. “I have always been very focused in school, and determined to eventually pursue a career outside of the horses. I think this is partly due to the fact that I grew up in a family where academics are valued very highly, but I also think that I realized pretty early on in my riding career that making it as a professional rider at the top level is no easy task — even the most talented and hardworking riders don’t always make it. So I kind of looked at it and decided that although I love riding, there are other things that I am passionate about as well, and perhaps better suited for.”

For now Alma, just wants to enjoy her time in the saddle and continue to grow and learn as a rider. With the undying support of her family and a fantastic trainer to guide her along the way, there is no doubt that Alma has all the opportunities in the world to see her dreams unfold. JN wishes Alma the best of luck in England this week and we hope to continue to see her across our radar in the years to come.