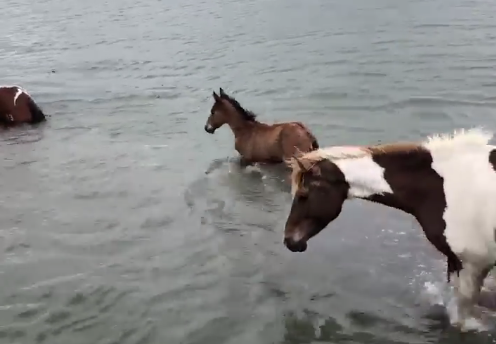 The famous Chincoteague Ponies actually call Assateague Island home, but the history of the ponies is inextricably linked with the history of both islands and the Virginia herds are owned and managed by the Chincoteague Volunteer Fire Company. The ponies have been made famous by Marguerite Henry’s book Misty of Chincoteague, and are still driven across the channel for the historic swim from Assateague to Chincoteague each year before thousands of spectators. On Chincoteague, the ponies are paraded through town and then a select few are auctioned off as a fundraiser.

However, it’s not just on Penning Day that the ponies go for a swim. While the ponies don’t cross the channel from one island to another on their own, they do occasionally go for a dip in the bay to cool off and temporarily relieve themselves from flies. This lucky boat tour got to witness one such little swim firsthand, with what might be the very first time in the water for some of these foals:

And for today’s excitement, a mini pony swim!

The feral ponies are obviously quite accustomed to observation and boat traffic, and we’re sure that these youngsters will be ready to go by the end of July for the traditional Pony Penning and swim!