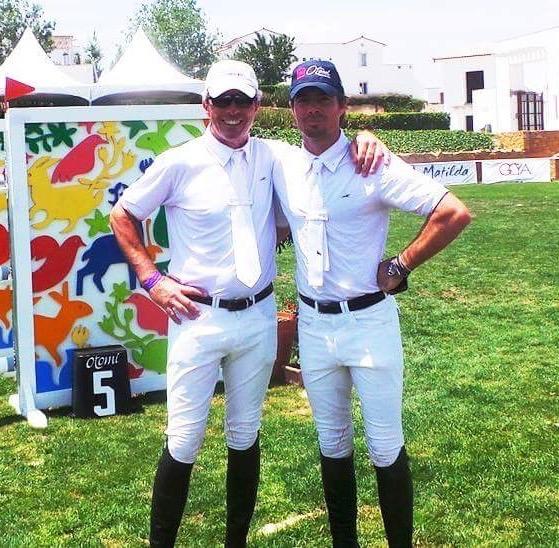 For young professional Theo Genn, achieving his goal of representing the United States on an international level starts with building a foundation for his up and coming mounts. Despite a later start in the saddle, the 28-year-old son of professional rider Wilhelm Genn has spent the past ten years developing his own career in the irons with the hopes of donning that red show jacket one day. JN caught up with Theo to talk about acquiring his love of riding on his own time, the foundation his father instilled in him as a rider and how one quirky chestnut mare is helping him check off some boxes on his riding career.

Destined for the Saddle

As the son of German-born show jumper Wilhelm Genn and his wife Patricia, who competed in the hunters, Theo was born to be a rider. But unlike most children of equestrian lineage, Theo didn’t pursue showing until his early teen years. “My mom actually stopped riding as I grew up,” Theo shared with JN. “But my dad has always shown, so I have always been around horses. In the summers I would go to the horse shows with him and watch.”

In his younger years, Theo found he was more interested in others sports and would only ride on occasion a few times a year. Eventually, however, the atmosphere of equestrian life wore off on him, and he realized quite quickly that he wanted to pursue a career as a professional rider. Despite his mother’s hunter history, Theo dove head first into the jumper ring at the age of 13 and has been in love with the sport ever since. Riding Chaccomo 11, a nine-year-old in Theo’s string that he is excited to continue developing. Photo by Jeanne Pitre

“I grew up watching my dad go in the Grand Prix ring and knew that is where I wanted to be,” shared Theo. “My first show ever was the Biltmore show, and it was on a horse that my dad owned that he would do in the opens. It was kind of a packer type. I showed in one class, and then the horse got sold, so I didn’t show for another five or six months until my dad bought me a new horse.”

Once that new horse came into his life, however, Theo’s passion ignited like never before. Immediately upon turning 18, Theo declared his professional status and vowed to follow in his father’s footsteps.

Theo’s father, Wilhelm Genn, came to the United States from Germany in his late 20s and brought with him a strong flatwork foundation that he passed onto his son. Theo describes growing up with his father’s knowledge of the sport and horses in general as a significant advantage to his growing career.

“Obviously my dad believes very strongly in the good old German flatwork, but in the ring he believes in keeping the horse light and happy. A lot more like the American way of riding than you would think.”

Theo aims to maintain that balance in his development of young horses each day. “It just makes sense. There is a reason why you do the flat work. You are trying to train the horse to be an athlete and be loose and powerful and to trust and listen to you.” Wilhelm and Theo Genn get to share their love for the sport with one another. Photo courtesy of Theo Genn.

“It is extremely competitive,” laughed Theo, “but in a good way. It’s very, very positive. But I always say that if it weren’t for always being in the same shows with my dad growing up, I would probably have an incredible record. I probably have 20 or so second places where he won a Grand Prix, and I came in just behind him.”

Theo’s interest lies in developing horses for competition and currently has ten under his supervision at the family farm, Rheinland Farm, in Lebanon, Ohio. One of those horses is Posh, a ten-year-old chestnut warmblood mare by Jupiter. Theo piloted Posh to two first-place finishes at the Lexington, Kentucky stop of the Split Rock Jumping Tour.

“Our friends [Paula and Tory Watters] actually bred her to be a hunter,” said Theo. “The mother was a good hunter mare, and Jupiter is more a hunter stallion. But she was a little crazy as a young horse, and they decided to send her to us.”

Posh lived up to the typical chestnut mare stereotype in her earlier years of training. “She was a little on the wild side,” Theo chuckled. “Just a bit unpredictable, but she always had a really correct jump. We didn’t know how scopey she was or how much canter she would have, but she was careful and she was brave.”

Her sassy personality led her to have a bit of a slower start than most young jumpers. It wasn’t until last year where the mare started to come into her own and all of Theo’s hard work finally paid off. After a successful winter at WEF where Posh had several top five placings, the duo topped the podium at Split Rock in the $1,000 Hallway Feeds 1.30 Speed class and the $5,000 LV Harkness 1.40 Winning Round class.

Theo couldn’t be more proud of his feisty partner. “She’s amazing. Everyone loves her. If we could have ten Posh’s we would have sold them all this past winter!”

Working with horses like Posh who have potential but need a little polishing has helped Theo get to this point in his career. He is hoping that the development of a few other horses in his string will lead him to his goal of representing the United States on a national level.

“The process of getting to that point is going much slower than anyone would want it to be, but I have the best group of horses that I have ever been lucky enough to work with right now,” he said. Theo Genn aboard Boucanier, his twelve-year-old mount, celebrating a victory in Mexico. Photo by Anwar Esquivel

“I have one very experienced twelve-year-old that I was just in Mexico with, that’s a horse that if I get to keep him long enough, I could try and get on a team with. I have two really exciting nine-year-olds which I think could jump hopefully between the 3* and 4* level, but they are just nine and are working their way up at the 2* level now. Realistically, those goals are still a year or two away. Right now it is just about developing those horses into the type of athletes I need to pursue the team.”

With his sights focused on the future, Theo is pushing on through 2018 to continue building strong bases for his horses and to carry on the family legacy, no matter how long it might take him to get there. “It’s very easy to get discouraged in this sport for many obvious reasons. I just try to not compare my path to anyone else’s and keep working on what I need to do.” With an attitude as humble as Theo’s, we expect to see his name in the headlines much more as he continues to grow.