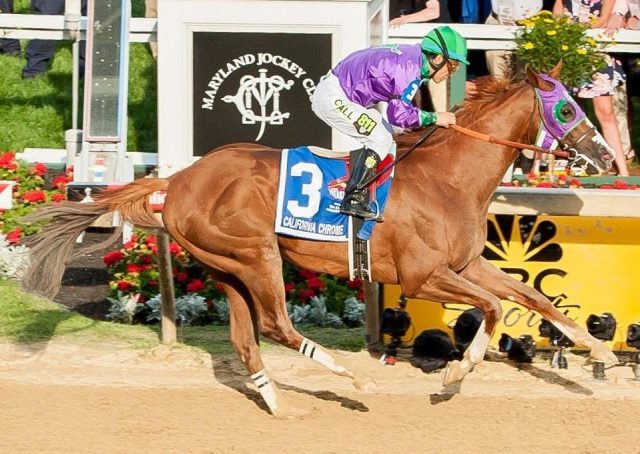 History will be made on Saturday in the 150th running of the Belmont Stakes: but whether Justify will join the illustrious elite who have won the Triple Crown or earn his spot on this particular list remains to be seen. 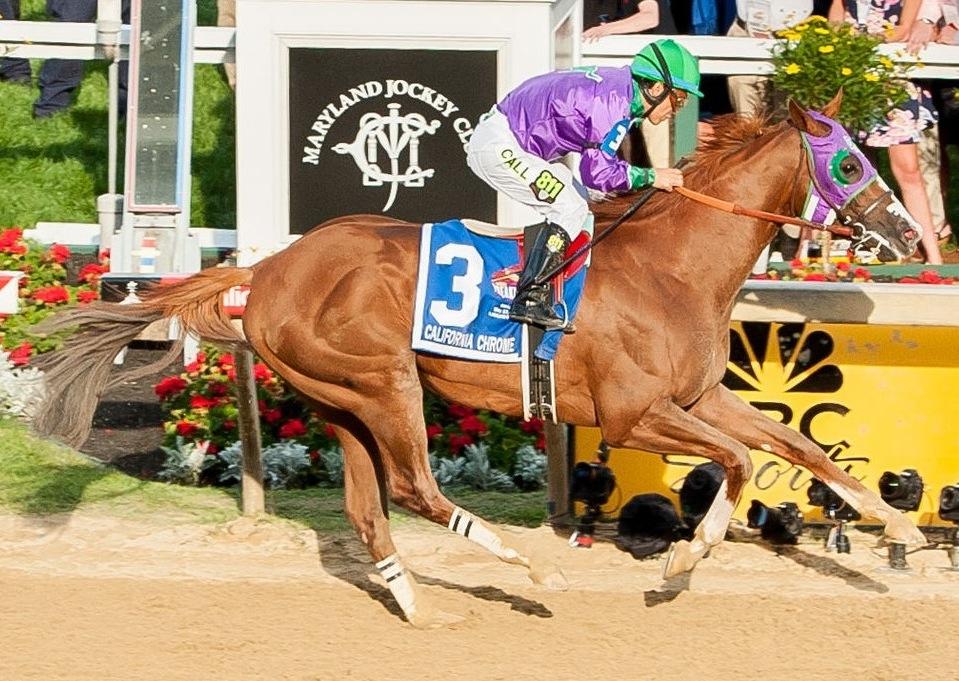 As astute fans of horse racing know all too well, we crown annually new champions in football (the Super Bowl), baseball (the World Series), hockey (the Stanley Cup) and basically every other traditional ball sport — but it can be decades between Triple Crown champions. The most elusive prize in racing is taken only by the true champion, the greatest athlete of his generation.

Until 2015, I had never personally witnessed a Triple Crown champion until American Pharoah ended a 37-year drought — but I had seen my fair share of heartbreaking defeats over Belmont Park’s “Big Sandy.” The final race of the Triple Crown, the mile and a half Belmont Stakes run over the sprawling, sweeping track, denied year after year of hopefuls.

The Triple Crown first became recognized by sportswriters in 1930 when Gallant Fox captured the Kentucky Derby, Preakness Stakes and Belmont Stakes. Sir Barton had won all three races previously in 1919. Our countdown begins in 1932.

The circumstances around Burgoo King’s skipping of the Belmont Stakes are somewhat shrouded in mystery as to whether the colt had suffered an injury prior to the race or if his connections had failed to turn in the proper paperwork to enter him, but we know today as fact is that the colt definitely suffered some sort of injury in June of 1932 that would prevent him from returning to the track until 1934 to win two out of his five starts.

Bold Venture went off at long odds in the Kentucky Derby, suffered a terrible start after getting slammed by another horse just out of the gate, and still managed to win. He overcame another poor start to win the Preakness, but then suffered a bowed tendon and was retired to stud.

Pensive was the first horse to win the first two legs of the Triple Crown and contest but lose the Belmont Stakes since the Triple Crown was first recognized: he took the Kentucky Derby going away by four and a half lengths and then won the Preakness, then run just one week later. Bounding Home got the better of him in the long Belmont Stakes by half a length, and Pensive never won again.

For anyone who feels that the “new shooter” phenomenon, in which horses skip the first two legs and then run in the Belmont Stakes fresh, is a new development in racing, look back at Tim Tam’s failed bid in 1958: in the Belmont, the colt fractured a sesamoid and was beaten by Irish-bred Cavan, who had not contested the previous Triple Crown races. Whether Tim Tam would have beaten Cavan had he not suffered a career-ending injury is open for debate. Tim Tam went on to stand at stud.

Carry Back’s career is still mind-boggling to think about: he raced 21 times as a juvenile and managed to win both the Florida Derby and the Wood Memorial as a three-year-old in the lead-up to the Kentucky Derby. Traditionally a late closer, his impressive kick never quite kicked in for the Belmont Stakes. It was later revealed that the colt had been injured, but continued to rack up a grueling race schedule for the rest of his three-year-old year and subsequent seasons.

Northern Dancer set a new record in the Kentucky Derby that would stand until Secretariat came along, then took the Preakness while tiring just slightly at the end. Whether the horse truly could not go a mile and a half or was simply tired from the Triple Crown campaign, Northern Dancer failed to fire in the Belmont and Quadrangle, who had opened up a rather commanding lead, took the final jewel.

In a shockingly uncomplicated story, Kauai King took the Kentucky Derby and the Preakness, but was beaten by Amberoid in the Belmont Stakes.

Forward Pass won the Kentucky Derby by disqualification of the winner Dancer’s Image; he then went on to win the Preakness over Dancer’s Image by six lengths. Amidst concern from sportsmen that Forward Pass would win the Belmont and be an “illegitimate champion,” he was beaten by a fresh horse named Stage Door Johnny, better bred for the mile and a half.

Majestic Prince won the Kentucky Derby and the Preakness Stakes in exciting fashion, dueling Arts and Letters in both. However, his trainer Johnny Longden reported a developing injury post-Preakness that had prompted him to skip the Belmont and rest the colt in California; pressure from both the media and Majestic Prince’s owner put the colt in the race anyway. He was beaten by Arts and Letters and never raced again.

Cañonero II hailed from Venezuela and while he had zero respect from bettors in the Kentucky Derby he surprised everyone by winning by nearly four lengths. The performance was deemed a fluke, but he went on to win the Preakness as well. Unfortunately, plagued by a foot infection, Cañonero II did not rise to the occasion in the Belmont Stakes and finished fourth.

Spectacular Bid’s Belmont defeat kicked off the 37-year drought of Triple Crown winners, and in controversial fashion: he reportedly had stepped on a pin on the morning of the Belmont Stakes, which likely didn’t help matters, but his loss is usually credited to unusually aggressive riding tactics by his jockey that put him on a fast lead before tiring.

Pleasant Colony placed third in the Belmont, with the win going to Summing, who had sat out the first two legs due to a blood infection.

Alysheba defied expectations in the Derby and the Preakness, but failed to threaten in the Belmont Stakes where he finished fourth, losing to Triple Crown rival Bet Twice with other heavy hitters in the field.

Sunday Silence and Easy Goer had one of the great racing rivalries of the decade: Sunday Silence held off Easy Goer in the first two legs, but Easy Goer turned the tables in the Belmont Stakes and won by eight lengths in the second-fastest Belmont to date.

Kicking off trainer Bob Baffert’s run of near-misses in the Triple Crown, Silver Charm won the first two legs in gritty style, pulling head just at the wire. Touch Gold, ridden by Chris McCarron, used this factor to their advantage, waiting until the last minute to essentially “sneak up” on Silver Charm and make his move, who never backed down from a fight as long as he looked his opponent in the eye.

Real Quiet lost the Belmont Stakes in heartbreaking fashion by just a nose to Victory Gallop. This made the 1998 Triple Crown literally the closest any horse had come since Affirmed in 1978. Victory Gallop had finished second to Real Quiet in both the Derby and the Preakness.

Charismatic appeared to be en route to Triple Crown victory when he took the lead in the memorable 1999 Belmont Stakes, only to abruptly be slowed and then stopped after the finish with jockey Chris Antley leaping off and holding the colt’s left foreleg up off the track. Suffering career-ending multiple fractures, Charismatic was vanned off the track but his life was saved, with credit going to Antley for preventing more catastrophic injuries.

War Emblem was known for being a temperamental horse, but was able to both lead the Kentucky Derby and then settle just behind the leaders before taking the lead in the far turn of the Preakness. In the Belmont Stakes, however, he nearly fell to his knees out of the gate and then bumped another horse, losing lots of ground. While he took the lead briefly after fighting jockey Victor Espinoza, he faded to finish eighth; 70-1 Sarava took the win.

Funny Cide, one of the few geldings in history to win the Kentucky Derby, became a fan favorite quickly with a gritty Derby win and a wire-to-wire sweep in the Preakness by almost ten lengths. After fighting his jockey with too-fast early fractions in the Belmont, Funny Cide tired and was beaten by Empire maker.

This one still stings a little: connections with a heartbreaking story, a gritty colt with an underdog beginning and the makings of one of racing’s fairytales. Smarty Jones continued an undefeated streak in the Kentucky Derby and the Preakness Stakes, but was upset by 36-1 Birdstone in the Belmont Stakes and never raced again.

With his Kentucky Derby victory already shadowed by the breakdown of filly Eight Belles, Big Brown nonetheless was impressive in victory, blowing away the field in the Preakness Stakes. However, his failure to finish in the Belmont Stakes still remains a mystery, with all sorts of factors including patched-together quarter cracks, a loose hind shoe, running rank early in the race and the heat of the day blamed for Kent Desormeaux easing him up.

I’ll Have Another ran down Bodemeister in both the Derby and the Preakness, but scratched just days before the 2012 Belmont Stakes with a tendon injury that ran the risk of become a bowed tendon should he have raced. With a long recovery time required to see if the horse would race again, I’ll Have Another’s connections made the decision to instead retired him to stud.

With the underdog hopes of an entire nation riding on his shoulders, California Chrome suffered a disappointing dead heat for fourth finish in the Belmont Stakes after getting stepped on by another horse at the start and therefore running with scrapes on his legs. This loss triggered his then-co-owner’s infamous rant about fresh horses being allowed to race the Belmont (clearly, he had never heard of Tim Tam — see above). California Chrome’s heartbreaking defeat, however, set the stage emotionally for American Pharoah to “finally be the one” the following year.