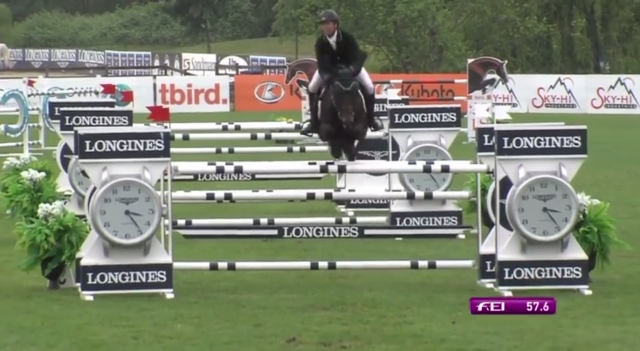 Team Ireland reigned in the North American leg of the Longines FEI Nations Cup in show jumping at the Thunderbird Show Park of British Columbia.

We’ll spare you any “luck of the Irish” cliches — because this team didn’t need luck on their side. The Irish are some of the grittiest, talented show jumpers in the business, with a nearly-unfair proportion of great riders coming off of one small island.

To further assert their domination in the show jumping arena, Team Ireland delivered a round of strong performances in the FEI Nations Cup North American leg, held over the weekend at Thunderbird Show Park in British Columbia, Canada. With the outdoor international circuit in full swing, spectators were treated to a show in the gorgeous grass arena.

Watch the winning jump-off rounds that clinched the win for Ireland:

It proved to be a challenging course for all teams, but the amazing Team Ireland Equestrian shone on an overcast day at the Thunderbird Show Park. They emerged as winners of the final North American leg in the LONGINES FEI Jumping Nations Cup.

It was a damp day but nothing could dampen Team Ireland’s drive — even considering they didn’t need the qualifying points for the North American league. The competition was another testing ground for Ireland’s young and developing team, which is proving to be quite the international force.