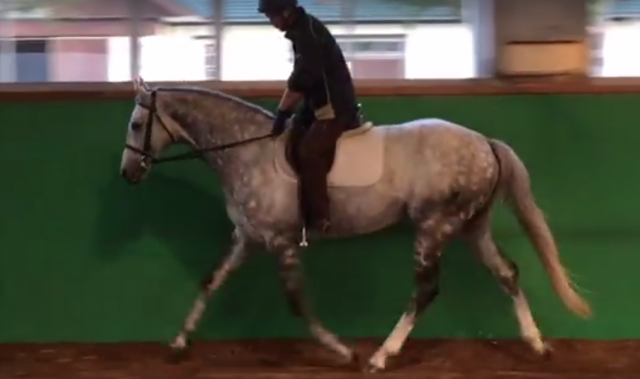 2016 Belmont Stakes winner Creator is standing at stud in Japan, but if this video is any indicator, he could easily thrive as a sporthorse as well!

Two years ago, a gray Tapit colt named Creator edged out Destin in the Belmont Stakes and earned himself a place in history for winning a coveted classic jewel of the Triple Crown. While he failed to impress in later starts in his three-year-old season, he nonetheless caught the attention of breeders worldwide, and was sold to Japan to stand at stud at the Shizunai Stallion Station.

While we haven’t seen his first foals on the racetrack yet, there are likely high hopes for his offspring. However, in the event that this whole fatherhood thing doesn’t work out for Creator, it looks like he could rock a third career in the show ring: watch this gorgeous gray under saddle for his morning exercise!

Several prominent stud farms exercise their stallions under saddle, but Creator certainly stands out as one of the quietest, loveliest-moving young stallions we’ve seen in a while! We wish you all the best, Creator, and just remember us if you want to dabble in the show ring any time soon…

World leaders in equine nutrition. That’s not a claim we take lightly. For 30 years, Kentucky Equine Research has conducted studies that have revolutionized the way people feed horses for optimal health, performance, and growth. With our own 150-acre research farm and dedicated Thoroughbred training center, Kentucky Equine Research conducts more studies than some leading universities.