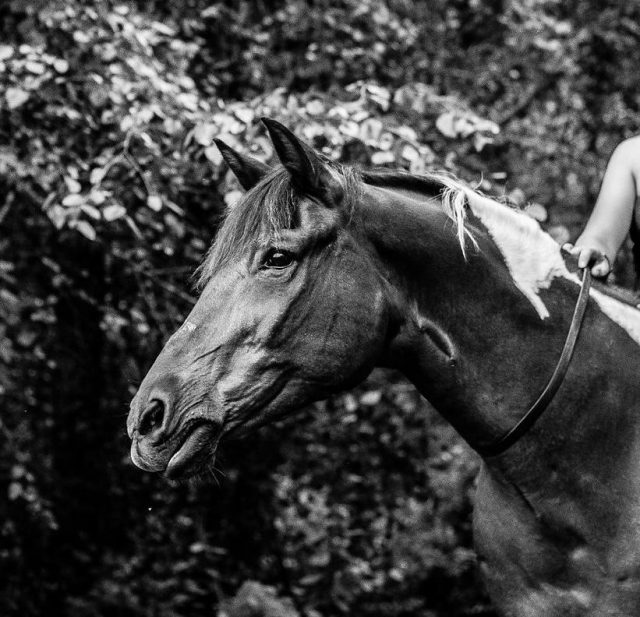 Kasey Minnick tells the story of Gryffin, her heart horse of a lifetime who wasn’t “supposed” to be a lesson horse but relished his new role in semi-retirement. 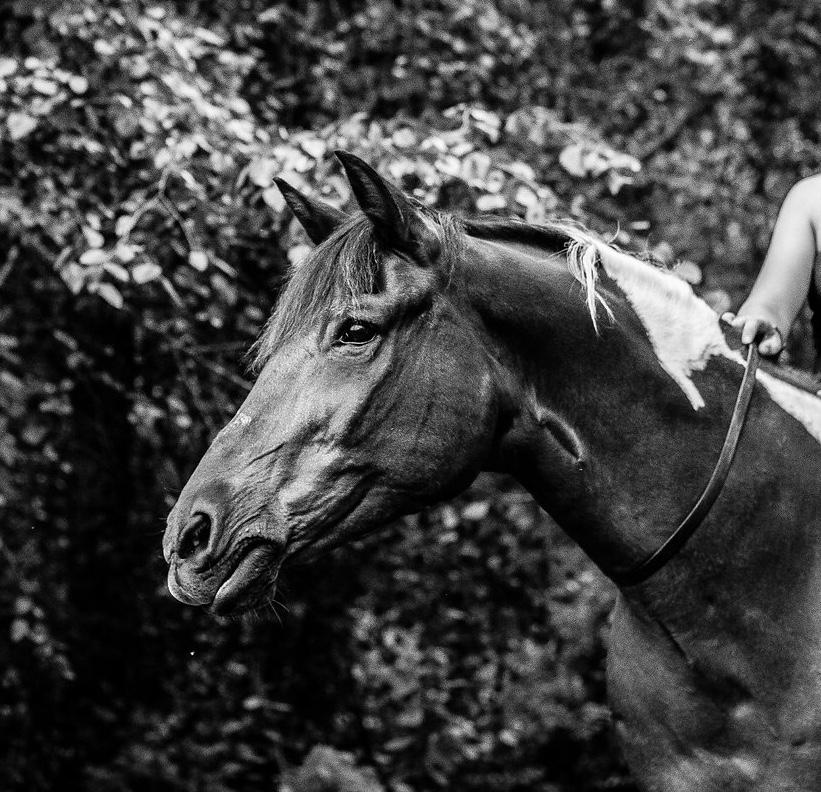 Gryffin wasn’t a lesson horse for long — only about a year, and he wasn’t even supposed to do it for that long. He was a 15h paint horse with a huge personality. He was my hunt horse who had to reluctantly retire at 25 because his hocks just couldn’t take jumping coops anymore. I work at a lesson barn and one of our horses was a camp horse. So when he left to do his summer job I offered Gryffin to fill in while he was away. Gryff was my soul mate and I knew I would enjoy getting to spend that much time with him every day. He had always taken his jobs very seriously and was very bored living the retired life. I thought he would come and put up with the kids for a few weeks and then go back to pasture life.

He took to teaching lessons like a fish to water. He was perfect for every level of rider we put on him. He would challenge the more experienced riders to ask him correctly and give the beginners a bit more help. He even figured out how to do a little trip to throw a kid into the correct diagonal if they were taking too long to change it! He was very good at telling time and knew the little ones only rode for 30 minutes and when that 30 minute mark hit he would slow down, pull the reins, and turn to the middle so they could dismount. It was hilarious. He also knew his lessons tended to start at 3:30 and would always be waiting at the gate when that time rolled around, though the time change did manage to throw him off for a few days. The only thing he wasn’t very good at was being on the lunge  line. He found it insulting and would turn and stare at you if you flicked the whip his way. I have a feeling this had something to do with our years of whipping-in and becoming so used to me using a hunt whip.

Everyone at the barn fell in love with him. He had such a sweet face and even though he put on the airs of a grumpy old man, he loved all of his kids. When the end of the summer came and it turned out that our camp horse was ready to retire completely, Gryffin stayed on and was thrilled to do so. He LOVED being back in a steady job and enjoyed the attention of his loyal admirers. He even took a few of them to their very first shows. He seemed to know better than us what his kids were ready for and would let us know when they were ready to move on.

He unfortunately passed away on St. Patrick’s Day of this year. It was also closing day of the hunt with whom we used to whip-in. He was surrounded by people who loved him. I don’t think he would have had it any other way. He didn’t really enjoy retirement and to go while he had a steady job was definitely the best. His kids were obviously sad and they all still mention him telling me how much they loved him. They wrote me letters and drew me pictures and it means so much to know he will live on in their hearts as the horse that got them hooked.

He always seemed so wise and was able to communicate his thoughts better than any other horse I’ve ever met. Since his passing, we’ve shared stories and come to the conclusion that he knew it was coming. The week before he was a bit more cuddly with me than usual. He decided two of his favorite kids were ready to canter that week and gave them their first taste when he was supposed to just be trotting. Of course he was right and they both handled it beautifully and started cantering regularly in their lessons. His farrier, who absolutely loved him and whom he loved in return, came and did his feet. For the first time in his long career, he accidentally switched Gryff’s front and hind shoes on the left and ended up having to spend an extra 45 minutes with him to correct it. He said Gryff gave him a look like it was the best trick he’d ever played.

I loved that horse more than anything in the world. He was a best friend, a parent, and a child all rolled into one. He taught me so much in our 15 years together and helped develop me as a rider and a human being. We did everything from whipping-in to show hunters to outriding at the steeplechase together. His picture even hangs in the local pub. He was my heart horse and I’m so glad I got to share him with so many other people in his final year.