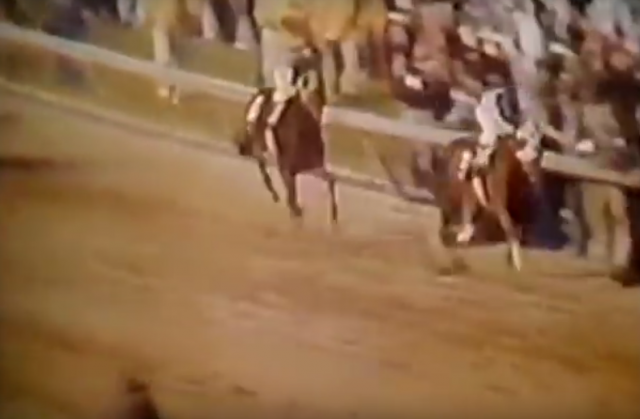 Let me open this piece with a disclaimer: I’m not comparing Justify to Secretariat. I’m a firm believer that we will never see the likes of Secretariat again in my race-fan lifetime — he was truly a separate, special class of athlete, a real once-in-a-century kind of horse, a “tremendous machine.”

But for the superstitious among us, here’s a coincidence that might make you double-take.

Is that enough of a coincidence to suggest the stars will align for Justify, a strapping, awe-inspiring big chestnut colt, to follow in the footsteps of the great Secretariat like an echo through history, perhaps bringing to life for one day a ghost of the past?

Actually, Secretariat’s Preakness victory was all sorts of implausible, making his move in the first turn:

Justify’s winning margin in the Preakness Stakes was indeed small, and growing smaller by the second. Depending on who you ask, Bravazo either could have put him away had the race been merely a few yards longer — or Justify and Mike Smith would have rallied earlier to hold him off, rather than conserving energy and winning on momentum.

Whether you’re a superstitious individual or prefer to make your picks based on cold, hard facts, Justify’s bid for the Triple Crown remains one of the most intriguing, exciting stories to emerge from horse racing in recent years. For an excellent editorial on Justify and his Belmont chances, I recommend Steve Haskin’s Preakness wrap-up.

Thanks to Misti West for the tip on dates.