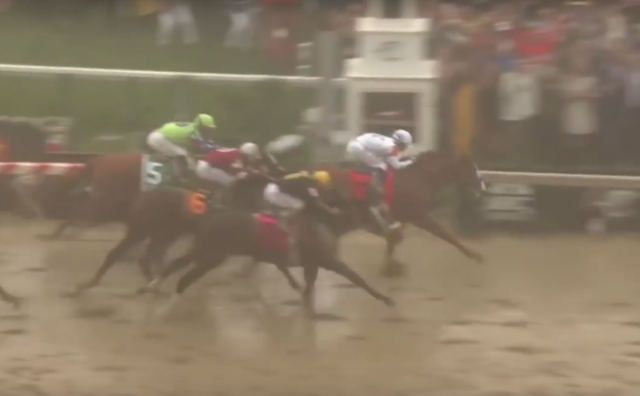 He may have had to fight for it, but Justify remains undefeated after capturing the second jewel of the Triple Crown with a victory in a remarkably foggy Preakness Stakes. Watch the replay here!

Justify had already won the rainiest Kentucky Derby in history — but Mother Nature wasn’t done with him yet. Rain plagued the mid-Atlantic all week long, rendering Pimlico Race Course into a drenched mess. Never before had both the Derby and the Preakness Stakes gone off sloppy, but there’s a first time for everything, and that’s exactly what Justify and three other Derby runners contended with today (Good Magic, Bravazo and Lone Sailor).

Four fresh contenders joined them in the paddock — Quip, Sporting Chance, Tenfold and Diamond King — as the rain ceased to be replaced by a dense fog. Indeed, the entire spectacle of the race was almost eerie, the roar of the crowd failing to penetrate the air: for those of us watching from home, horses faded from view and reappeared again out of the mist. 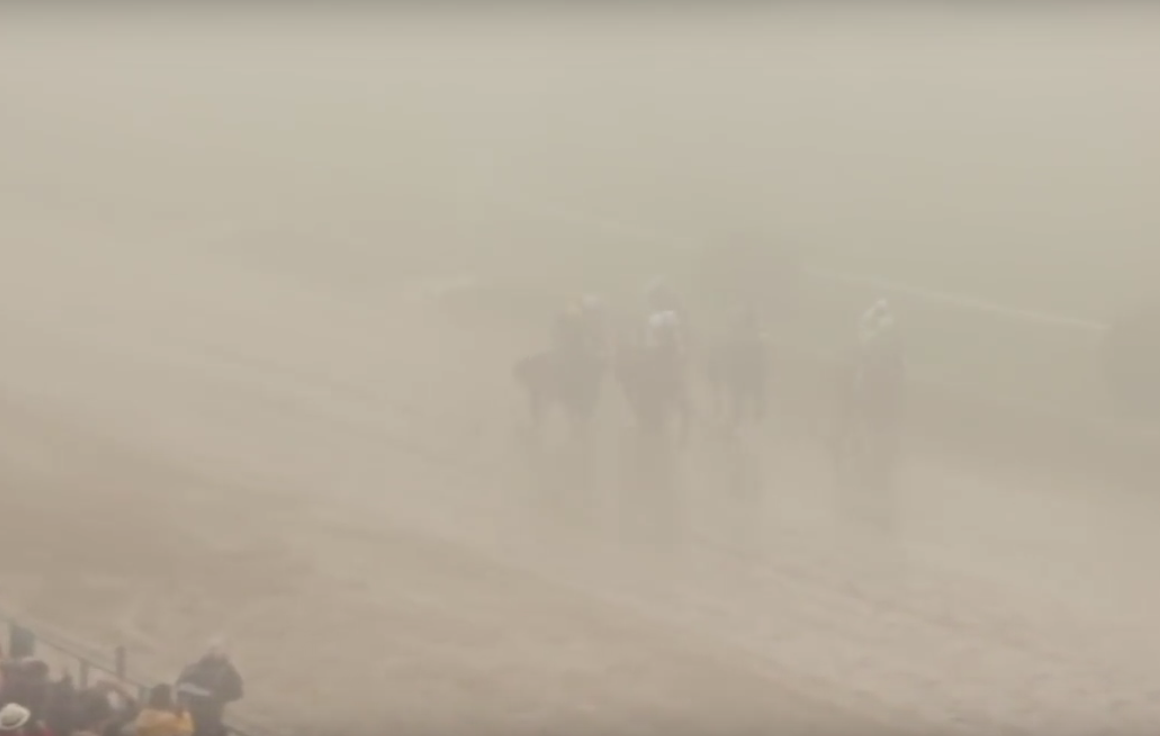 The first pass in front of the grandstand in a surreal fog.

Out of the gate, Good Magic under Jose Ortiz hustled to the lead with Justify and Mike Smith on his outside. The second favorite, Good Magic dictated the pace, dueling stride-for-stride with Justify into the first turn and down the back stretch. Battle was joined.

As the field vanished into the fog on the turn for home, we waited with bated breath — and the twin blazes of Justify and Good Magic blazed through, still matching strides at the top of the stretch. As they dueled for the wire, Good Magic finally folded as Justify, under strong urging, fought his way out front.

Justify and Good Magic emerge from the fog.

But it was far from over — Tenfold and Bravazo were both rushing on strong. But as the field flashed under the wire, Justify was still out front, Bravazo half a length behind. Tenfold and Good Magic were less than a length back.

Provided he comes out of the Preakness in good order, trainer Bob Baffert and owners Winstar, China Horse Club, Starlight Racing and Head of Plains Partners plan to point Justify towards the Belmont Stakes and potential Triple Crown glory. Both Baffert and Smith agree that the Preakness was certainly a test and a challenge that put Justify through his paces in ways he had never been tested — and he fought for his victory like a true champion.