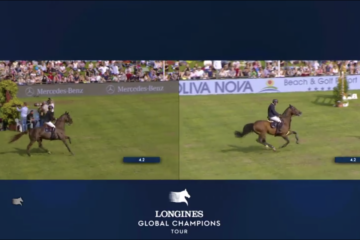 Watch exactly where Harrie Smolders was able to get the jump on his competition at last weekend’s Global Champions Tour event, courtesy of our sister site Jumper Nation!

The competition at the Longines Global Champions Tour in Hamburg this past weekend left us on the edge of our seats. The highlight of the weekend, the LGCT Grand Prix which serves as a qualifying class for the LGCT Super Grand Prix at the end of the circuit, was no exception with rails down left and right throughout the day.

The course was tricky and caused many top-ranked riders to have faults in the first round, thus disqualifying them for the jump-off. Despite his late start in the circuit this year, 2017 LGCT Champion Harrie Smolders of the Netherlands has already proven himself a force to be reckoned with this season and put in a stellar performance in Hamburg to win the Grand Prix on a time of 37.97 seconds.

The only other rider to go double clear in the Grand Prix was Maurice Tebbel of Germany. He couldn’t quite match Smolders’ pace in the jump-off, however, and finished out on a respectable time of 39.14 seconds.

So where was Smolders able to shave off two seconds of his time to claim the win and the ticket to the LGCT Super Grand Prix? Take a look at this split screen so you could find out for yourself.

Where they won it… Check out his head to head, Smolders vs Tebbel!

Posted by Longines Global Champions Tour on Monday, May 14, 2018

Lesson learned: next time you find yourself preparing for the jump-off, trust your horse and make those first few fences count. Channel your inner Harrie Smolders so you can ride to victory!