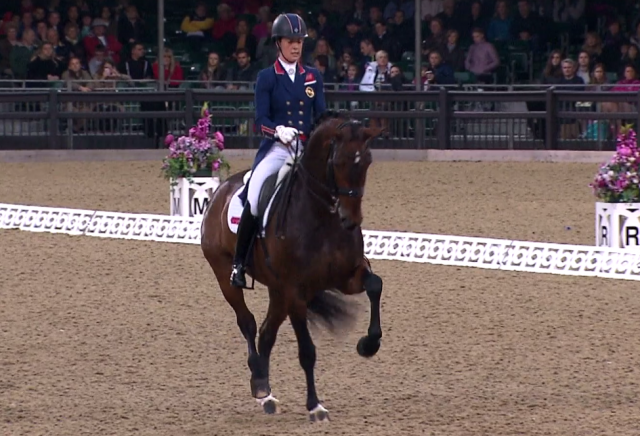 If there’s been a great big Valegro-shaped hole in your heart ever since “Blueberry” retired, allowed us to introduce you to a mare named Mount St John Freestyle.

The partnership between Charlotte Dujardin and the great Valegro was the stuff of legend — the rise from obscurity to international record-setting superstardom is truly what great stories are made of. And we’re not likely to see a magical partnership like that every day.

While Valegro might be retired from competition — he went out when he was on top — fear not, because Charlotte Dujardin isn’t going anywhere. At last week’s Royal Windsor Horse Show, she introduced the world to Mount St John Freestyle, a beautiful mare only nine years old. The pair won the Al Shira’aa Grand Prix, and followed up that victory with another win in the Grand Prix Freestyle with an 81.210:

Congratulations to Charlotte Dujardin and Mount St John Freestyle for winning the Al Shira'aa Grand Prix Freestyle to Music at Royal Windsor Horse Show with a score of 81.210! Watch their fantastic winning performance

For a young mare gaining valuable experience at the international level, the future looks bright for Mount St John Freestyle. Dujardin hopes to show her at the 2018 World Equestrian Games, and we’ll look forward to seeing this pair perform on American soil!