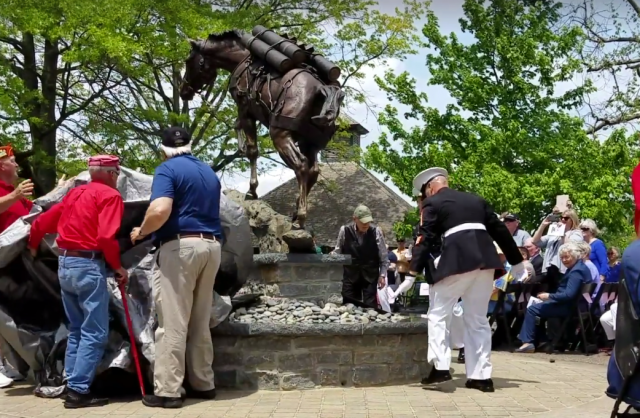 A new memorial statue honoring Sergeant Reckless for her incredible service in the Korean War was unveiled over the weekend at the Kentucky Horse Park.

In 1952 during the Korean War, a racehorse mare was purchased by the United States Marine Corps to be trained as a pack animal for the Recoilless Rifle Platoon, Anti-Tank Company, 5th Marine Regiment, 1st Marine Division. Carrying supplies and ammunition, as well as carrying the wounded, the mare was named Reckless by the Marines.

Reckless quickly established a rapport with the Marines, allowed to roam camp and even coming into tents on cold nights. She had a knack for learning routes fast, and after a few trips delivering supplies on the battlefields could make the trip without a handler. She is famous for her service in the Battle of Outpost Vegas, during which she made 51 unescorted trips to resupply the front lines. She was wounded twice in combat but recovered.

She first held the rank of corporal in 1953 and was promoted to sergeant in 1954 after the end of the war. She was awarded two Purple Hearts among other military honors, and was brought back to the United States to retire. She lived out her days at Camp Pendleton.

Numerous memorials have been established in Sgt. Reckless’ memory at both Camp Pendleton and Semper Fidelis Memorial Park. A third memorial was unveiled this past weekend at the Kentucky Horse Park to honor Sgt. Reckless’ service to the Marines.

The gentlemen aiding in the unveiling all served with Reckless in Korea.

Unveiling of the SSgt. Reckless statue at the park today by the old guard and the new guard of the U.S. Marine Corp. The retired gentlemen all served with Reckless in Korea.

Sgt. Reckless may be gone, but she certainly isn’t forgotten. Now her memorial at the Kentucky Horse Park will allow her amazing story to live on and inform a new generation of horse lovers!