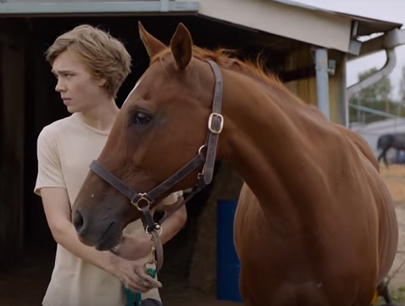 “Worth watching for its skillful execution.”

Lean on Pete, directed by Andrew Haigh, is a somber coming of age story about the effects of hopelessness, and the consequences of running blindly from your problems. Based on the novel by Willy Vlautin, the story follows 16-year-old Charley (Charlie Fuller) as he struggles to find a sense of stability while living with his alcoholic father and his revolving door of girlfriends in Portland, Oregon.

One day while out for a jog, Charley happens upon an old racehorse trainer, Del (Steve Buscemi), struggling to change a flat tire on his pickup. After helping him change his flat, Charley asks the trainer if he’s hiring and acquires a job working on the backside of Portland Downs. His primary duty is caring for a chestnut Quarter horse gelding with the titular name Lean on Pete.

When it becomes clear that Pete’s racing career is coming to an end, Del makes plans to ship him to Mexico for slaughter. “He’s just a horse,” Charley is told repeatedly, a refrain that any horse lover will unequivocally reject. Unable to accept Pete’s grim fate and with seemingly nothing else to lose, both boy and horse head east in hopes of a better life.

I was originally drawn to this film because the trailer prominently features a horse, and while the horse does play a key role in the story, Lean on Pete doesn’t fit the mold for what we’ve traditionally come to expect from a horse movie. Instead of being the focal point of the plot, Pete exists to accent and elucidate Charley’s tragic story. The life of horse and boy seem to mirror one another, with Pete’s overuse at the track for monetary gains reflecting Charley’s father’s financial dependence on him and his ability to work.

The portrait painted of the racing industry is not flattering. In this portrayal, horses are disposable, and dishonest methods are frequently utilized in the pursuit of the mighty dollar. The people within the racing world, even those that began with utmost love of horses in their hearts, have been broken by the harsh reality that is track life. In what becomes a common thread throughout the film, we see the people within the  industry find it impossible to leave a situation that’s clearly detrimental to their own well-being because it seems as there is nowhere else to go.

Screen grab from the trailer.

This is a very well-made film, something I rarely get to say about horse movies. It is well-written with elegant metaphors and skillful foreshadowing. It is brilliantly acted, with Charlie Fuller’s performance in particular masterfully capturing the pain and despair one in his position might experience. The cinematography is beautiful with scenes that are evocative of the iconic Black Stallion beach scene.

With all that said, I can honestly say that Lean on Pete is a film I never need to see again. On top of Pete’s life mirroring Charley’s, the viewer experiences a similar emotional arc to the struggling young boy. After experiencing tragedy after tragedy Charley becomes desensitized to the harsh reality with which he is so frequently faced. Similarly, the audience, after being subjected to images of a 16-year-old boy facing one unthinkable hardship after another becomes increasingly desensitized over the course of the film, and I personally left the theater feeling a bit dead inside. I’m inclined to think that this was an intentional choice made by the director to immerse the audience in the story, and if so, mission accomplished.

Lean on Pete sits in the territory with films like Requiem for a Dream and The Elephant Man, in that it is very good, but in no way enjoyable. If you are already emotionally in a less than ideal place, I would avoid watching Lean on Pete, but if you think you have it in you, it’s a film that is worth watching at least once for its skillful execution. I give Lean on Pete 4 out of 5 carrots. 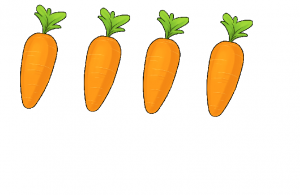