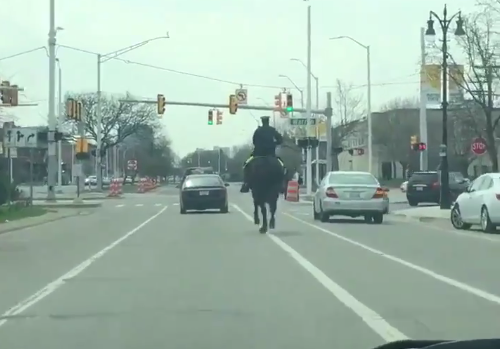 Horses are largely ridden for recreation, whether it’s a nice trail ride or a horse show. There aren’t many working horses left in the modern world — but mounted units still utilize horses for patrol, crowd control, and in a few rare cases, pulling over lawbreakers in a traffic situation.

Case in point: Officer Brandon Murphy of Wayne State University Police Department and Detroit Police’s mounted unit noticed a driver texting and not wearing a seat belt. He urged his mount Remy into gear, and the duo pulled the driver over so he could issue a ticket.

Fortunately for us, the whole thing went down, as it were, on Twitter:

You know you’ve been Wayne Stated when you’ve been pulled over by a cop on horse ????????‍♀️???? pic.twitter.com/ZZNHQOsjmm

Don’t text and drive, folks. And definitely don’t break the law around Officer Murphy and Remy!