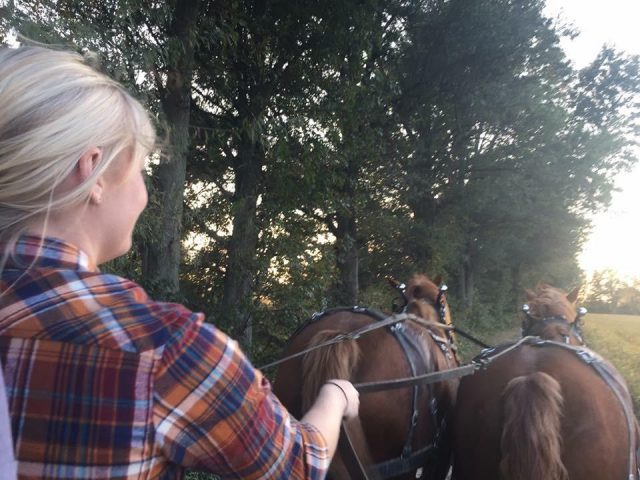 Nothing touches the heart quite like a draft horse team — and when Meagan DeLisle got the opportunity to bring home a team that once belonged to a close friend, she would let nothing stand in her way. Grab a tissue. You’ve been warned.

Two years ago during my brief stint away from horses, I met a wonderful man named Dale Gaebler. I had just moved back to my hometown and was adjusting to my new life as a “grown-up” when my dad suggested I attend the church picnic that weekend. In an attempt to bribe me to step away from my weekend full of Netflix binging he added, “there will be horses there.”

Starved for horse time, I jumped in the car and made my way to the Gaebler’s secluded little farm just 20 miles down the road. It’s funny how these small events can greatly impact our lives — I had no clue how much this one trip would change mine. Upon my arrival, my dad introduced me to Mr. Dale, who greeted me with what I would grow to know as his trademark wide smile.

“Dale, this girl kind of likes horses,” said my dad.

“You are going to fit right in then,” Dale responded and from that moment on, the Gaeblers became like family. 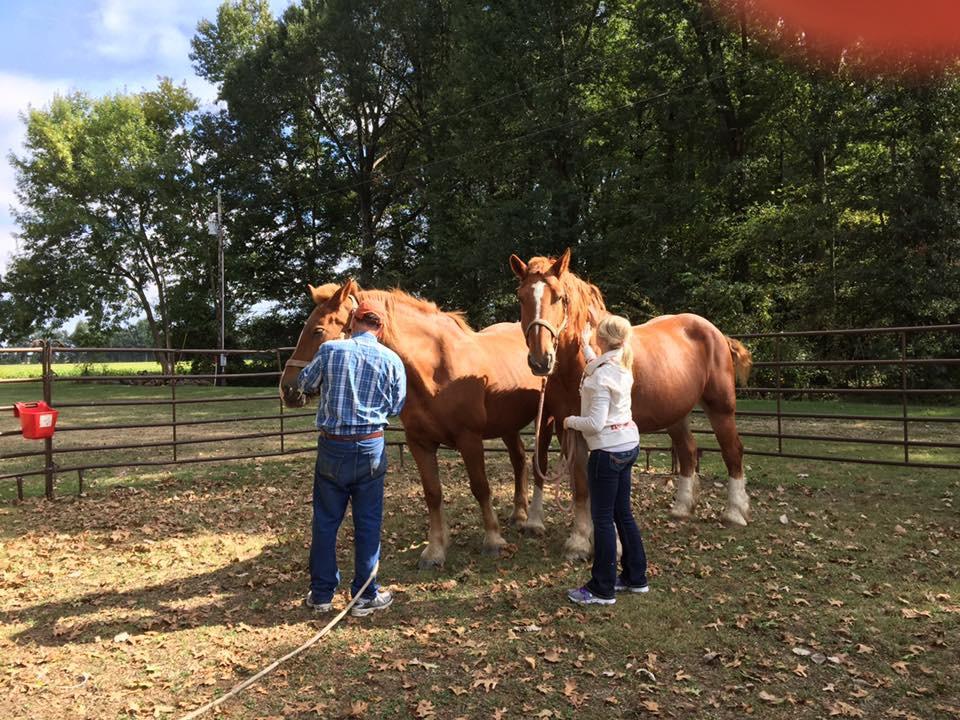 With Molly, Dolly, and Dale. Photo by Wayne DeLisle

Dale took me under his wing and taught me everything I know about draft horses. His team of aged Belgian mares, Molly and Dolly, were the perfect teachers. I learned to harness them and hitch them to the cart and then after a few hours had passed, he handed the driving lines over to me.

I spent many subsequent afternoons in the driver’s seat of that wagon, listening to the chatter of the passengers behind me. Dale was a golden-hearted man who spent years building his dream farm and then opened it up, free of charge, to local churches and youth organizations for special events. Not only did he teach me how to drive and have a generous heart, but he passed on to me the ghost stories that he had developed over time to entertain the kiddos along the rides. Over time, I perfected my spookiest-sounding voice that I would use to tell those tales as we neared the darkest corner on the trail. 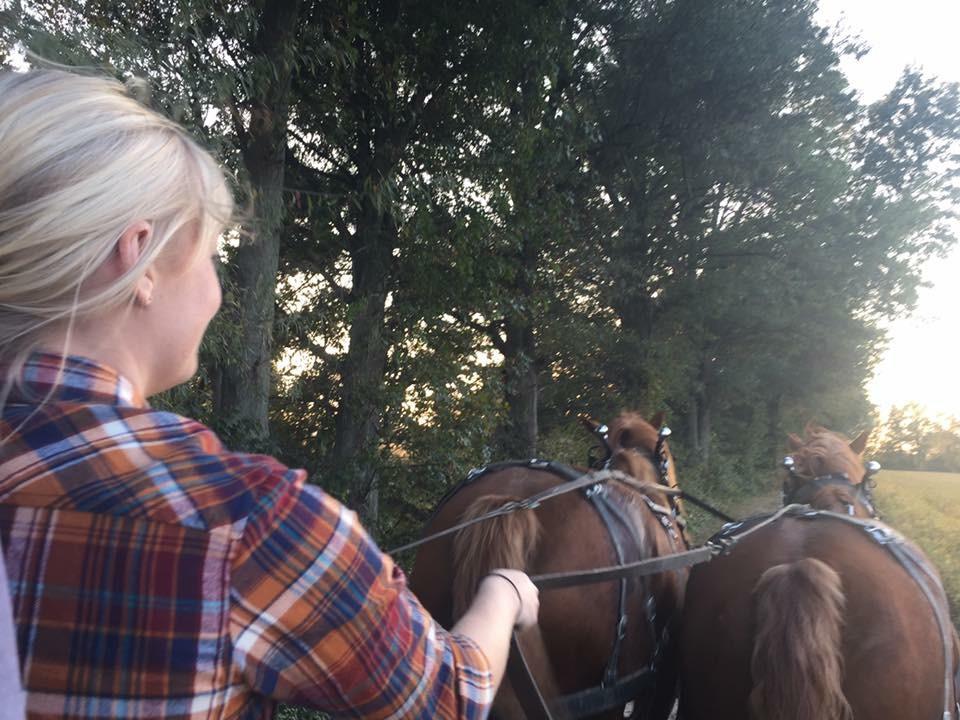 I had missed horses, but truth be told I had fallen out of love with the sport after my own far-fetched aspirations had leeched the fun out of riding. Molly, Dolly and Dale brought back that spark in a short period of time and helped settle my once-anxious heart. Dale reminded me so much of my late Grandpa John, who played a big role in molding the woman I am today, and I thought of Dale as another grandfather figure in my life.

Life changed, however, and Wayne and I moved out of my hometown and further from the Gaebler settlement so Wayne could be closer to his farm. Winter rolled around and Dale closed up for the season. Months passed and I wound up back in the saddle again, this time with a much more peaceful state of mind thanks to my time with Dale. I often thought of those two sweet mares and wished I was closer and able to swing by on sunny afternoons again for a few hours of serenity.

When we moved back to my hometown a year later, the one thing on my mind was getting back to the Gaebler’s farm. I was even closer than I had been before and was itching at the thought of being behind those mares again. Then the unthinkable happened—Mr. Dale passed away suddenly. My heart was broken. The line at the funeral home was hours long, filled with people who had been affected by his bright and shining presence in one way or another. Dale was truly one of a kind.

That was last fall. As I sifted through my phone one day responding to a notification on Facebook, I scrolled past an ad for two big red mares with crooked little stripes down their faces and my heart stopped.

It was Molly and Dolly. 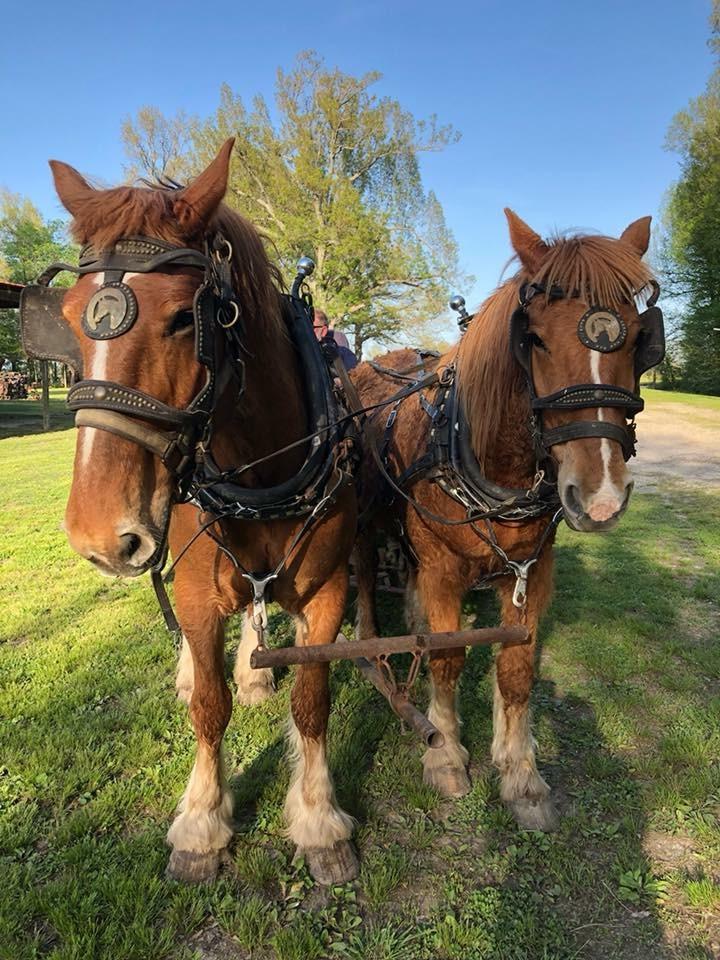 They were consigned to be sold the following weekend at an auction. Everything became a blur. I picked up my phone and I called Wayne sobbing, and bless his heart, he told me to make it happen.

So I did. Phone call after phone call, I tracked down the contact information for his children until I found someone who could help me. It didn’t matter what I had to do — those girls were coming home to be with me. I owed it to Mr. Dale.

I can’t tell you how much it meant to me when I was told, “Grandpa would love to see you take the girls. It would make him so happy.” That was all it took. We agreed on a price and a pickup date and the girls were mine.

On Tuesday afternoon of this week we loaded up and made the drive to Mr. Dale’s farm for the final time. The girls were waiting by the gate and eagerly loaded up on the trailer. Driving away from the farm was bittersweet. I was so happy to have Dolly and Molly in my care, but knowing that they would never drive the perimeter of that property ever again was a little sad.

The girls have settled in nicely at home and greet me in the morning with soft little whinnies. Molly nuzzled my neck as I curried away what was left of her winter coat and Dolly found herself a nice spot to lay down in the sunshine next to their hay so she could munch and relax. I stayed out with them until dark that night just soaking in their presence. 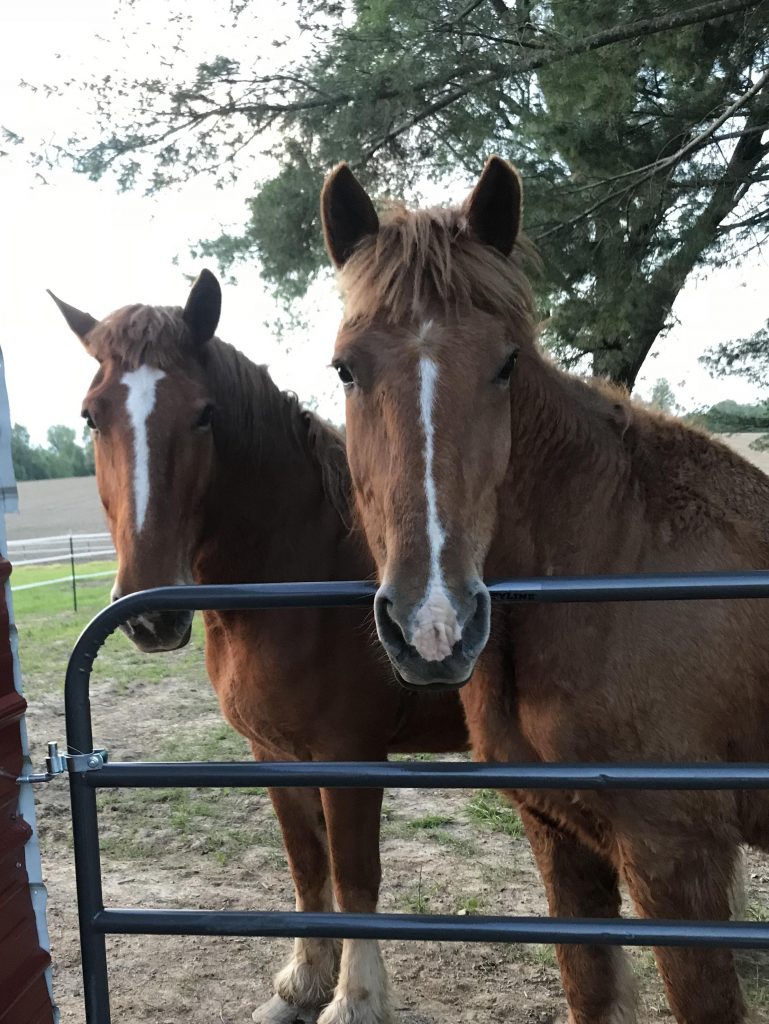 Finally, Wayne came out and wrapped his arm around me and said, “Come on, horse girl, they will be here in the morning.”

That was the most beautiful thing I had heard in a long time.