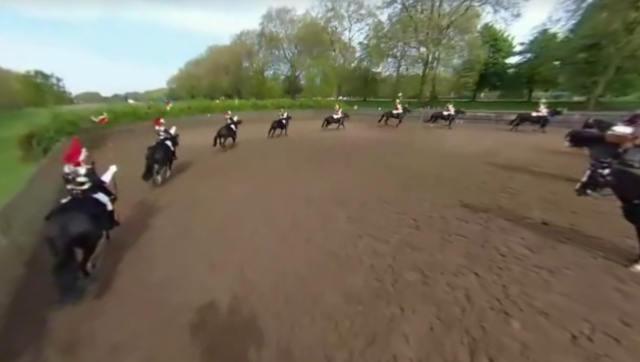 The Household Cavalry Mounted Regiment is the ceremonial half of the entire Household Cavalry unit: the other branch has active front-line combat duty, and most servicemen will serve in both units during their service. The Mounted Regiment is best known for its daily ceremonies at Buckingham Palace’s Horse Guards, and also travels Great Britain with its musical ride.

What you’re watching below is essentially the most famous, highly-trained drill team performance in the world — and thanks to 360-degree cameras, you can watch the performance from every conceivable angle! Want the rider’s-eye forward view? Or maybe you want to see how a particular maneuver looks behind the featured rider, or a closer peek at what they’re doing across the arena, or…

Experience the Musical Ride's first Full Dress Rehearsal of 2018 in immersive 360! This rehearsal gives the Riding Master, and Musical Ride Spurman, an opportunity to identify and iron out any problems prior to the Royal Windsor Horse Show (9 – 13 May 2018). Note: as this is a 360 video, you can either move your phone around, move the phone screen with your finger or, if watching on your computer, click and drag with your mouse to look up, down, and around.

Posted by The Household Cavalry on Monday, May 7, 2018

This video is from the first full dress rehearsal of 2018. In our humble opinion, we think the Household Cavalry is looking pretty good!