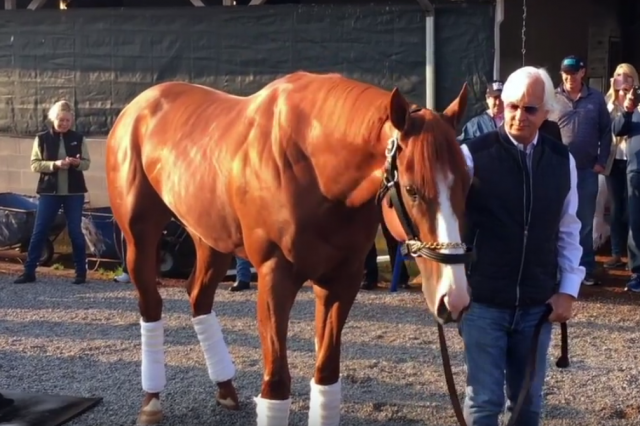 “We as a public should fairly expect transparency at these highest levels and hold these individuals to a high standard. But there’s a trickle-down effect that happens when social media crusaders are proven right — our healthy skepticism can start to veer into unhealthy territory.”

The morning after last Saturday’s Kentucky Derby, winning trainer Bob Baffert did what most winning trainers traditionally do, and brought his undeafeated colt Justify out to share with a small crowd of reporters gathered on the backside. Justify looked bright, alert, curious about the onlookers but every inch a Derby champion. He was out in front of the cameras for barely a minute.

But that one minute was all it took: taking a few visibly sore steps, Justify appeared to be favoring his left hind, at least on the gravel outside of the barn. Baffert quickly handed off the colt to a groom and the Derby winner walked back into the barn, looking more comfortable on the packed dirt walkway.

Immediately, social media erupted: cries arose that Justify was visibly lame on his left hind, with individuals diagnosing everything from a bruised heel to a lower leg tendon injury to a stifle injury to a fracture or worse. Equally assertive in their claims were individuals backing the Baffert camp, confident that a Triple Crown-winning trainer would have the horse’s best interests in mind and knew what he was doing.

The hubbub grew to such a roar that racing media tracked Baffert down later on Sunday to inquire about the colt’s condition. “Scratches,” was Baffert’s response. Scratches, or mud fever, is fairly common in damp conditions and can chronically rage in some horses even in ideal conditions. According to Baffert, Justify suffered from scratches, exacerbated by running in the slop in the Derby, and the flare-up caused his off steps on Sunday morning in front of the cameras. Baffert admitted it may have been a mistake to bring the horse out in front of the public eye.

But the scratches explanation didn’t sit well with the public on social media — not entirely. Some individuals stated that they too had dealt with chronic scratches that could indeed make a horse lame, as the stretching and flexing of scratches-suffering skin can be painful. Others maintained that there was no way that scratches would flare up in a horse presumably receiving the best of care, nor that any level of scratches would make a horse that lame.

And then PETA got involved. People for the Ethical Treatment of Animals (PETA) issued a statement on Monday demanding that the stewards at Churchill Downs to order an immediate veterinary inspection of Justify, as well as a review of his medical records and medications in the past year. “PETA is not confident that Mr. Baffert will reveal the horse’s true condition,” the organization stated.

Enter the Kentucky Horse Racing Commission, which sent equine medical director Dr. Mary Scollay and Dr. Nicholas Smith to inspect Justify. Scollay stated that Justify in fact did not have scratches, but that the colt appeared sound at the walk and jog, as well as in tight circles in both directions. Consultation with Justify’s attending veterinarian Dr. Kevin Dunlavy revealed that a thorough work-up had discovered a minor heel bruise on the left hind which was already clearing up with treatment.

The good news is that Justify is reportedly sound, and will be working towards a start in the Preakness Stakes on May 19th at Pimlico in Maryland. And in a perfect world, this would be enough — the public’s fears for the horse’s well-being would be assuaged and we could all look forward to a good race in a few weeks.

But there’s much more going on here.

I’ll state now for the record that I’m neither defending nor attacking Baffert in this article — I don’t know what circumstances led him to make the statements that he did about the colt’s health. I do know that horses, for their many gifts, talents and relative hardiness, are also giant, fragile babies who are constantly finding new ways to injure themselves and give us all gray hairs.

I’m not going to speculate about whether or not the scratches diagnosis was a blatant lie, a half-truth, a cover-up or accurate. And that’s because I’m not there in person to look at the horse myself. How can I say what’s true and what’s not true? Sure, I can look at that video above and see that this horse was sore — but beyond that, why would I try to diagnose his ailment from my computer screen?

The so-called “keyboard warriors” did land on a correct diagnosis, at least according to the most recent report of a heel bruise. For those horsemen who picked the right condition, I’m sure there’s at least a small sense of pride and victory in having “called it” — we as human beings love being right, after all. But this is a dangerous road to be traveling in the age of social media.

Baffert and his ilk are high-profile horsemen leading high-profile lives with horses who become “our” horses by merit of their fame and abilities, so it’s natural that they need to be careful about what they show the world. We as a public should fairly expect transparency at these highest levels and hold these individuals to a high standard. But there’s a trickle-down effect that happens when social media crusaders are proven right — our healthy skepticism can start to veer into unhealthy territory.

I see this daily in a quick stroll through my newsfeed: “no mean comments about my equitation please” or “please don’t say anything about his hooves; we’re overdue for a trim and my farrier had to reschedule.” Our trigger-happy world of social media justice has made it the new normal that anyone and everyone feels empowered to share their opinion on the glimpse of life we see in a photo or video, whether it’s a rider’s equitation, questionable footing, training we don’t agree with or tack we don’t like.

Let me state again for the record: in this particular case, the social media call-out turned out to be correct. Justify was indeed sore, and did indeed turn out to be suffering from a (minor) injury. But Baffert’s team, the people who work with this horse daily, had already come to this conclusion by the time PETA forced the racing commission to get involved thanks to public outcry.

When there is true cause for concern about a horse’s health or well-being, the court of social media has the right to ask questions and expect transparency. Simultaneously, however, diagnosing a horse’s soundness via a minute-long video sets a dangerous precedent of mistrust in the people who work with a horse every day.

Let us have faith in our fellow horsemen. And let’s leave the diagnosis to the veterinarians.