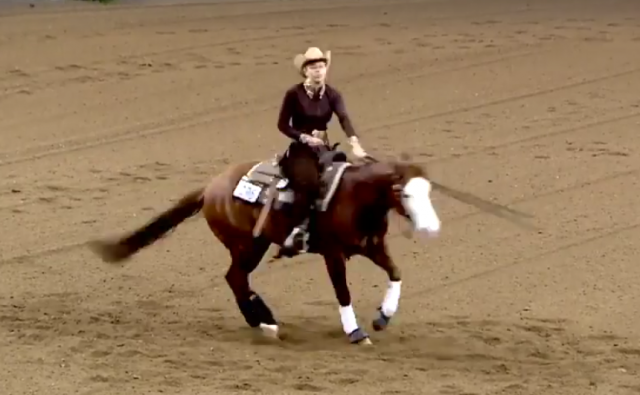 The Intercollegiate Horse Shows Association National Championships took place last week in Harrisburg, Pennsylvania, welcoming hundreds of collegiate riders who had qualified through multiple tiers of competition to reach the finals. Both teams and individuals were after a piece of national glory in hunt seat equitation on the flat and over fences as well as western horsemanship and reining.

In IHSA format, riders draw a horse and catch-ride in the show ring, with no practice or warm-up time. It’s a true test of a rider’s overall horsemanship and ability to adapt to an individual horse’s needs at the moment.

In the NRHA Individual Open Reining, spectators were treated to a particularly exciting class when the top two riders tied score. To truly test these riders and see which one deserved the title of National Champion, the judges requested that the riders swap horses and show again.

Here’s the ultimate winner, Morgan Knerr of University of Findlay, in her second trip:

It took a run-off but Morgan Knerr is the is the winner of the NRHA Individual Open Reining Title at the Intercollegiate Horse Shows Association National Championship!

Not too shabby of a performance for a horse she had never ridden before!