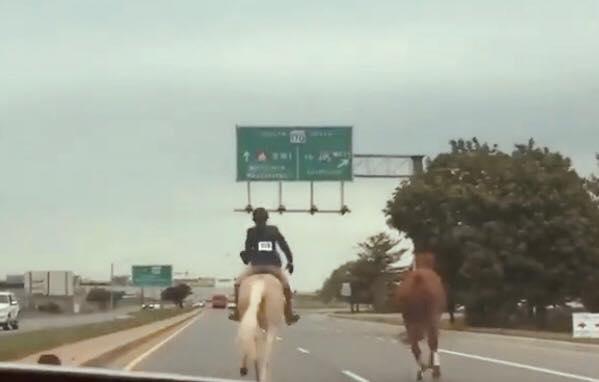 Viral video is circulating of a brave teen rider and her trusty horse taking a wild ride in hot pursuit of a loose Thoroughbred, escaped from a local horse show. Esther Roberts catches up with Caroline Shoults and her horse Tink for the rest of the story.

Some horses rise to such a level of greatness they become household names. For animals in competitions, such as racehorse Secretariat, or showjumper Gem Twist, fame arrives on the heels of a great performance record.

Some, like the legendary Three Bars, achieve fame through their reputation for outstanding genetics and the ability to pass along those qualities to their offspring.

For others, like Ah Chim Hai/Flame-of-the-Morning, better known as Marine Staff Sergeant Reckless, years of brilliance and courage under life-threatening conditions results in well-deserved memorialization and accolades.

And then there is NeverlandsTinkerbell. NeverlandsTinkerbell, “Tink” for short, has become a household name in the span of less than a week, due to her zen-like calmness and endurance-like fortitude during a daring, three-mile chase through some of Maryland’s busiest highways to rescue a runaway.

While Tink’s name arises from the story of Peter Pan, Tink’s own story reads much more like the rags-to-riches fairytale Cinderella.

A partnership is formed

About a year ago, then 15-year-old Caroline Shoults was closing in on achieving every horse-crazy young girl’s dream: a horse of her very own. The youngest of three children, Shoults lives in Maryland, where neither land nor boarding comes cheap. Her father is a police officer.

“I had been looking for a year, because I knew I had to get this right the first time. My dad spoils me, and I appreciate that so much, but I didn’t want to ask him to go through the headaches of buying and selling horses until I found the right one, so I took my time and tried to use all I had learned about riding and horse husbandry in selecting potential horses.”

Shoults began riding and learning about horses in the third grade at the prestigious Garrison Forest School. She later transitioned to the British Riding School at Kilmarnock Farm.

Now sixteen, Shoults still takes regular lessons with Joanne McCallum at the BRS; Shoults credits McCallum with much of her own skill and understanding of classical horsemanship. “She’s an awesome trainer and a super-sweet person.”

Equipped with those years of study and practice, Shoults had settled on a young Morgan horse. “I was literally on Facebook, ready to message the owner, ‘yes, I want to buy your horse,’ when I decided to take one more look at the horses in the Kaufman Kill Pens.

“I hate that there are so many homeless and unwanted horses who go to slaughter and I really wanted to rescue a horse that had no hope for the future. At the time, I had no idea there were kill pens all across the country. New Holland is really close to me, but I didn’t know about that auction then. I had a friend who had rescued one from Kaufman, so that’s where I looked.

“Tink was on the ‘past time’ short list. She had been scheduled to load and ship, but at the last minute, they finished that load with two big draft horses so they had no room for her on that shipment. She was out of time.” 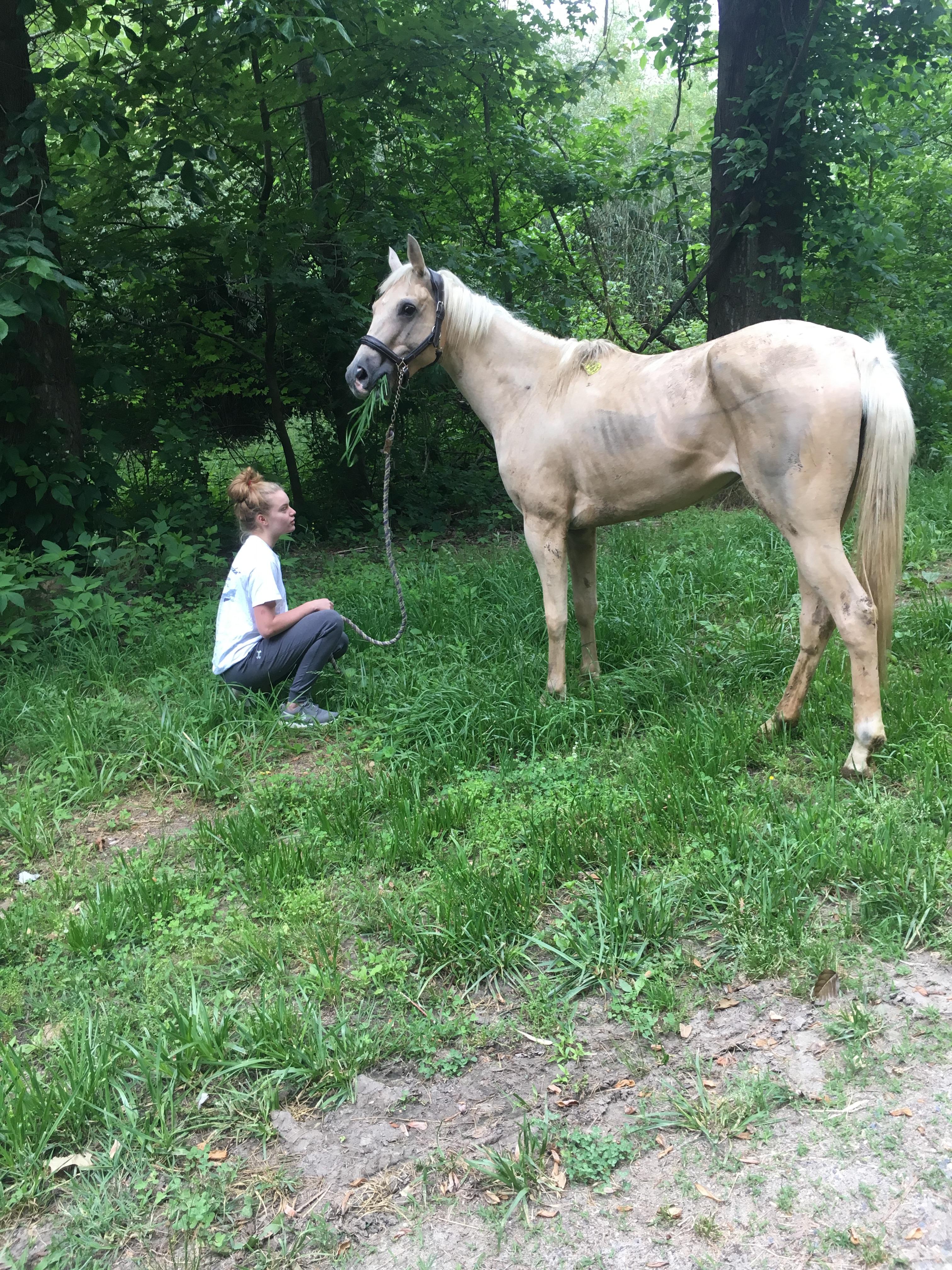 Her father questioned her idea of bringing an unknown “kill pen” horse, whom she had never seen nor tried under saddle, all the way from Texas to Maryland. “I studied her conformation and her eye, based on a couple of photos and a one-minute video they posted of Tink. Somehow, I just knew she was the right horse for me.” Persuaded to trust his daughter’s instincts, Dad Shoults approved the purchase and #343 became “NeverlandsTinkerbell.”

Three-year-old Tink arrived in Maryland on May 21, 2017. She was thin, filthy, anxious and untrusting. “I wasn’t prepared for how skinny she was; thank goodness she was otherwise basically healthy, and she has the best mind!” 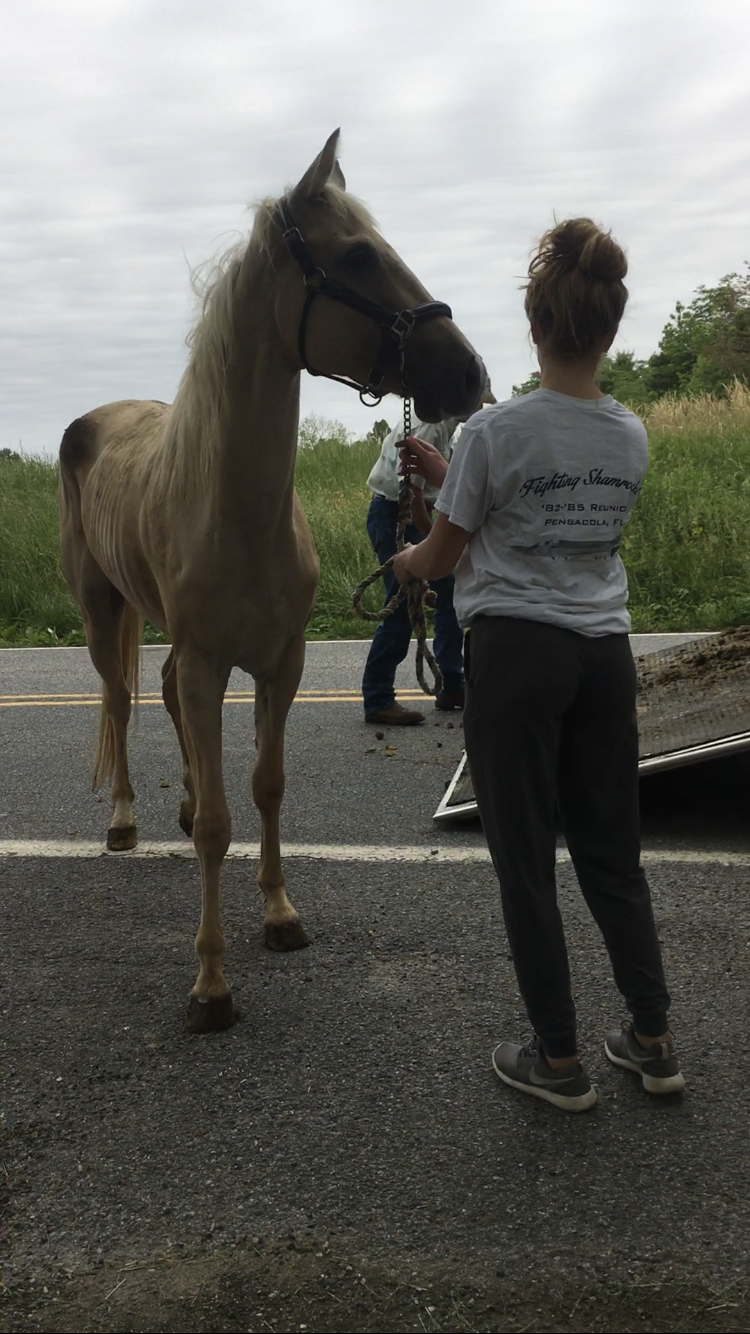 Shoults believes in “training so the horse always has fun.” In six short months, working around the famously erratic “Maryland weather,” Shoults and Tink have done trail rides, learned to jump, and, in Shoults’ words, “solidified our flat work. I’m a huge fan of classical training, because if the flat work is solid, everything else is so much easier for both the horse and rider.” 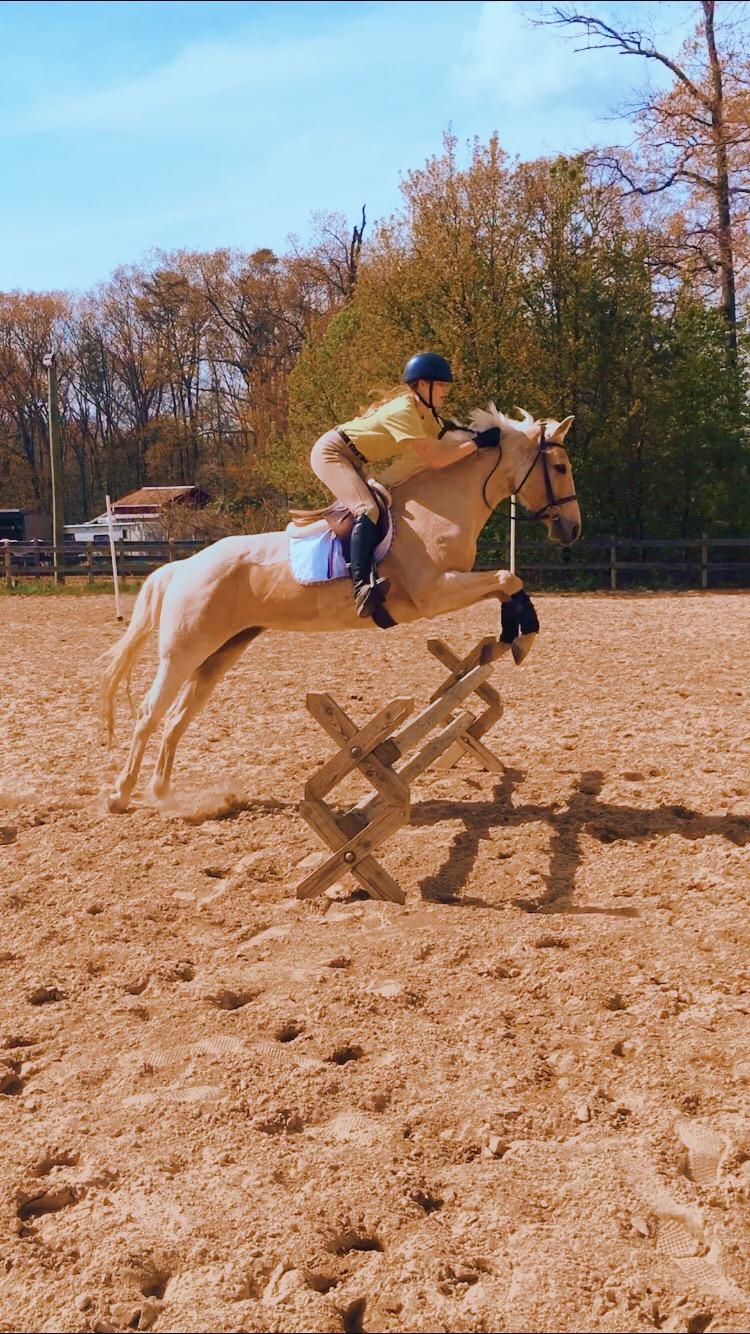 That solid partnership is evident in the dramatic videos that have taken the internet by storm.

“This was our very first show and we were just getting ready to enter our fifth class. I heard the announcer say, ‘loose horse’ and I figured someone would catch it. Then I heard someone gasp and we all watched Ice – the chestnut OTTB with a successful racing record – take off through the main gate at a gallop.”

Ice’s young owner was frantically following her runaway, a broken halter in hand. A man with a halter and lead rope was also running behind Ice.

Shoults’ life philosophy is simple and straightforward: “Do unto others as you would have them do unto you.”

Ice’s owner was sobbing as she stood and watched her horse disappear. “She had tried her best, but she had no chance of catching her ex-racehorse mare.” Shoults was mounted. She rode Tink up to her fellow competitor and said, “I PROMISE to bring your mare safely back to you!” The man, also winded, tossed Shoults his lead rope, and the race was on.

“As I headed out the gate, I thought, ‘My mother is gonna KILL me! I’m never going to hear the end of this!’ but then I got too busy to worry about anything but keeping Ice and Tink and me safe. Fortunately, Ice never went into racing speed. I now know she apparently got stung really badly by wasps, because she broke a non-breakaway halter. But as we went after her, she was running full-out but not in a blind panic — for three miles!”

Tink, who happily jumps logs and other obstacles on trail, “thought the rail road ‘X’ on the road, and the tracks themselves, were obstacles, so we jumped the flat white ‘X’ painted on the road and she jumped a set of railroad tracks. After that, though, she realized her job, locked in on Ice, and seemed to know exactly what she was doing. I trusted her, and she trusted me, and we took care of each other. I talked to us the whole time to keep us both sane!”

The chase took the pair through some of the busiest and most dangerous passages of Maryland’s highway system, including past Baltimore-Washington Airport. “We passed Aviation Boulevard, galloped past BWI, Andover Park, past the middle school, Maryland 170 – just on and on and on! Finally, Ice got on a spot of grass and slowed down. I had hoped she would go down the bank off the highway to a nearby field, but there was some riprap rock down there, so she couldn’t get further off the road.”

“I was afraid Ice might try to run again, so I had no time to think; I just hopped off Tink, dropped her reins, and trusted her to stand still while I went and looped the lead rope around Ice’s neck. Fortunately, someone with a trailer was there very quickly, so we loaded Ice and Tink and all ended well.”

“I was so proud of Tink. She stood like a statue while I got Ice! And she tried so hard the whole three miles! I was not going to push her, but she pushed herself and kept up with Ice the whole time.”

Once safely back at the show grounds, Shoults realized the show’s management had held her class for her, so “I decided to put Tink in the show out of respect for what folks had done by waiting for us. It was Tink’s first 2-foot class and she did really well!” 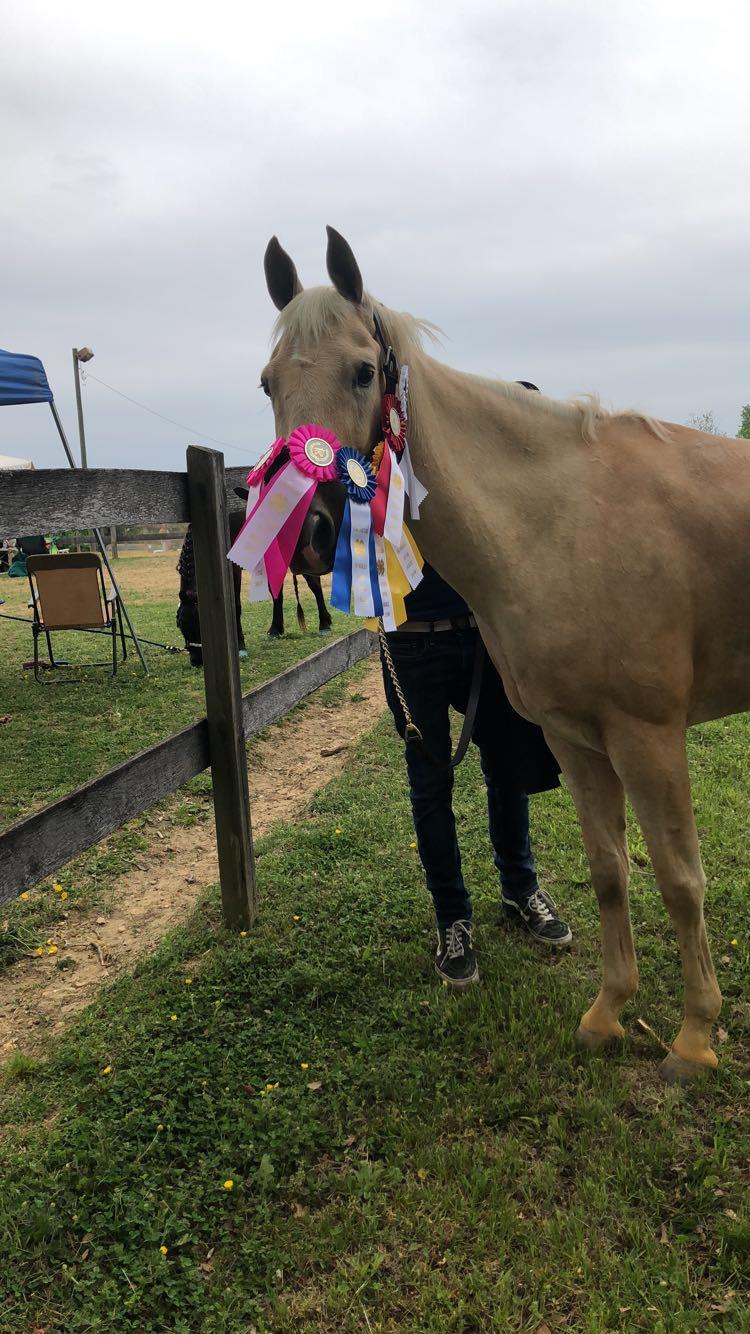 Later that evening, at Triple Turn Farm where Shoults boards Tink, Tink got her hoofs packed and her legs poulticed, just as a precaution. “She’s doing great and seems absolutely fine!”

As farm owner, Heidi Fischer Kern notes, “next time Tink is at a show, she’ll be wondering what happened to the roads and tracks phase!”

Caroline loves eventing and hopes to event Tink. But, like all great horse trainers from Tom Dorrance to George Morris, Caroline Shoults’ primary thought is for the wellbeing of her horse. “What we end up doing really depends on Tink – what she enjoys and what she wants to do. Riding is a privilege, and I’m so grateful to have such an amazing riding partner in Tink!”

Caroline Shoults and NeverlandsTinkerbell. Names to remember, for their amazing performance, partnership, courage, and kindness to a fellow competitor in her time of greatest need. 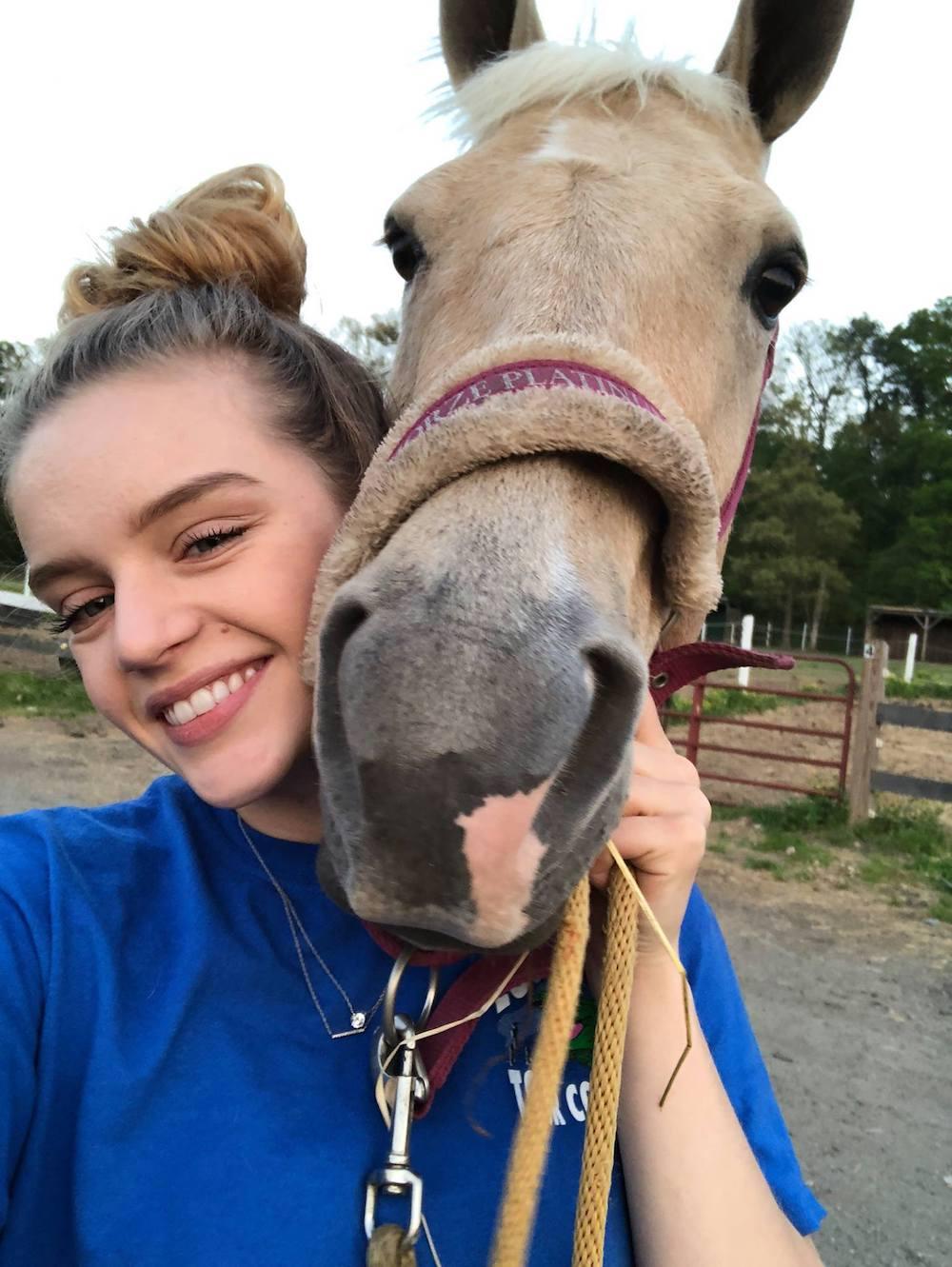