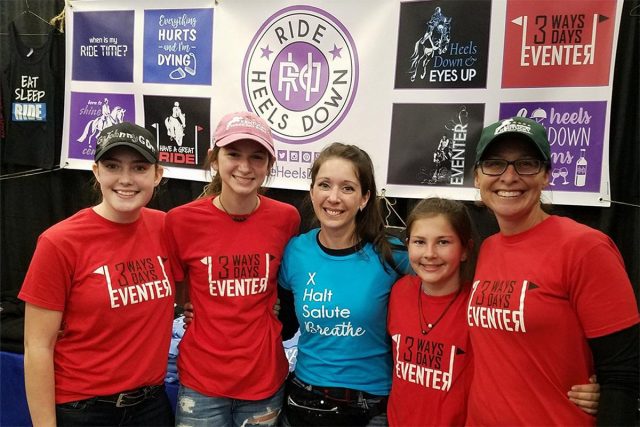 A different point of view…

It takes all facets of the horse industry to make a massive event like Land Rover Kentucky Three-Day Event such an experience. Ainsley Jacobs gives us a glimpse into the event from a vendor’s perspective. 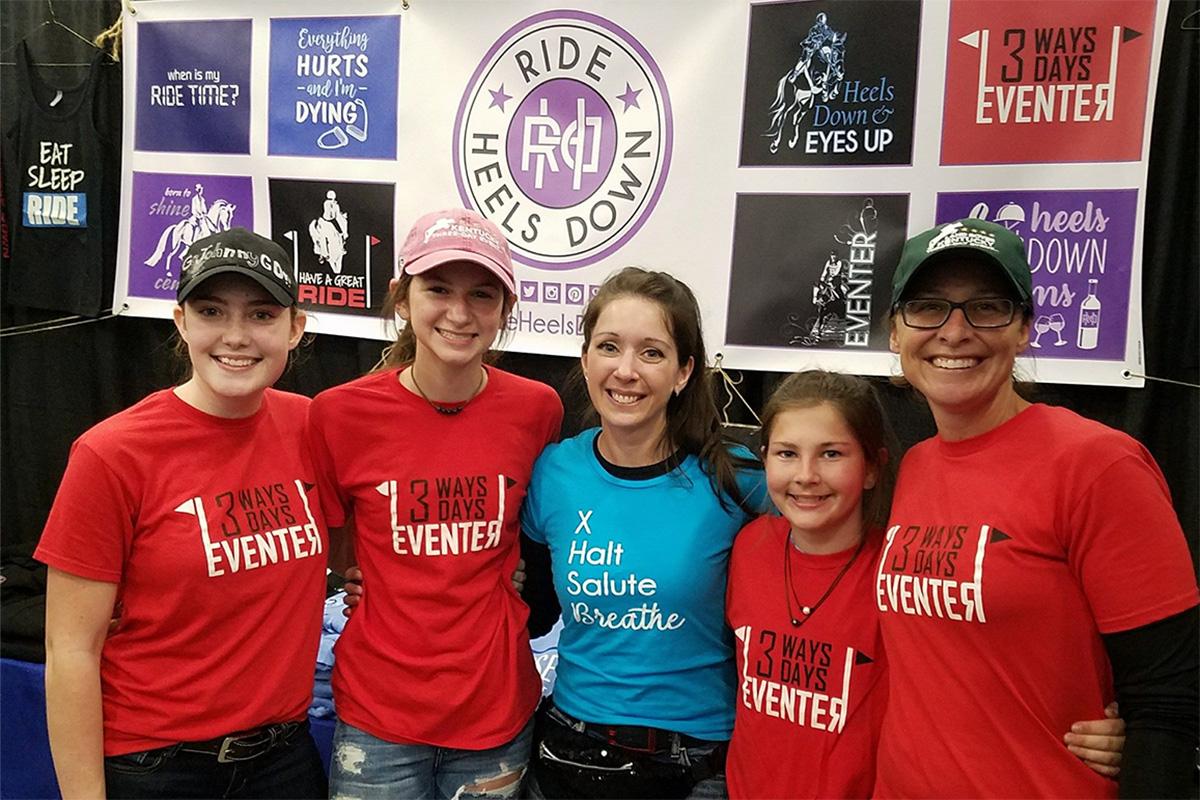 Well, I’m back from another great weekend at the Kentucky Horse Park with Ride Heels Down and although I’m desperately trying to catch up on work from my day job after having been away so long, I wanted to get my thoughts and gratitude out while everything was still fresh in my mind.

First things first, I would like to extend a huge “thank you!” to Land Rover for their sponsorship of the Land Rover Kentucky 3-Day Event. I’ll admit, it took a little getting used to typing the #LRK3DE hash tag and saying “Land Rover” instead of “Rolex,” but we ALL need to return the favor and show our support for Land Rover.

Now on to the fun stuff! Getting ready for the LRK3DE isn’t a quick process. I started preparing about five months prior, securing my booth space, designing new apparel to launch at the event, ordering (and folding) tons of inventory, purchasing supplies, and more. I am fortunate in that I displayed last year for the first time, so I already had most things organized and had a good check list to work from which made it a little easier.

Two of my good friends, though, were both displaying this year for the first time and I did what I could to help them plan and avoid any unexpected hiccups. Because teamwork makes the dream work, right? Amazingly, Mary Campbell and her super cute boutique, Mare Goods, wound up being located right next to Laura Lamb’s incredible travel company, Ireland Equestrian Tours.

When it finally came time to drive six hours form Atlanta to Lexington, my fabulous husband, Erik, and I loaded our diesel van (aptly nicknamed “Van Diesel” – get the joke?) and hit the road. We arrived mid-day on Tuesday and settled in to our hotel to enjoy the calm before the storm. The next day, we headed over to the beautiful park and got to work unloading and unpacking. I had the booth mostly set up around noon, so we broke for a quick lunch before coming back to finish things up.

I awoke on Thursday morning so excited to get started with the first day of the event, but quickly found that I couldn’t talk. Seriously! My voice had mysteriously disappeared and I suddenly sounded like a 75-year-old, three-pack-a-day smoker, although I felt completely fine otherwise. NOT good considering I had four days of nonstop talking ahead of me, but I figured I had no choice but to soldier on. By Friday, all I could manage was a whisper and it was starting to hurt just to get any words out at all. Thankfully, everyone I “talked” to (and I used that term loosely) was super understanding. By Saturday, though, just as mysteriously as it had disappeared, my voice came back! I was SO glad for the timing as the weekend was expected to be even busier. It was so strange! But hey, I’m just glad it wasn’t worse.

Other than the temporary laryngitis, the event itself went off without a hitch. My favorite part, though, wasn’t watching the incredible dressage performances that inspire me to pay my dues on the flat. It wasn’t seeing riders tackle the massive cross country jumps that make my Novice obstacles seem minuscule by comparison. It wasn’t witnessing the horses giving it their all in stadium… it was knowing that I was able to make the weekend memorable for other people.

A few weeks ago, one of my customers-turned-friends, Chandra Bratton, messaged me on Facebook. We started talking and I asked if she and her daughter, Tori, would be attending the event as I knew Tori had her heart set on going. Chandra told me they hadn’t gotten tickets and so they weren’t planning on going. I had a couple extra passes that came with my vendor package, and so I quickly offered them up. Chandra loved the idea, grabbed a hotel, and started scheming a big surprise for Tori who had no idea she would be attending this year after all.

It was wonderful to finally be able to give these two incredible ladies a big hug when they arrived on Friday. Tori was beyond excited to actually be at the LRK3DE, and Chandra had made me a lovely pair of custom Ride Heels Down earrings as a thank you. I have a feeling we will be friends for many years to come!

Similarly, CCI* rider and my friend from Atlanta, Jessie Schwartz, 17, was also attending this year. I had promised her at the 2017 AECs that she would be the star of my next shirt, and that happened when Jessie and her 15.1h horse, Kitaro, were proudly featured in the art on my new “Too Legit to Sit” design that debuted at the LRK3DE. It was SO cool to see Jessie with “her” shirt and introduce her to people who were purchasing one of their own – she even autographed Tori’s! 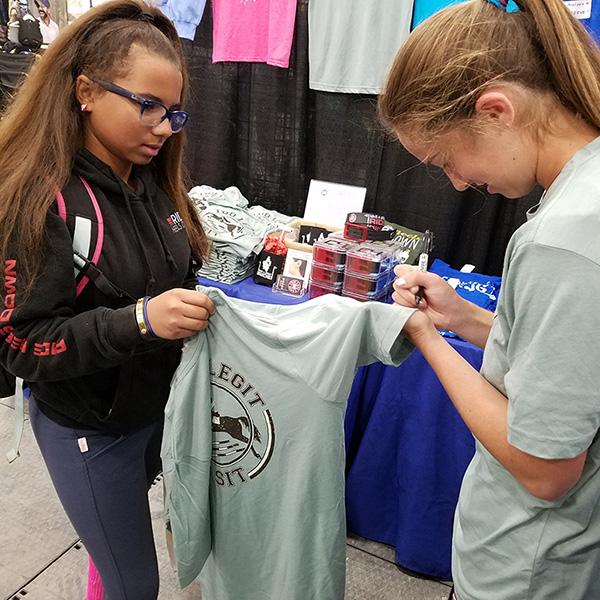 Another fun moment this weekend was when a plus-size rider came into my booth and made a comment about “I bet you don’t have anything in my size.” I responded “of course I do, I love all shapes and sizes from ponies to draft horses.” 🙂 She was shocked that I actually stocked 2X and 3X sizes, and proceeded to buy one of almost everything! I was thrilled to have been able to exceed her expectations, and she left my booth with a huge smile on her face.

Truth be told, it warmed my heart beyond measure to know that small actions on my part had made big impacts in other peoples’ lives. If I can do something to make someone else’s day a little bit better, then I’m going to do it. Life is short, the world needs more kindness and more smiles.

Despite sales being down slightly over last year, it was still a great event. As always, I had a ton of fun seeing my friends and meeting new people, and I was so proud of Mary and Laura for being such superstars at their first major debuts. I can’t say it enough – THANK YOU to my amazing “family of friends” and everyone else who helped make this year’s #LRK3DE a huge success. I’ll see you in 2019!