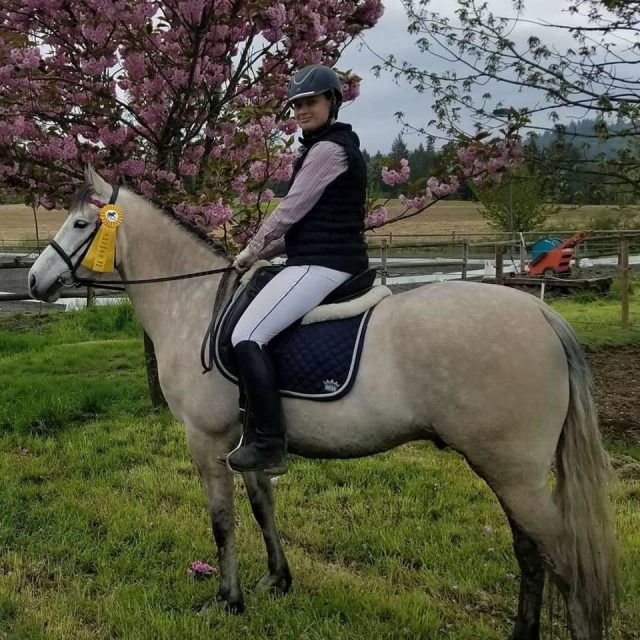 “The speed at which others are traveling shouldn’t dictate my pace.” Whether she’s on the long-distance running trail or in the dressage arena, Biz Stamm has learned that “slow and steady” can truly win the race.

One of these days I’ll run out of comparisons between long distance running and riding, but until then, you’ll have to humor me.

A few weeks I ran one of my favorite races out in Sisters, Oregon. It’s a 20 mile track through some of the most beautiful country I’ve ever seen, over technical terrain that forces you to focus on every single footfall. I have mentioned in the past that I am not a naturally gifted rider, and the same goes for my running ability. After years of work, and endless hours of training, I’ve managed to become solidly average.

This year at the start of the race, I began at my normal, comfortable pace of around 10 minutes/mile. For the first 10 miles I was passed by dozens of faster runners. I held steady, resisting the urge to try and keep up with the other runners. For the next several miles, I found myself running mostly alone with large groups of the pack either in front of or behind me.

Then around mile 14 something interesting began to happen: I started to pass other runners. I hadn’t sped up at all, but by continuing to hold steady I was able to catch up with and pass many of the same runners who had passed me earlier on. By mile 20, I had moved up significantly, putting me in the top 50% of women and nearly the top 50% of runners overall. It would seem that many of the runners who had put the pedal to the metal early on had run out of steam in the second half of the race. 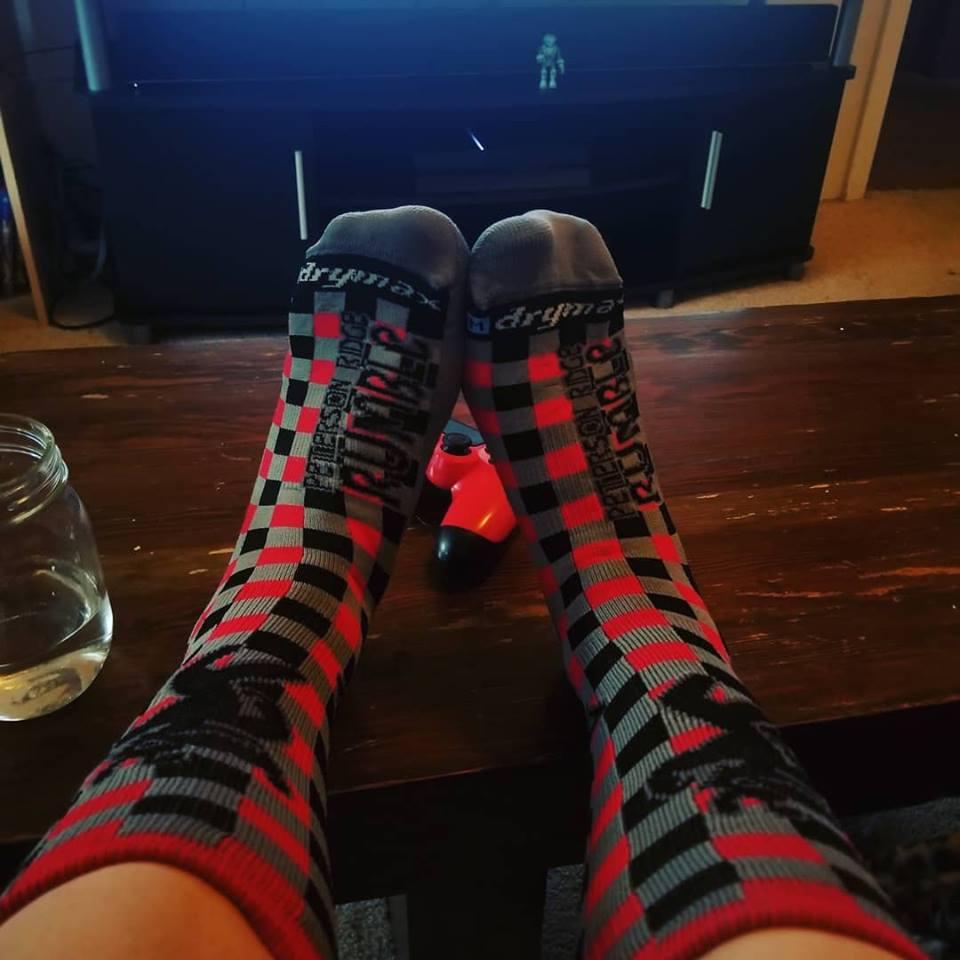 The socks I received for finishing the 20 mile race. Photo by Biz Stamm.

Getting caught up in the adrenaline in the pursuit of a competitive goal is an easy thing to do. I’ve certainly done it. And sure.  There are plenty of runners with innately more athletic ability who can smoke me from beginning to end maintaining a blistering fast pace the entire way, but if I’m continually trying to keep up with them instead of finding my pace, I’ll burn out before the race is over. I certainly won’t be able to perform to the best of my ability.

So how does this relate to riding? Well, this past weekend I was at a league dressage show with my little Kiger mustang, DB’s Alpha Helix. He had shown first level a little last year, and I was feeling a bit frustrated that despite all of our hard work over the winter, he wasn’t quite ready to move up to second level.

Watching other riders fly up through levels, it’s easy to feel the pressure to progress more quickly in order to keep pace, but before the frustration really got to me, I started to think back on that race. I started to think about how pushing too hard too soon would have killed me. I started thinking about how a realistic awareness of my own abilities allowed me to be successful in the long run (oh yeah, that pun was totally intended).

Maybe spending a year and a half at first level is Helix’s equivalent to my 10 minute/mile. Maybe that’s his steady, comfortable pace. Just like me, he isn’t gifted with tons of natural talent. If I push too hard too soon, I risk burning him out “before the race is over.” If I let him hold steady at his pace, while he may not ever be able to keep with the horses who are innately more gifted, it will give him the opportunity to perform at his very best. 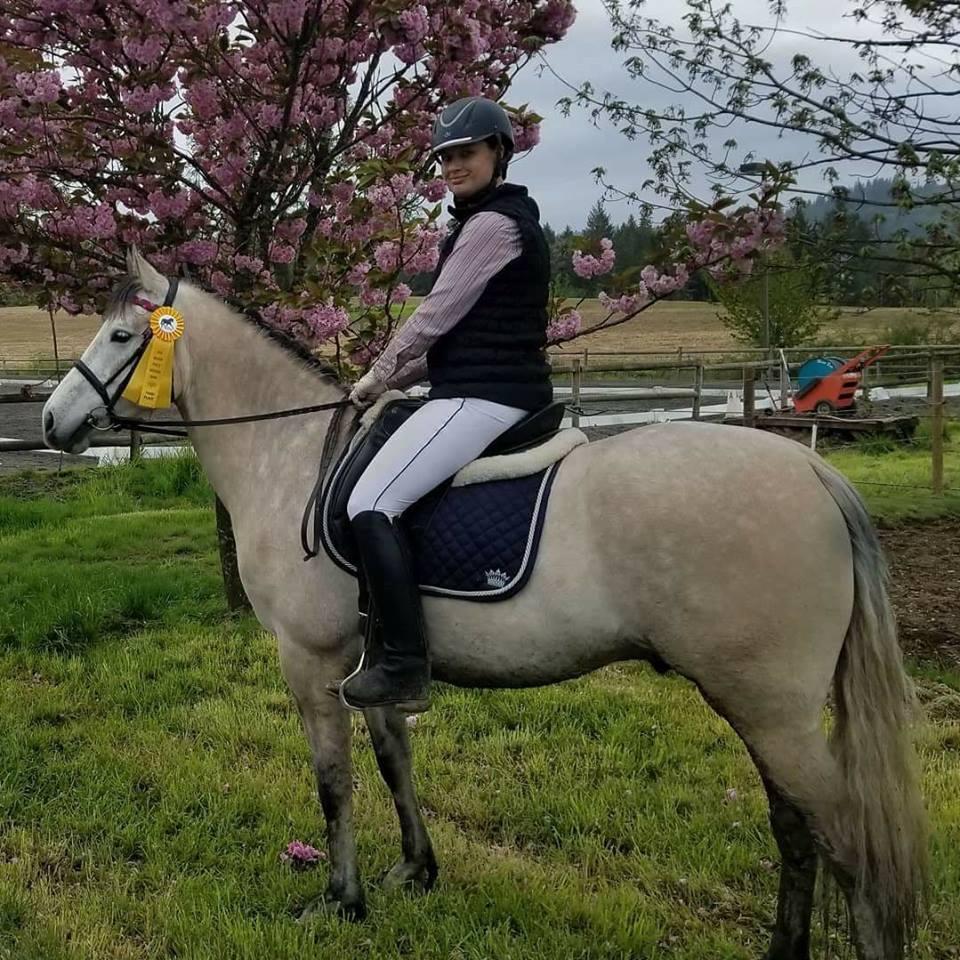 Helix and I show off our ribbon at the ODS Beaver Piaffe. Photo by Biz Stamm.

And when it comes down to it, I don’t sign up for races or dressage shows because I have any hopes of winning. Nor do I have a need to win, for that matter. I sign up for these things because they give me incentive to partake in the process that is slowly improving myself over time. I just need a reminder every once in awhile that as I race down this road that is life, the speed at which others are traveling shouldn’t dictate my pace. My pace, the pace that will allow me to live my very best life, is determined by the multitude of factors that make me who I am.

Go riding! (and maybe running, too!)