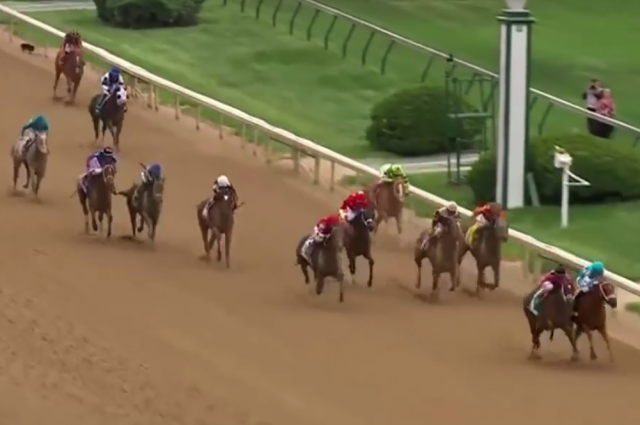 A class field of 14 fillies lined up for the 2018 Kentucky Oaks, but Monomoy Girl reigned supreme. Catch the recap and replay here!

Much ado has been made over the deep field in tomorrow’s Kentucky Derby, but the same could be said of this afternoon’s Kentucky Oaks, the $1 million Grade 1 race for three-year-old fillies. Fourteen accomplished fillies went to post at 6:12 PM with Midnight Bisou the favorite, winner of the Santa Anita Oaks, Monomoy Girl the second choice and most recently the winner of the Ashland Stakes.

Take Charge Paula took an early lead as Midnight Bisou got caught between horses and forced back at the start. Sassy Sienna took the rail, forcing Monomoy Girl and Florent Geroux three-wide into the first turn. Monomoy Girl made her move in the final turn, cruising easily into the lead in just a few strides.

But her lead wouldn’t go uncontested: at the top of the stretch, Wonder Gadot and John Velazquez engaged and the pair of fillies drove for the wire together in a thrilling duel. Monomoy Girl bumped Wonder Gadot several times in the stretch drive but got the advantage at the wire with her head out in front.

Velazquez filed a jockey’s objection over the bumping, stating “This sort of thing happens all the time but when you get hit that much you’d better put up an inquiry to protect your owners.” The objection was dismissed and the order of finish stood, with Monomoy Girl taking her second straight Grade 1 win for trainer Brad Cox and owners Michael Dubb, Monomoy Stables, The Elkstone Group and Bethlehem Stables.

Midnight Bisou fought her way up the field to grab third, followed by Eskimo Kisses and Chocolate Martini. The rest of the order of finish was