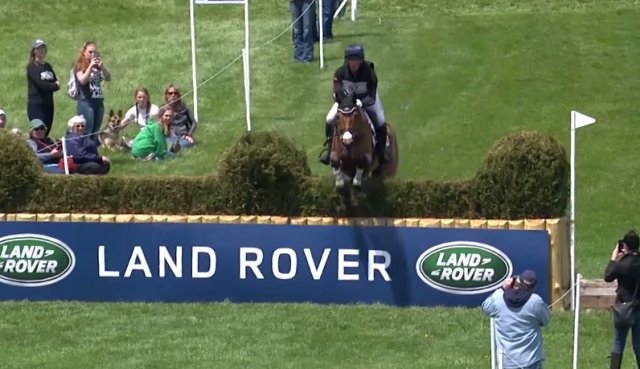 Great Britain’s Oliver Townend and Cooley Master Class are your 2017 Land Rover Kentucky Three-Day Event winners! Watch their cross-country round here, which was indeed a master class of a performance.

While the spotlight may have been fixed on Germany’s Michael Jung and super-mare fischerRocana FST for most of the weekend, the ultimate winning combination was lurking within striking distance the whole time: Oliver Townend and Cooley Master Class clinched the win with a clear stadium round on Sunday after strong dressage and cross-country performances. Even more impressive, this was Cooley Master Class’s first four-star event. Way to set the bar high, buddy.

After dressage, Townend and “Coolio” held fifth with a 28.7 (Townend’s second horse MHS King Joules took eighth with a 31.3). Impressively, Townend brought both horses home inside optimum time on cross-country day, the only rider in the entire field to do so.

Check out the video as Cooley Master Class puts on a master class in cross-country: this horse’s efficiency in movement makes him look like he’s not even trying, despite coming home three seconds ahead of time.

“This is an absolute long term dream of mine and I just want to think every single person here for sharing that dream day with me.” – Oliver Townend ????????Enjoy your 2018 Land Rover Kentucky Three-Day Event Champions: Oliver Townend (Official) and Cooley Master Class on cross-country. Watch all of #LRK3DE on-demand on USEF Network: https://www.usef.org/network/coverage/2018LRK3DE/

When Jung and fischerRocana dropped a rail on Sunday, the door was left wide-open for Townend and Coolio to win with a clear round. Townend has produced this horse since he was four years old, making victory all the sweeter.

Oliver Townend now focuses his attention on Badminton, which is taking place right now in Great Britain. Thanks to winning the Burghley 4* last fall prior to this victory in Kentucky, Townend is poised to potentially become the third rider in history to capture the Rolex Grand Slam of Eventing should he win Badminton this weekend. Our sister site Eventing Nation will have all the in-depth coverage!