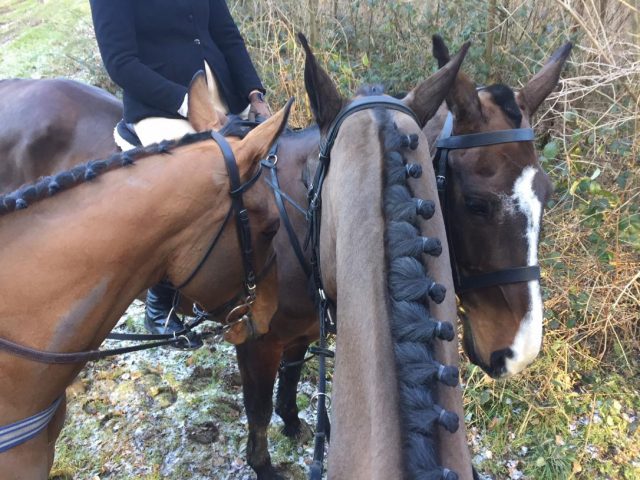 Carla LaFleur, longtime Nation Media friend and former Horse Nation editor, brings us along for her recent adventure fox hunting abroad in England — long regarded as a bucket list destination for a proper day in the field.

Carla LaFleur, a longtime Nation Media friend and former Horse Nation editor, is an avid foxhunter, and she recently ticked a proper British hunting excursion off her bucket list! She kindly shares her story with us — read more of her adventures on her blog The Frugal Foxhunter.

So everyone I spoke to about hunting in England was right. The hirelings were rockstars, and I really didn’t need any special preparation. No hedges – but there were some other twists and turns that made a slow day of hunting unforgettable.

The morning started like any other hunting morning – an early alarm, and creeping around in the dark trying not to wake my husband as I got dressed. I triple-checked that I had packed everything. Hairnet, foot warmers, gloves: check. I had some breakfast, fired up my phone’s global plan, and grabbed my travel health insurance papers. I hoped I wouldn’t have to use it but you never know!

Anyone who talked to me in the two weeks leading up to this trip could tell you in detail all of the anxiety I had about travel logistics, making my connections and getting to the fixture on time. It was honestly my biggest worry, more so than hunting a new horse, since Plantation Hirelings had such stellar reviews. So when I arrived at Alton station well ahead of time with no mishaps, I felt like the rest of the day was just gravy. When my hosts picked me up, I sang the praises of the U.K. public transit for nearly the entire ride to the barn. It just WORKS. Coming from D.C., the land of single-tracking and 20+ minutes between trains, it seems miraculous.

My hireling was a warmblood called Harley –  also known as “The King.” You can see why.

After I helped tack him up, we had a long trailer (lorry) ride to the fixture that gave me a chance to get to know my hosts. More similarities than differences between U.S. and U.K foxhunters. Cursing at stupid drivers, sharing the hunt gossip, a faithful dog curled at our feet. “Look at that hill! Wonder if we can ask the farmer to use his field for galloping.” Foxhunters truly are a breed of their own and recognizable around the world.

Of course, the big difference is that in England, live foxhunting has been illegal since 2004. Drag hunting is fine (and this is what the hunt clubs do now to adhere to the law) but it is an extremely divisive issue. City people don’t get it, and country people resent the urban influence on something they don’t understand. I made the mistake of mentioning that I had foxhunted to ONE city person on my trip. From the look on his face, you would think I had thrown his child in front of a bus. My hosts were amazed to hear that I have never encountered a hunt saboteur. In the U.S., the reaction to “I’m a foxhunter,” is usually more like, “Huh, people still do that?” or “Oh, my brother hunts deer,”  not “You’re a murderous animal abuser.”

As we talked about it I could see the conundrum. It’s hard to understand foxhunting until you do it, meet the people and see that they actually care deeply about both tame and wild animals, and work to protect both for generations. But even if you ride, foxhunting can be intimidating to break into – and why would you bother trying, if you’re convinced everyone who does it is a monster?

I don’t have the answer to that, but I do know that our lively conversation helped to distract me. I was a bit nervous after I heard Harley slipped and fell in the mud hunting the day before. Soon enough we arrived at the tiny (by American standards) parking area  at the end of a long driveway. Standing there were my fellow hireling riders who had driven from London–one of whom, to my delight, happened to be Kat Brown, who recommended the Hursley Hambledon to me in the first place!

Just like at home, my nerves melted away when I swung into the saddle. I quickly realized Harley was 17 hands of class. He responded to the slightest seat adjustment, went round, stood at checks, lovely gaits, everything. His one fault was that he wanted to be glued to his stablemates all day – but hey, honestly it was an excuse to make friends. “Hi, how are you? I see our horses are shamelessly making out with each other.”

The fixture was made up of several wide, manicured interconnecting paths through the woods, with tall bare tree trunks allowing an easy view of the hounds and huntsman working. I felt like I was in the Hundred Acre Wood from Winnie the Pooh.

Unfortunately, the weather conditions were challenging. We had three types of footing depending on where the sun was shining: frozen solid, greasy, and sloppy. Winter, spring and fall, all in one day!

(A side note: Several times throughout the day, I saw weird little creatures scurry across the trail in the distance. These were muntjacs – an invasive species of tiny deer the size of a Border Collie. Who knew I would discover an entirely new species on my foxhunting trip? I was fascinated by them.)

Most of the day, the pace was slow, with the field watching the hounds working the line in the woods, and taking advantage of the ample opportunities to share flasks. When we did move from covert to covert, I could tell the field master was doing her best to keep a safe pace given the ground conditions.

Until the hounds cut across a big open field.

The riders bushwacked through the woods to catch up with the field master, who was already halfway across the fallow field. Branches and brambles everywhere – at a certain point it just was easier to duck down on my horse’s neck and grab the martingale strap than try to push away the trees. As we approached the open field, I sat up to look where I was going, and THWACK – a solid branch to the face. No time to worry about it. I bridged my reins and crouched in two-point for a gallop. I was not sure how my horse would react to the first run of the day.

He surged with a dramatic first step – hooo boy, I thought, bringing my shoulders back – then settled into a lovely, rocking-horse canter. That’s why they call him the King! I thought, and scratched his withers appreciatively.

I felt my chin when we met with the rest of the field. It hurt, but no blood.

I texted about 1000 pictures to my husband as I boarded the train home.

“Quiet day. Fabulous horse. Headed to train station. Be back in about 2 hrs.”

We made arrangements to meet in the city for bao, and I eased back into my seat, cheeks flushed and the skin on my chin raw – completely content. I had a responsibly irresponsible adventure, riding a strange horse in a strange land in awful conditions (but at a reasonable pace, and with travel health insurance, which made it OK of course). I managed to make friends and come home in one piece. AND the train was, again, wonderful.

What tied the whole day together with a nice, neat bow was when I arrived at the Oxford Circus station. I ascended the escalator to street level and heard people yelling. “FUR IS MURDER!” “Madam, do NOT go in that store if you care at ALL about animals!”

It was a horde of PETA protestors greeting me upon my return to the city. About 20 people were rallying outside a store that sold fur. One woman offered me a flyer, and I took it, chuckling.

She had no idea what I had just done that day. And I don’t think she would ever understand.

PS – For those who are wondering “how in the world can hunting abroad be frugal?!” It’s not, but it is certainly more doable when you can tag along to your husband’s business trip. Hirelings are expensive anywhere you go, and in my research I found price ranges to be anywhere from 150 pounds to 245 pounds (~$206 to $338). I found one in the middle of that range but honestly I was more swayed by good reviews and safety. Cap fees range from about 70 pounds to 100 pounds ($100 to $137), though I was able to take advantage of half price for HH newbies ($50). The train was affordable, compared to the U.S. at 29 pounds ($40) round trip. I also tipped my hireling provider. All told, the day cost about $400.