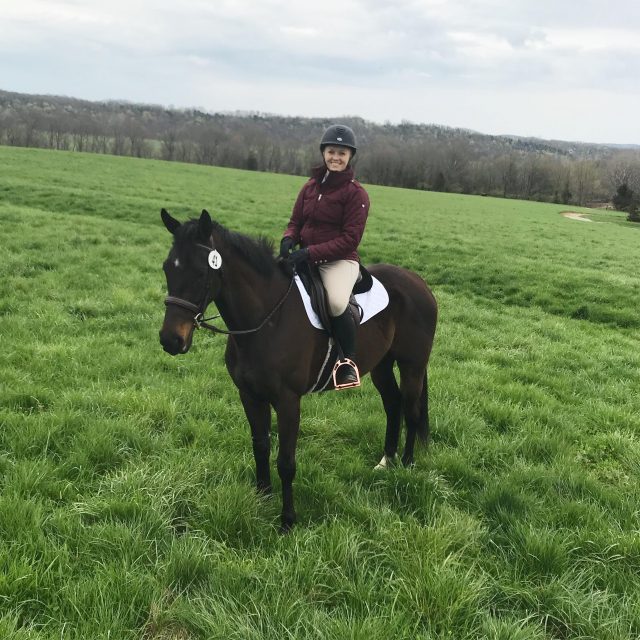 Things have been slow and steady in Flash’s world here lately, but it was finally time to put all of our hard work to the test. After several weeks of schooling small courses at home, I decided Flash was ready for his first off-property experience. And in true Meagan fashion, why not go big and fill the weekend with a ton of first-time experiences? I arranged to attend a Brody Robertson clinic on Friday and Saturday, followed by the host stable’s annual Eventing Derby on Sunday to see how Flash would handle a new environment.

So we trailered up for the first time, for Flash’s first off property experience at his first ever clinic where he would be jumping a course for the first time in an open field. Our weekend would conclude with both us competing in our first ever eventing derby and my first time back riding in the field that had given me my George Morris scar.

My trainer and I hauled in with our two green OTTBs unsure of what the weekend would bring us. Flash immediately made it known that he did NOT approve of being tied to the trailer, which is a new experience for me. I have never had a horse who was so quick to pull back, but I have plans to put in a “patience pole” at home to help him acclimate to standing tied. I worked around his questionable behavior at the trailer all weekend as best as I could and as annoying as it was, it was his only vice so I can’t complain.

Since Flash is normally a chill dude, I was surprised after an hour of light hacking in the field that Flash got himself worked up when Brody asked us to trot and canter. Thankfully, he seemed to settle in as the clinic grew on and I stayed patient despite his desires to gallop off into the sunset. 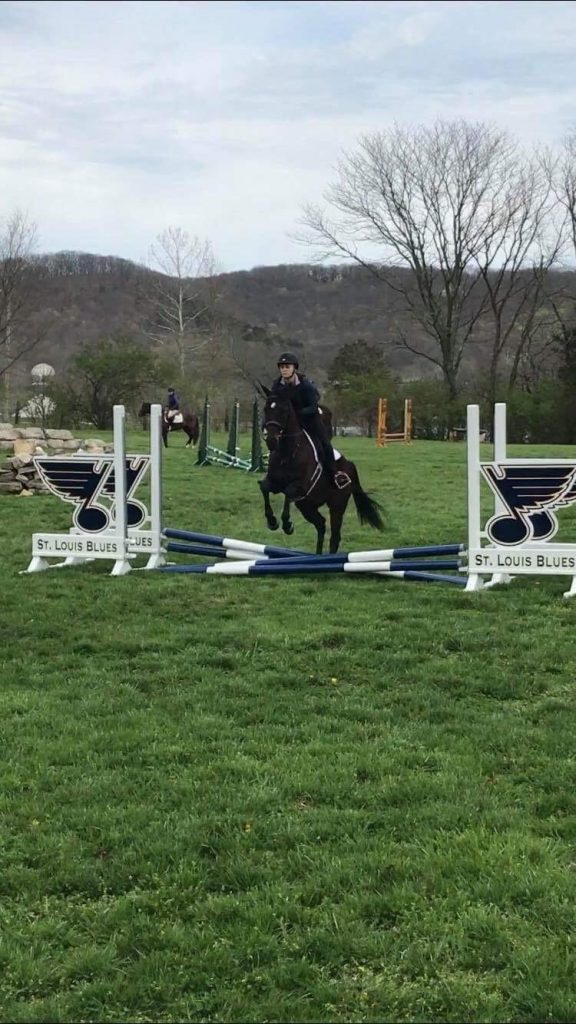 By the time we started trotting over the crossrails, Flash was back in the zone. He loves to jump and happily cantered away after each fence, stopping on a straight line with only a little fussing at first. As we added in more lines, he seemed to be thoroughly enjoying himself and I was very proud of how brave he was.

Facing a downhill slope, Flash wasn’t sure how he felt about this new fence in particular and decided he would rather go right, then left, and then stop abruptly. I wondered how Brody might react, but he was very encouraging about the situation and had me pet Flash in front of the fence to reduce his worry before turning to come to it again. Once he had conquered the scary fence, we did the course another time and Brody had us call it a day.

“You can’t get greedy with the green horses,” he explained to Cassie and me. He encouraged us to keep the horse in mind in our retraining process and allow the horse to end on a good note, rather than pushing them to move on to another task after they have tackled one thing with ease.

Again on day two, Flash was not content tied to the trailer. At home he lives in a field with his best friend Philip, and it was apparent by the blood-curdling squeals he let out every five minutes that he was missing his buddy. I decided that lunging probably wouldn’t be a bad idea. Brody’s wife/my friend Jen coached me on the right way to lunge these young OTTBs to help them settle into new environments.

I let Flash trot around casually until I noticed he began to drop his head and lick his lips. He even gave a sigh now and then and I decided that he was ready to begin work for the day. I tacked up 30 minutes early to give us time to hack around the field and watch the other group go around before it was our turn to tackle the clinic. 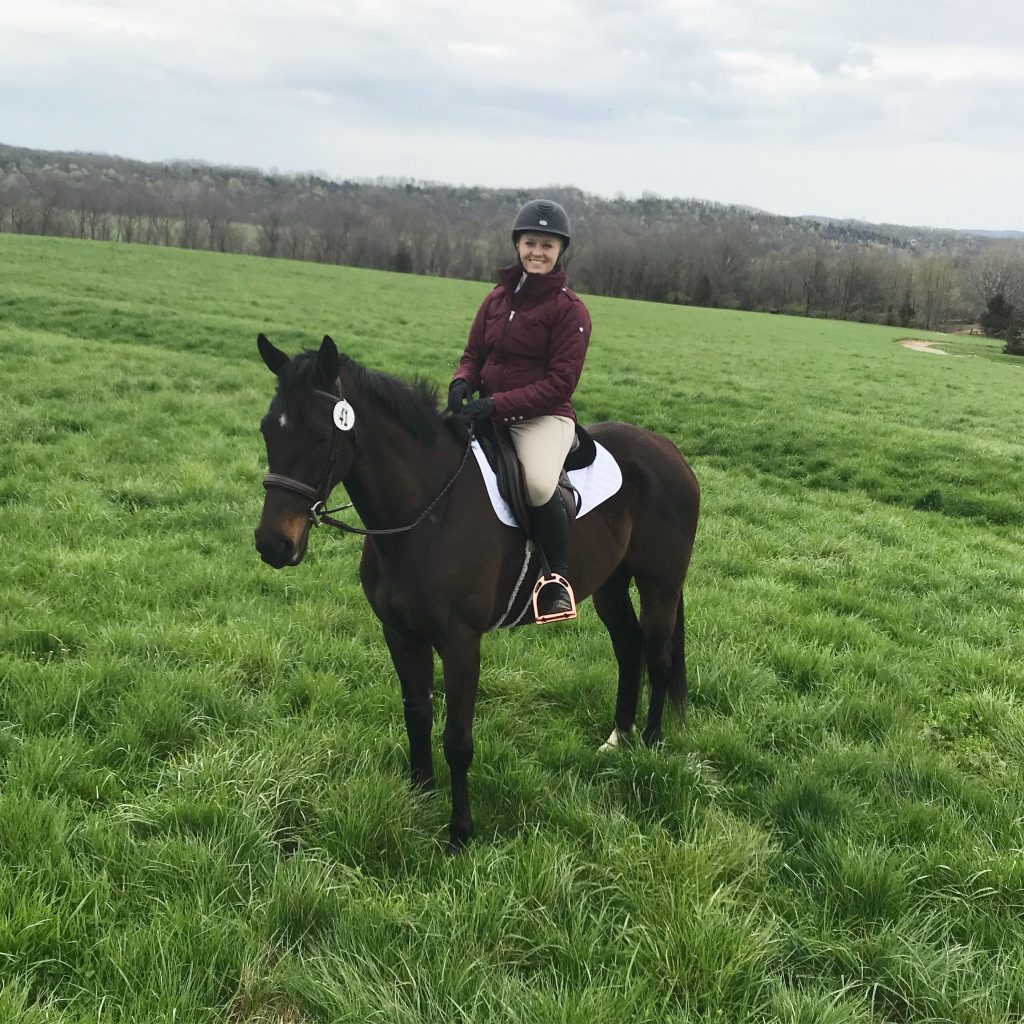 I decided to get on extra early each day to allow Flash some time to hack around and settle in. Photo by Cassie Zimmerman

Flash was even better on day two. He was calm and collected, cantering around on a loose rein and happy to be working. We flatted for an extended amount of time with Brody encouraging us to focus on a jump beside us and evaluate our pace as we approached it.

“Is that a suitable canter for that fence?” he would ask and we would adjust as needed to prepare for the imaginary fence ahead. “You can’t collect what you don’t have,” he shared. “You have to go somewhere.” The exercise was wonderful to test Flash’s ability to adjust mid-course.

We began popping over fences and again, Flash was worried about our favorite Christmas tree jump, but we overcame our worries and ended on a positive note. 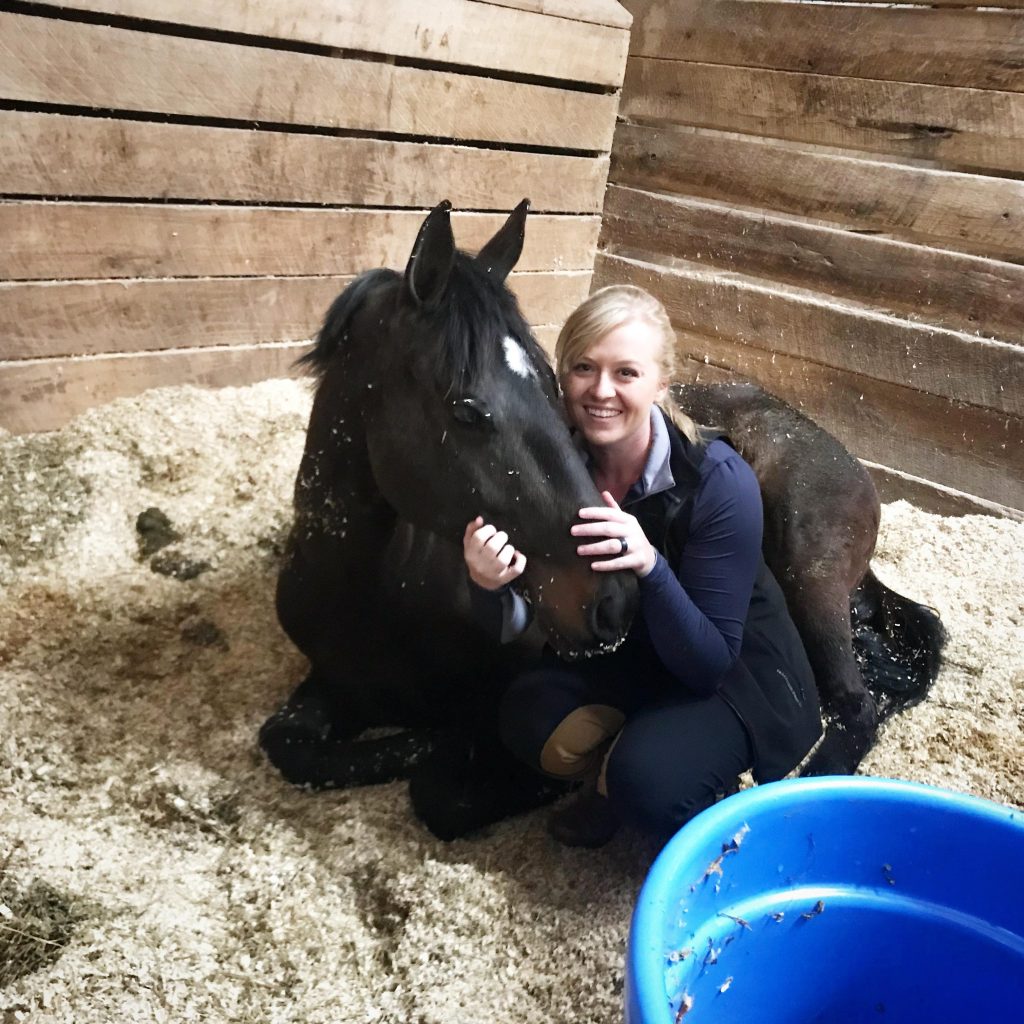 Now, I am not an eventer, but I was game to give this a shot. I had spent weeks memorizing my Intro Dressage test and after an hour of light hacking I felt ready to put on my fancy dancing shoes.

Flash had other ideas.

Mid-test he decided that he wanted to show the judge how high he could stick his nose in the air. I persevered, encouraging him to move forward and focus on the task at hand but Flash just wasn’t feeling it. Somehow, the judge still managed to find something positive about our test and wrote down, “very capable pair,” on our scoresheet so who knows? Maybe Flash will be a fancy horse dancer one day.

Then it was on to jumping. Our course was very inviting and a wonderful test of everything we had worked on over the weekend. It included a series of little Xs dotted across the jump field, followed by the option to trot into the water and up and out of the bank after the last fence just for fun. My plan was to trot into the first fence and then go from there. If we cantered off nicely, super. If we needed to trot again, not a problem. We entered the in-gate, Brody gave me the thumbs up and we were off. 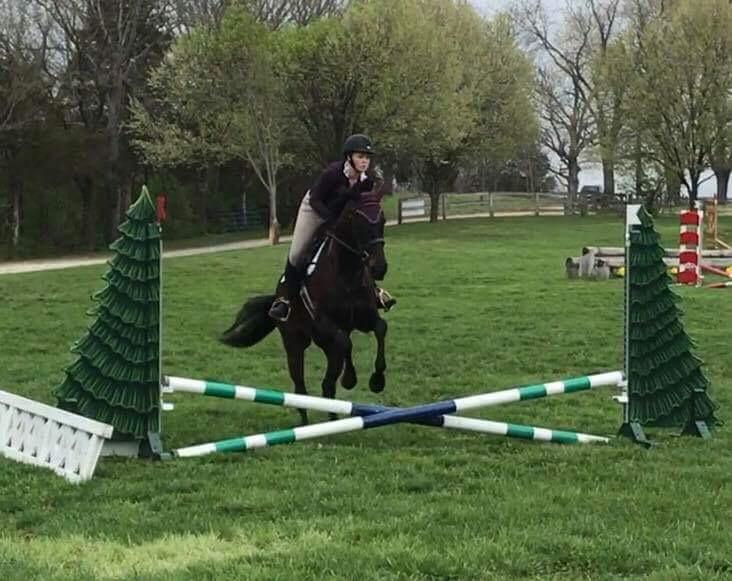 Despite all of our hiccups throughout the clinic, Flash was phenomenal. We poked our way around the course at baby horse speed and I found myself grinning from ear to ear after the last fence. A bold streak hit me and I steered Flash towards the water and to my surprise, he trotted right in and popped out of the bank without a care despite having never seen a bank before in his life!

“Meagan, why don’t you do it again?” Brody called. Cassie and I were the last ones of the day and Brody was so encouraging of our green horses. We made our way back to the in gate and completed the course a second time, sans water complex. Again, Flash was brilliant and bold, almost too much so! I ended the course giggling and squealing, “too fast, Flash,” over the last fence.

It may not have been the Grand Prix and it may not have been perfect, but he’s still the winner in my eyes ❤️ now he just needs to spend some time tied to the patience pole and get over his whole issue about being tied ???? #ottb #ottbsofinstagram #thoroughbred #thoroughbredsofinstagram #retiredracehorse #equestrian #showjumper #showjumping #adultamateur #adultammystrong #flashbackjustice #retiredracehorseproject2018

I had so many expectations of this retraining process and had you asked me last October where we would be at this point in our training, I would’ve answered that we would have competed at several local shows in the 2’ division. Here I am, way behind on that goal, and I am content. Taking it easy has been the best thing for Flash and myself.

Jen summed it up best at the end of the day Sunday, “I feel like your horse became a man this weekend.” Baby Flash is growing up!