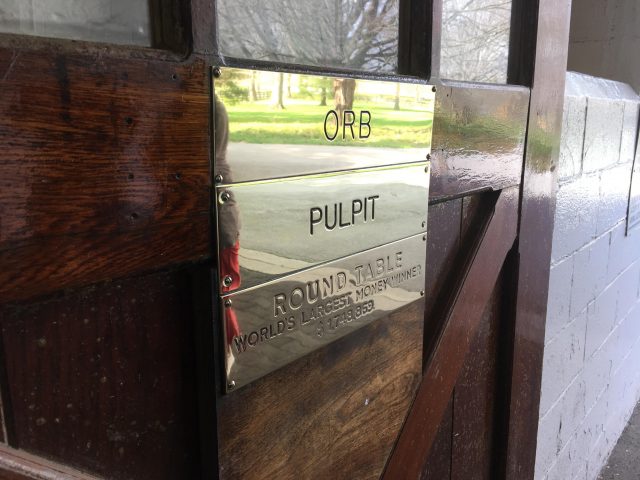 From historic farms to glamorous operations to retirement homes, Kristen Kovatch saw a little bit of everything on a recent trip to Lexington, Kentucky. In Part I of her trip notes, she visits Claiborne Farm, home to legends. 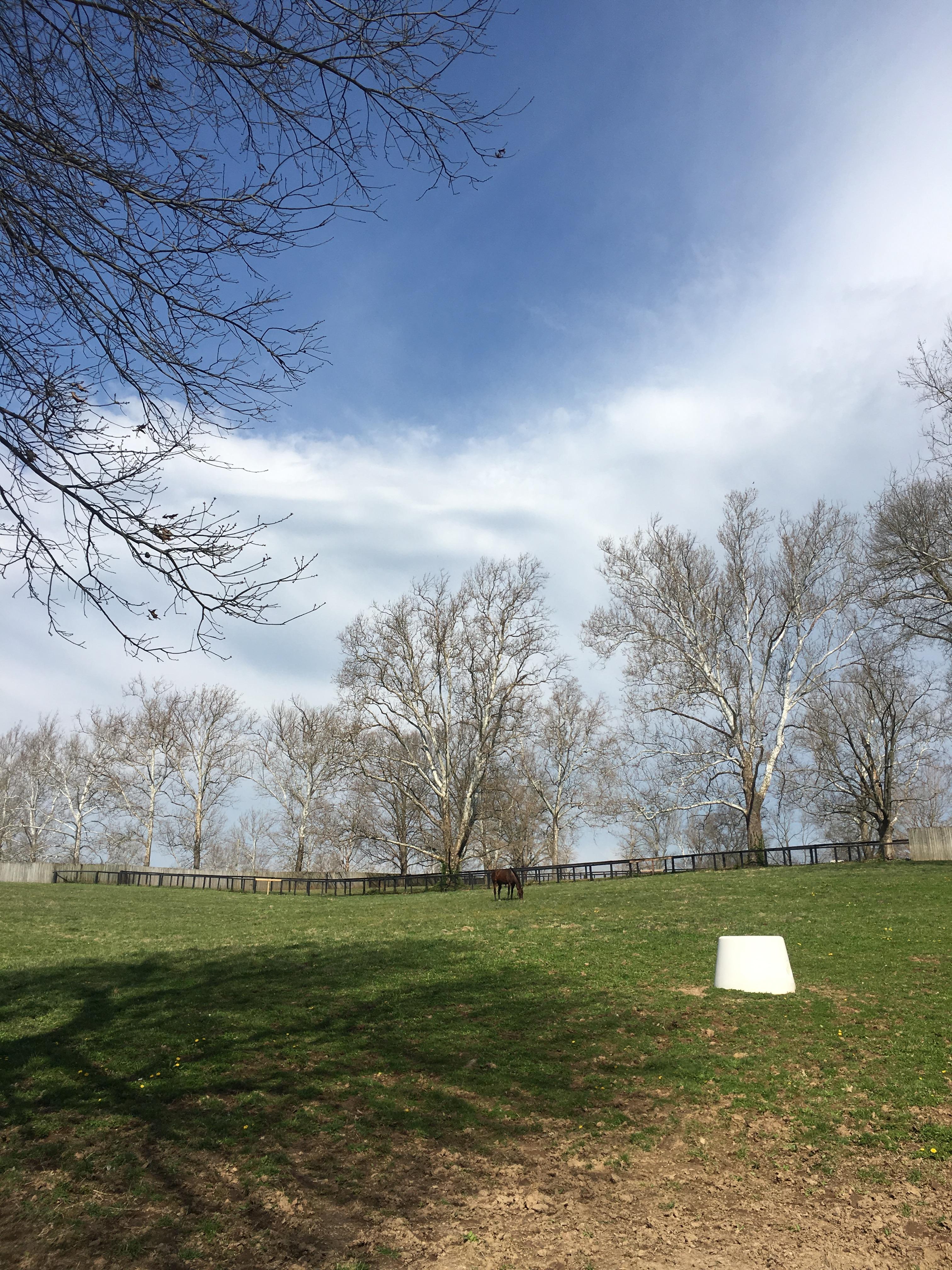 Runhappy grazing away happily and refusing to come see our tour group. All photos by Kristen Kovatch.

Halfway between Cincinnati and Lexington, I realized I could smell something filtering in through my car’s air system, an aroma I hadn’t smelled in months — grass. My drive from western New York down to Lexington had started in falling snow, but here in Kentucky, the sun was shining, the thermometer measured in the mid-60s and the grass appeared lush and green (at least compared to my damp, brown home state).

I was headed down to share my insights as a career speaker (shout out to the Georgetown College Equine Scholars for hosting me — you guys are destined for great things!) but also to make a weekend out of it, staying with friends and of course visiting some of the region’s equine attractions. Lexington, of course, is the capitol of Thoroughbred breeding in the United States and the cradle of some of the best racehorses in the world, and I was looking forward to touring some farms when my working engagements were over.

I never anticipated what a cross-section of the industry I would experience in just 48 hours.

“I love to take people to Claiborne,” my friend Allison confided as we navigated through Paris and out into the rolling hills just outside of town. “There’s just so much history.”

I could feel that sense of decades gone by as we turned up the driveway — massive sycamores that had to be almost ancient shaded the drive and the parking lot by the gift shop, a low building outside which we milled while we waited for our tour group to come together. With the Keeneland spring meet in full swing, tours were popular, especially on a warm Friday morning.

A handsome chestnut nodded at us over the fence just behind the gift shop, and a quick scan of the memory banks reminded me that this horse who was standing casually by watching visitors assemble was Lea, winner and record-smasher of the Donn Handicap and many others. I realized as I watched him amble from sun to shade that this would be a day of contrasts, a chance to see my living legends while also assuring myself that they were in fact real, living, breathing horses; meeting these larger-than-life characters I had only seen on the screen before was at once grounding and inspiring.

Our tour guide Rodeo took us first to the breeding shed, which considering how many Triple Crown jewel winners and Breeders’ Cup champions had been conceived there, was a surprisingly humble structure, containing pretty much everything you’d need but nothing you didn’t. From there, we moved on to the stallion barn, where the stall plates of past champions served as a reminder of just how long Claiborne has been around. 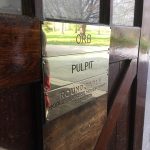 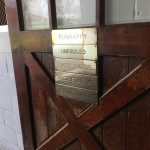 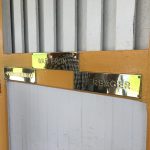 Claiborne has been in the Hancock family during its entire lifespan of operations, and that family helped shape the Thoroughbred racing and breeding industry since the early years of the 20th century. An early Claiborne dynasty consisted of the purchase of Sir Gallahad III, who sired Triple Crown winner Gallant Fox, who himself sired Triple Crown winner Omaha. As the farm passed down through the generations, the business model shifted, but it remained a full-time operation for the Hancock family, standing such names as Princequillo, Round Table, Nasrullah, Secretariat, Mr. Prospector, Danzig and Pulpit — the literal cornerstones of the modern Thoroughbred. The farm is now led by the fourth generation, Seth Walker Hancock Jr. 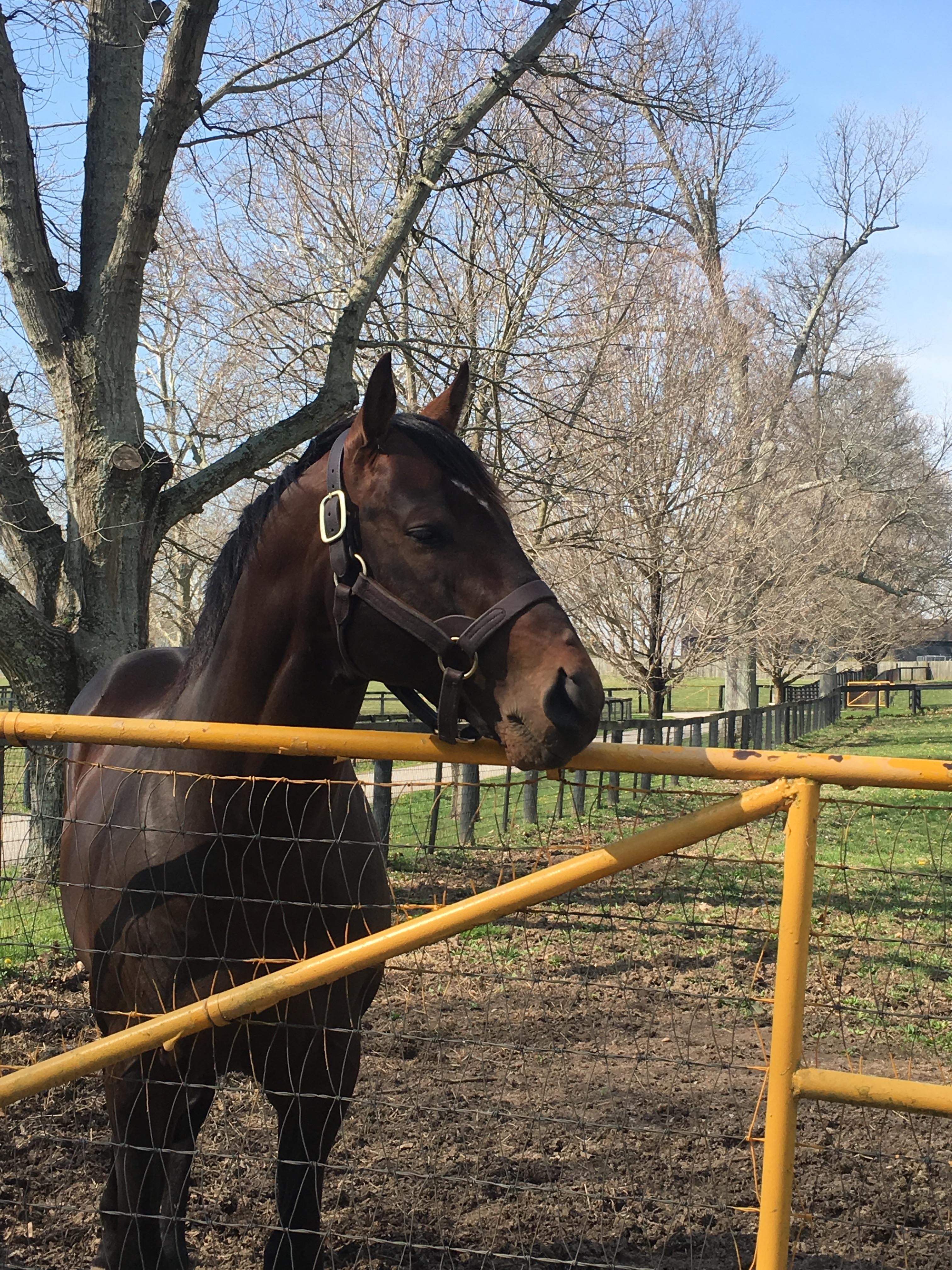 Orb. This was about as close as we were allowed to get, as he’s a bit of a biter.

From the stallion barn, we meandered along the bending path that was flanked by individual turnout paddocks. Claiborne is a firm believer that stallions, just like all horses, need plenty of turnout to stay physically and mentally fit, and with the stallions currently on a day turnout schedule after breeding in the morning, the entire roster was hanging out below the sycamores in their private kingdoms. We said hello to Orb and newly-retired (and very sweet) Mastery, while Runhappy and Flatter blew us off completely. 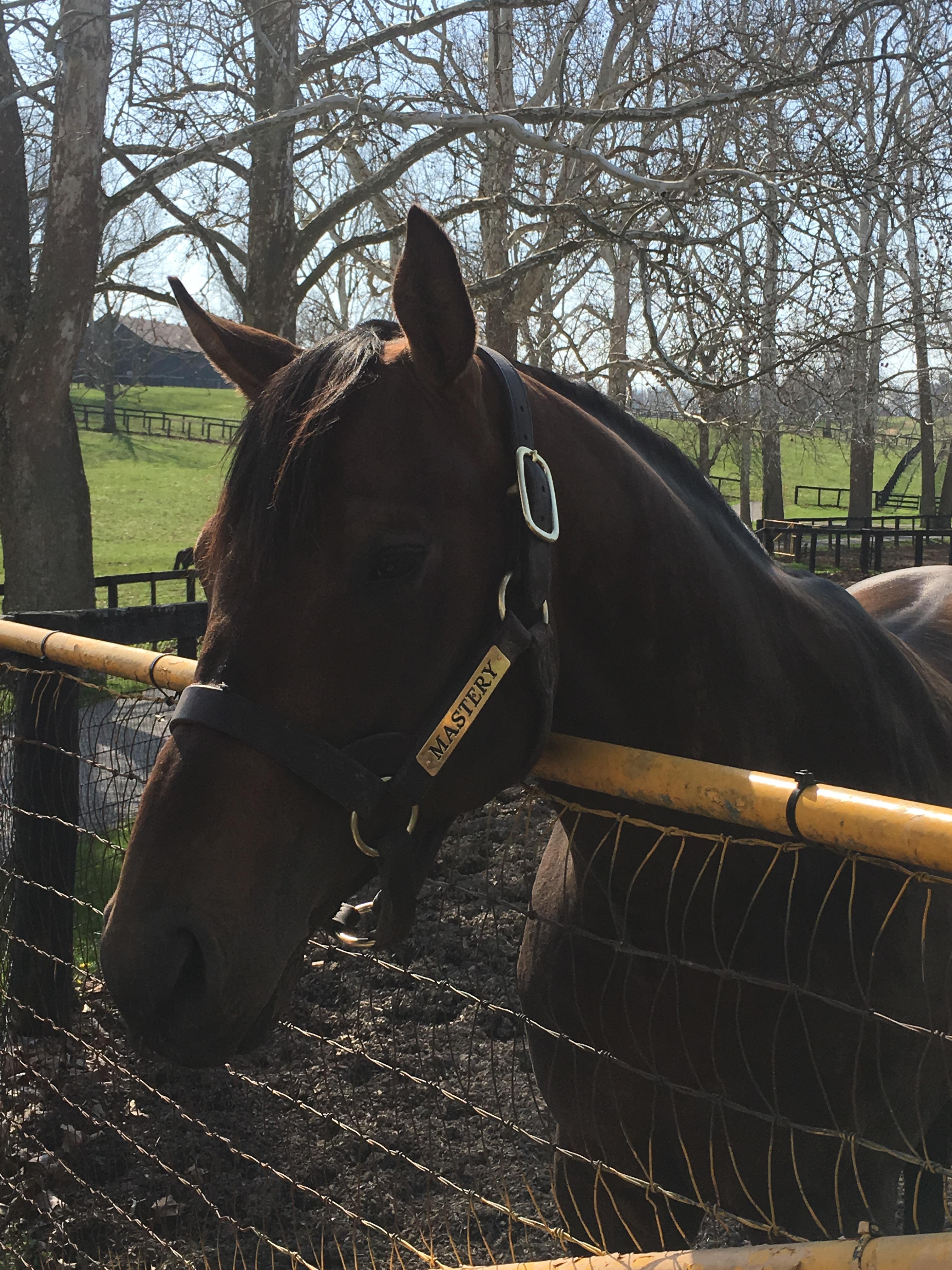 Mastery, just four years old, launched his stud career this spring. He was a personable fellow who enjoyed a lot of peppermints.

From there, Rodeo brought us to a hedge-lined paddock where a stallion was moseying along, grazing as he went: “I’ll bring a stallion out for everyone to meet. He’s a nice guy.” The nice guy, who each of us on the tour got to scratch on the neck and individually feed a peppermint, was War Front, the world’s leading international sire. He stood patiently with a loop in the lead, no chain, allowing all of us in our large tour group to come up one at a time, scratch him on the neck, pose for pictures and then politely eat a mint. The fact that the world’s greatest breeding stallion was still just a horse should have been an obvious concept, of course, but it never occurred to me that we’d be able to do more than simply gaze upon him from a distance. 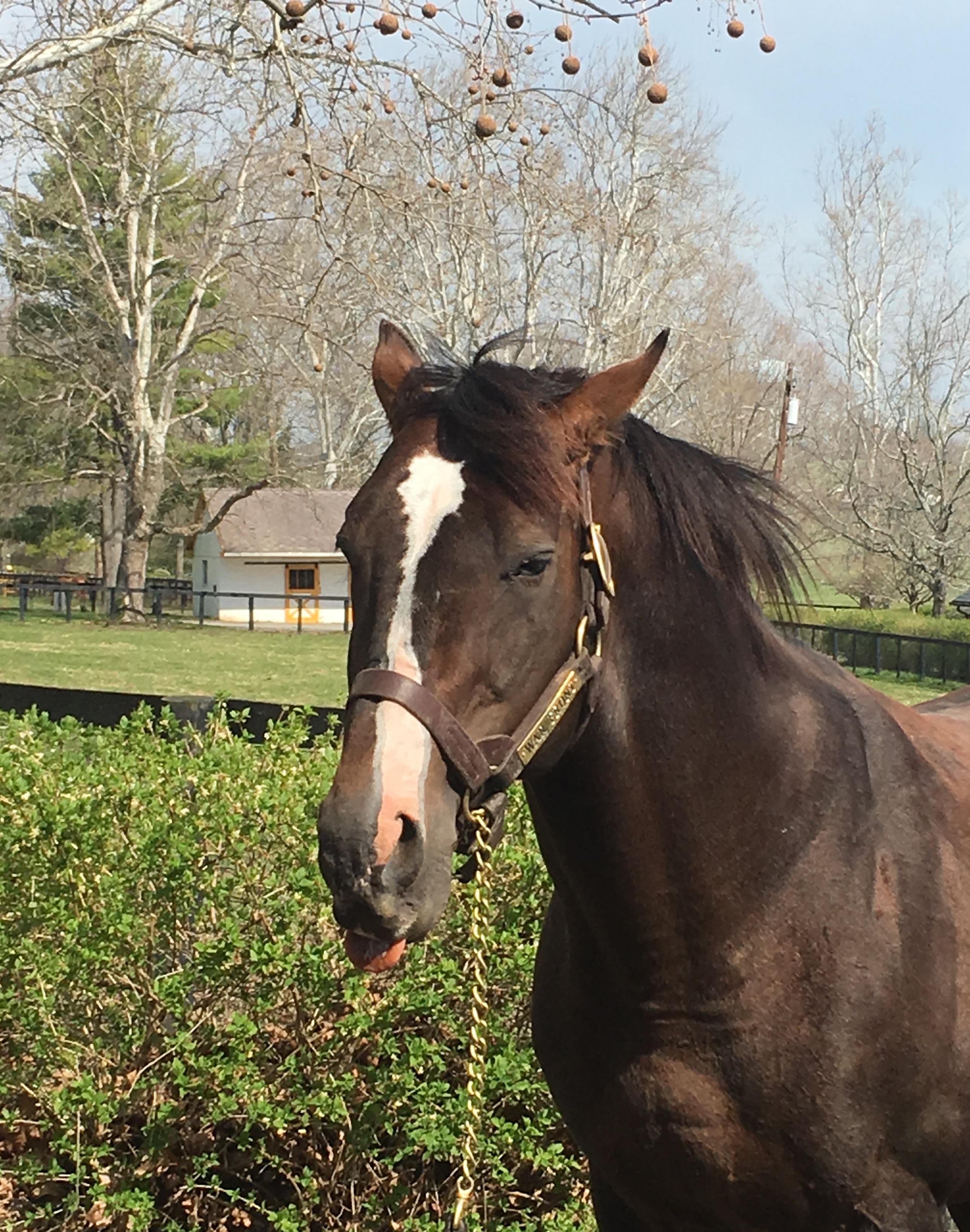 Hopefully Claiborne doesn’t get offended that this is the photo I took of the incomparable War Front. He might be the world’s leading sire, but he’s still a horse who makes derpy faces for the camera.

Our tour concluded in the Claiborne cemetery, where so many of the greats that shaped the modern breed have their resting places. As we strolled among the memorial stones, thinking about the legacy left by this single farm, I realized how unpretentious this whole place was. Yes, the facilities and property were impeccably maintained with every single thing necessary for the stallions’ health and comfort, and sure, Claiborne wasn’t shy about promoting the accomplishments of its horses — but there wasn’t a lot of flash and glamour, just a regal old farm, comfortable with its role in the industry and the direction in which it was headed. 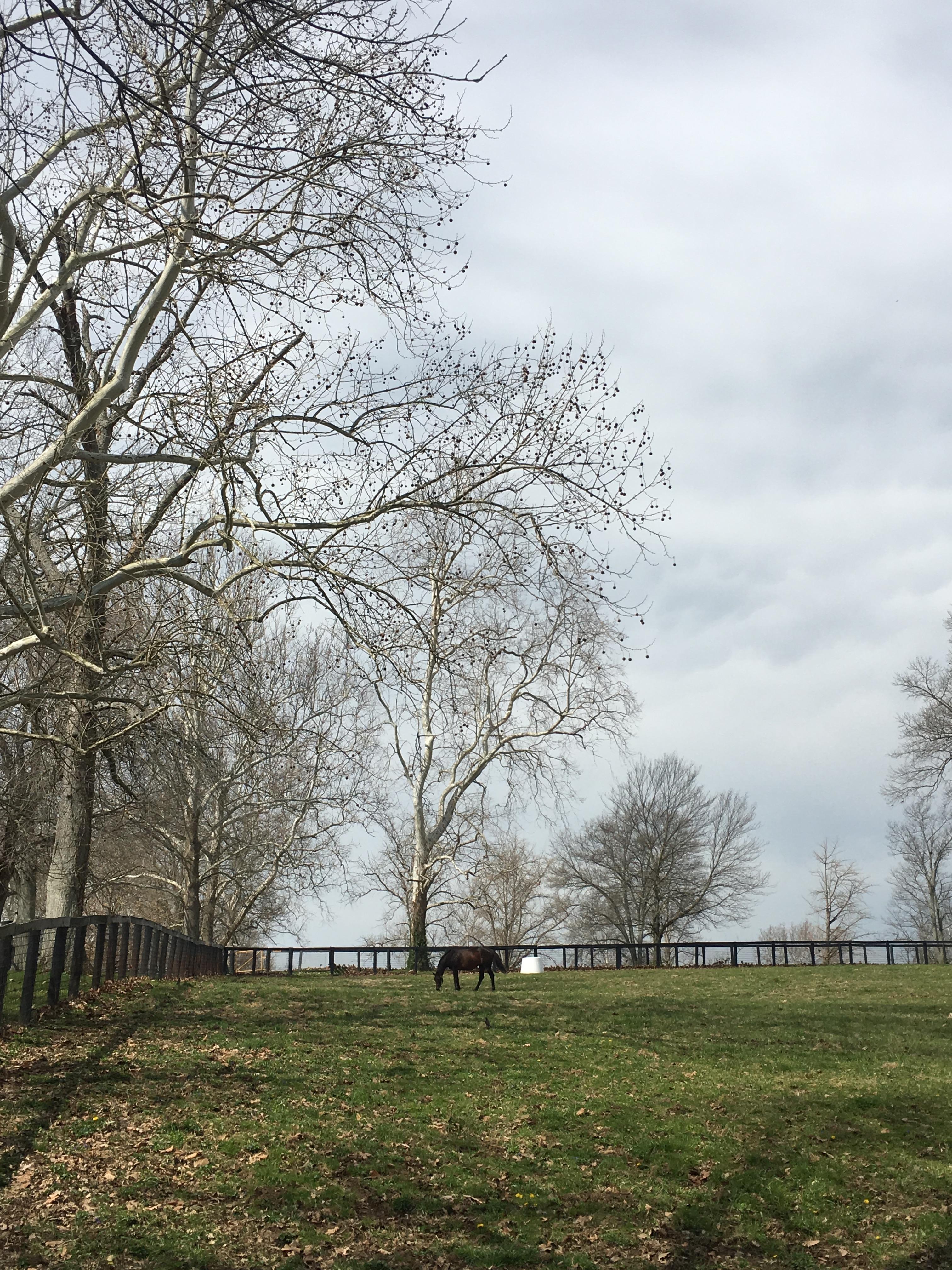 In Part II, we’ll visit a boutique mare and boarding operation at Dala Farm and the most grandiose of hobby farms at Jonabell Farm; stay tuned for Part III in which we head to Old Friends and Keeneland!