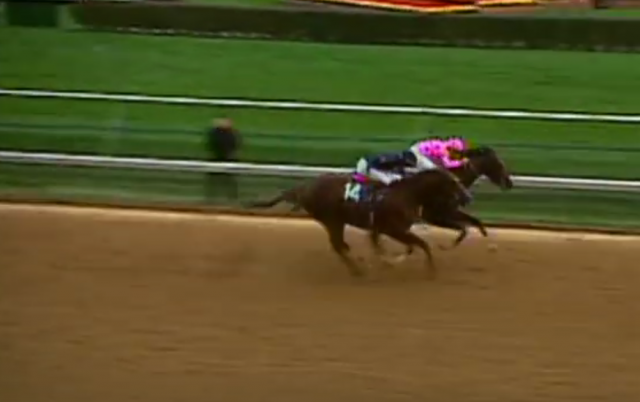 Regarded as the best son of the legendary Storm Cat, racing champion and sire of champions Giant’s Causeway passed away on April 16, 2018.

Giant’s Causeway will be remembered as a giant among horses, not only for his endeavors in international racing but as a sire of sires and broodmares in his 18-year career at stud. The great son of Storm Cat passed away on April 16 after a brief illness at Ashford Stud, the farm where he was born and the American branch of Coolmore Ireland.

Giant’s Causeway was trained by Aidan O’Brien at Ballydoyle in Ireland, and the colt turned heads as soon as he set foot on the track. He was an unbeaten Group 1 and 2 winner and won five straight Group 1 wins as a three-year-old in Europe. This latter feat earned him the nickname “the Iron Horse.”

Giant’s Causeway shipped to the United States to contest the 2000 Breeders’ Cup Classic, his final start and his only start on dirt. While he did not win, it became one of his most famous races among American fans due to his grit and fight all the way to the wire with Tiznow:

Giant’s Causeway returned to Ireland to stand at stud at Coolmore, but heavy demand from American breeders called for his return, and he stood at Ashford Stud for the rest of his career. His first crop sired in Ireland included five Grade I winners and a European champion two-year-old, and from that crop on Giant’s Causeway never looked back, continuing to sire winner after winner.

He topped the general sires’ list in 2009, 2010 and 2012, the first horse since Danzig to do so; he sired a total (so far) of 31 grade/group 1 winners around the world and founded legacies through his sons and daughters.

Do you have a Giant’s Causeway descendant in your barn? Share photos in the comments section so we can remember this stallion’s legacy.